My favorite type of fishing spots are typically those that are high risk but with the chance for high reward.  In fact, nowadays more often than not we’re pursuing these type of places; whether it’s spending time exploring new ones or returning to those that you just know that you haven’t seen its potential. So what happens when you make your first trip to a place like this and you end up leaving unsatisfied with how well you surveyed the opportunity and the “reward” is still uncertain? Do you give it another go or scratch it off the list? Afterall, there are too too many places to fish and too little time. Well, I find myself in this very predicament with an extremely unique lake. It will all make more sense after I describe the “risk” and the “reward” in a little more detail.

I’m gonna need your help! What would you do?

A year or two ago, Phil mentioned happening across a lake high in the Uinta backcountry while scouting for elk. As he and his buddy stepped closer to the small lake, Phil naturally began to survey its waters. Light was getting low but as he peered into the small lake he saw what appeared to be a 25″+ trout cruising near the surface. The image was seared into his memory and stored for a later date. A fish like that in a high mountain lake is a very uncommon sight – especially in Utah.

This last summer I found myself alone and in search of a place to get lost for a day or two. It was the perfect opportunity to head somewhere new. I looked through notes for those places I’d yet to explore. It was then that the memory of a past conversation came to mind. I called up Phil and got more details on this potential hidden gem. I was reminded – just as I was told the first time he told me about this lake, it’s a pain in the junk to find/hike into. However, Phil also told me more about this lake that made it simply impossible to pass up. After first discovering the lake, he had looked through the DWR’s records on this body of water and found that it was unnamed and hadn’t been stocked in the past 30+ years. Hmmmm….ok, sign me up?! A high alpine lake with a naturally sustaining population of fish with specimen over two foot? No brainer – regardless of how hard it was to access.

My dog, Boogie, and I pulled to a stop after a long bumpy drive. As I exited into the darkness of night, the sound of running water and crickets was joined by the type of hiss that makes your heart drop. A leaky back tire. Sweet. It was late so I re-parked to a spot that would make it a bit easier in the morning to switch out my spare and hit the hay. 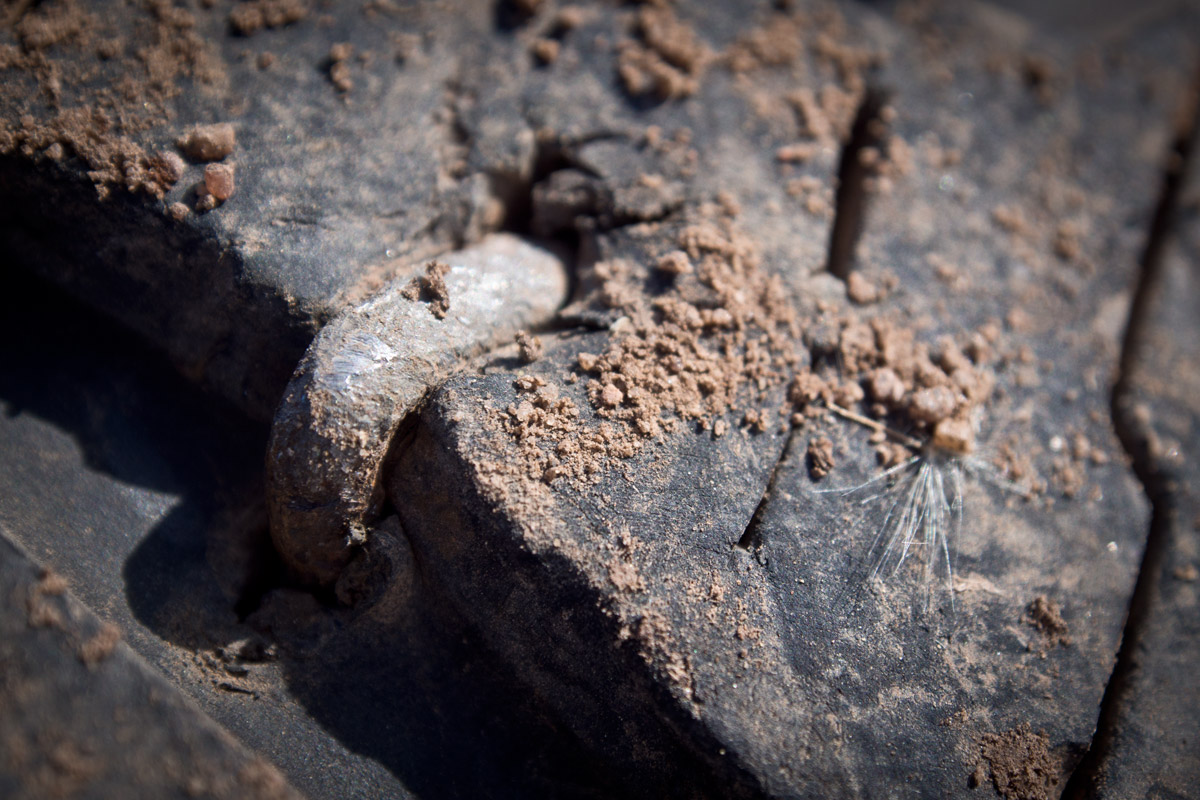 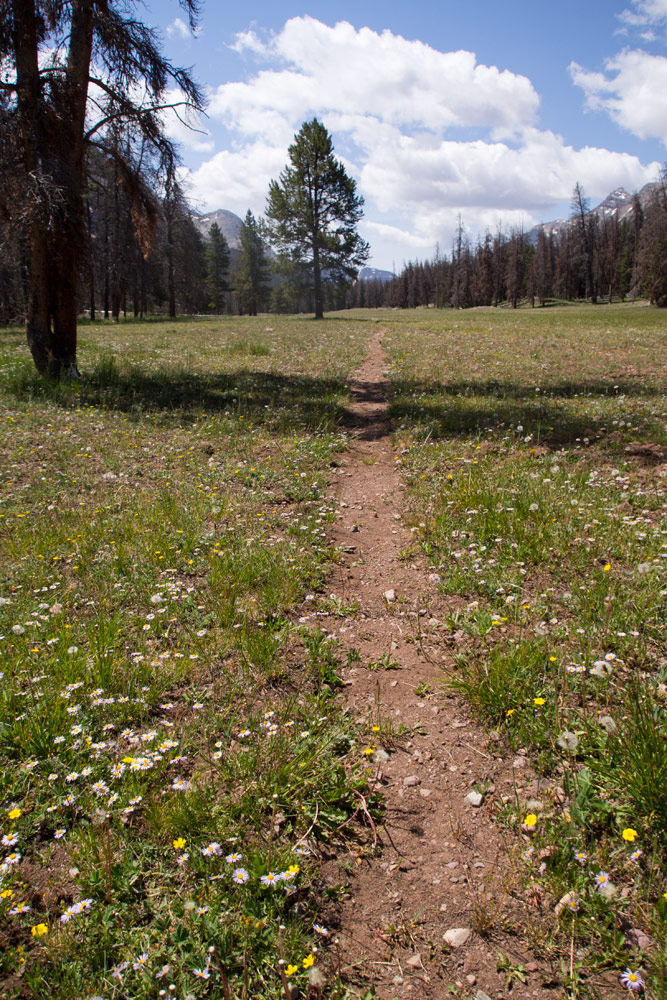 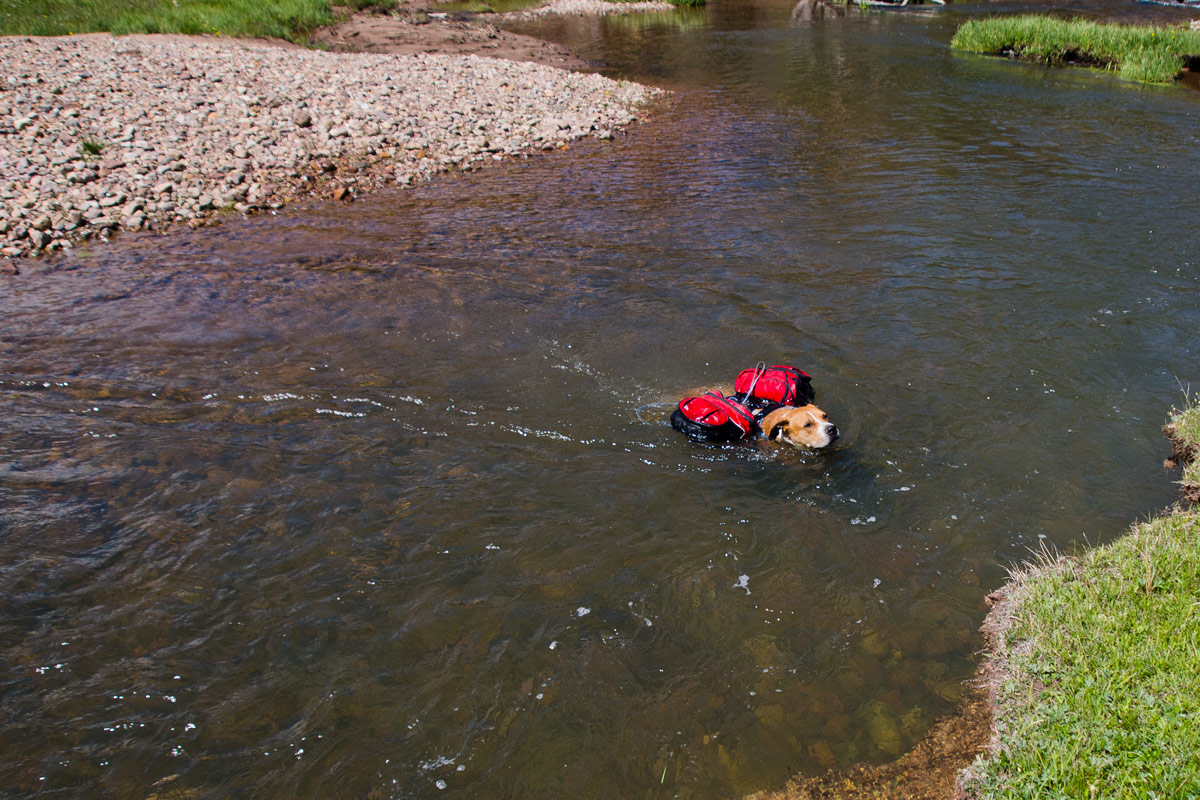 I woke from my slumber to a beautiful morning. It wasn’t long before we were on the trail. We made our way further into the broad valley. Around noon and after a few hours of hiking, I arrived at the beginning of the real ascent. I had fishing gear packed, multiple days of food, and  a tent since rain was in the forecast so my pack was over a third my body weight. It was about to get gnarly. The next leg included no trail and over 1000 vertical feet of gain in less than a mile with no trail. Boogie looked ready so we charged it. Basically… the next hour was super rad. Oh ya, I usually hike in Chacos too. 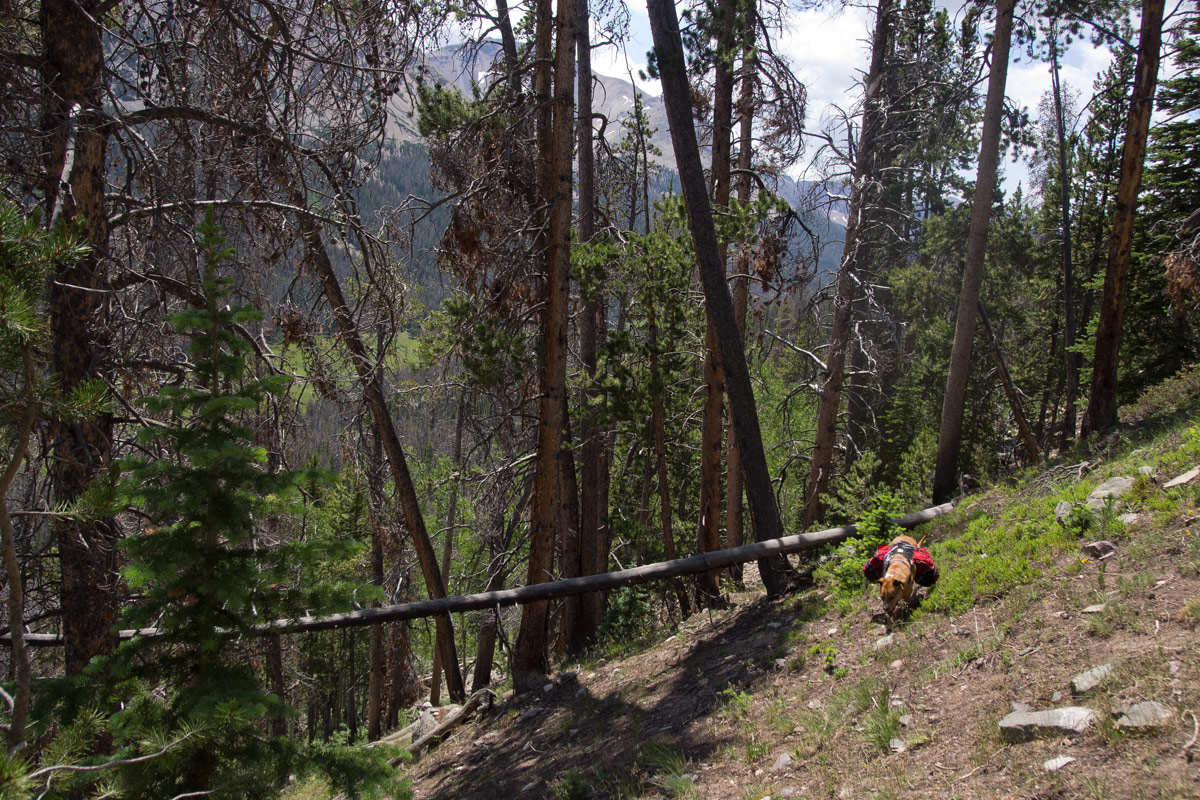 We found our destination at the base of a rocky hillside that was still partially covered with snow. It was dead silent. I dropped my pack and Boogie and I rehydrated and took in the surroundings. I couldn’t help but notice some extremely light-colored shapes making their way along a very pronounced drop-off. I also couldn’t help but engage so I immediately grabbed my all-time favorite rod (the LOOP Cross S1 386-4) and rigged up. After a few misses I hooked my first zombie cuttie. The fish were collectively the most peculiar specimens I’d seen. They all seemed healthy (all 15-18″) and overall were great size for high alpine fish but they were all very pale and appeared kind of sickly. It’s hard to describe so I’ll let the pictures do the talking. The contrast agains the red rocks was striking. I caught a few of the zombies before they headed for deeper water. 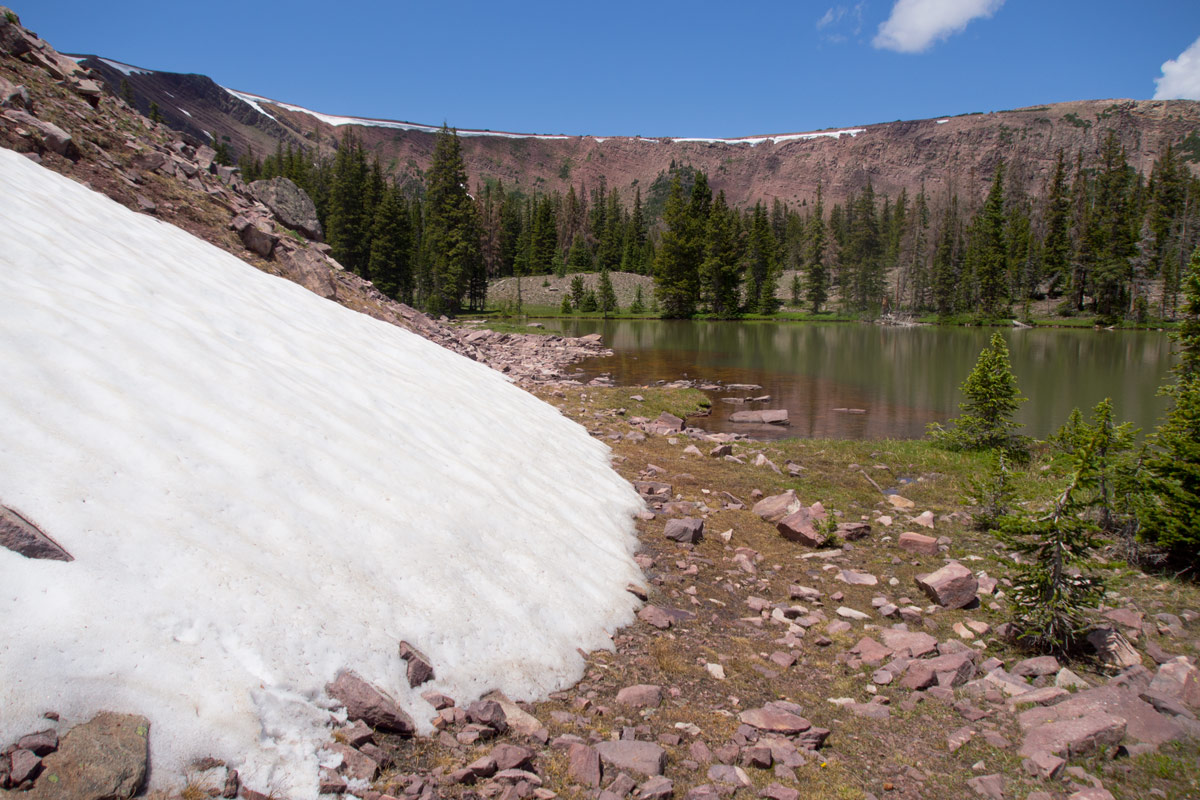 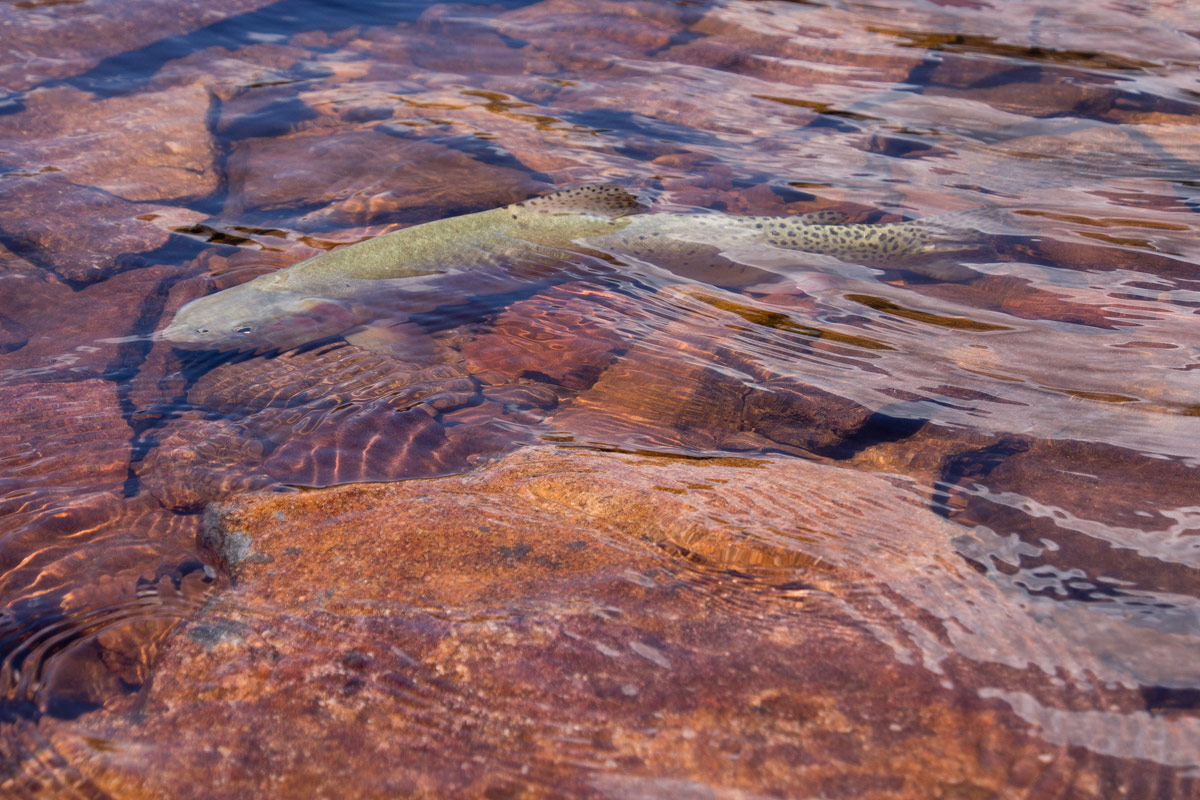 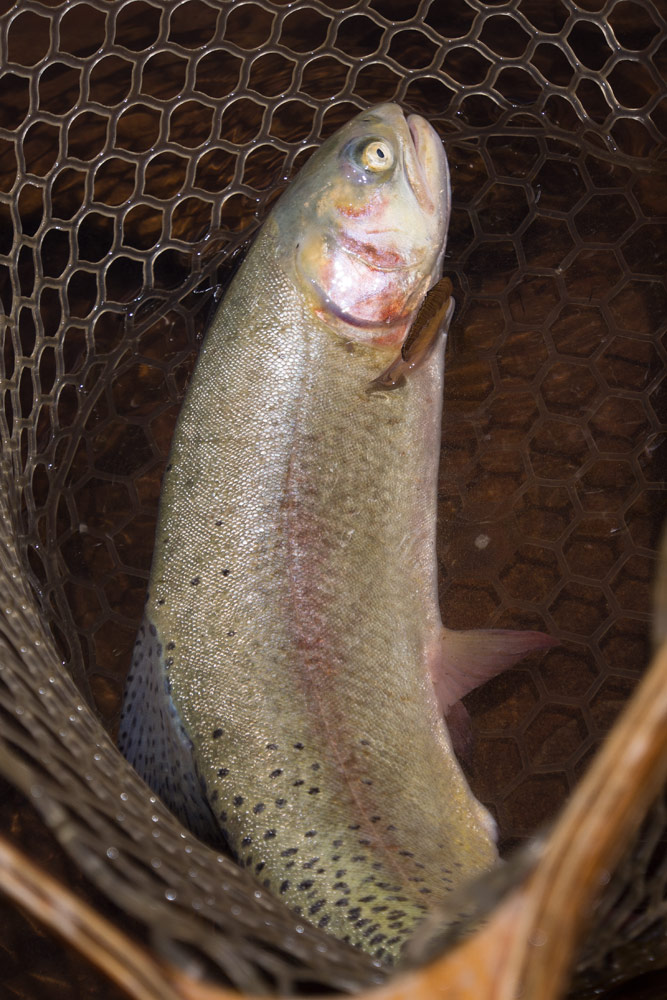 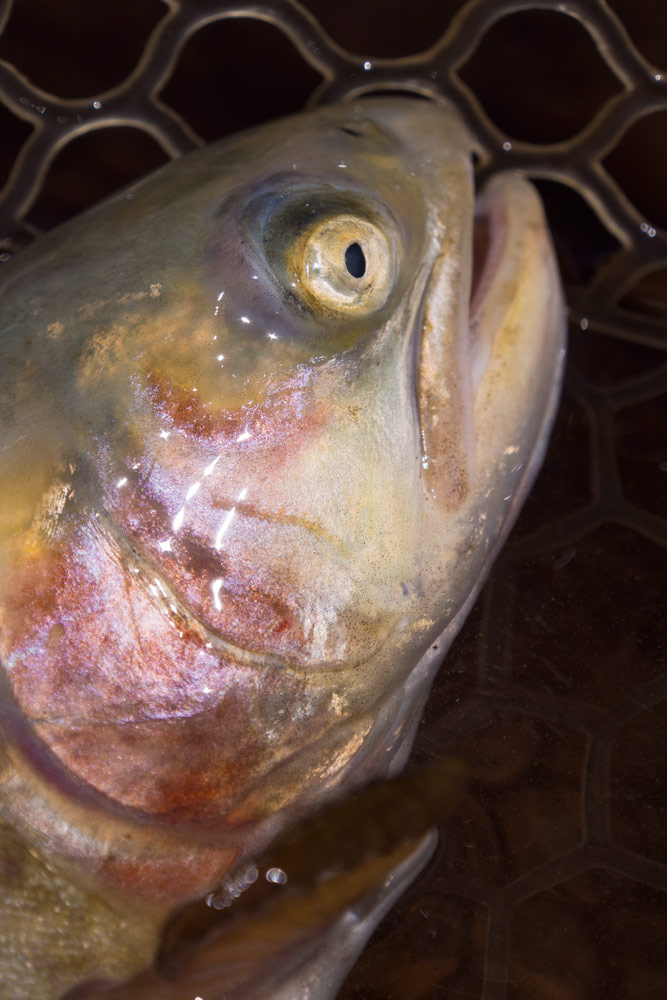 After the fish left for deeper waters, I took the opportunity to reflect on life for awhile. Life is busy and my mind often moves around very quickly so it’s often somewhat of a challenge to really get the opportunity to spend time thinking free from distraction. I did this for an hour or two. Boogie didn’t seem to mind as he lay sleeping in the sun. What happened next was really odd. After coming back from my thoughts to ‘the present’ I felt strongly that for whatever reason, I needed to leave the lake. This wasn’t a very appealing thought considering I’d only arrived a few hours before, I don’t like to ignore feelings like that so I made the decision to do just that. 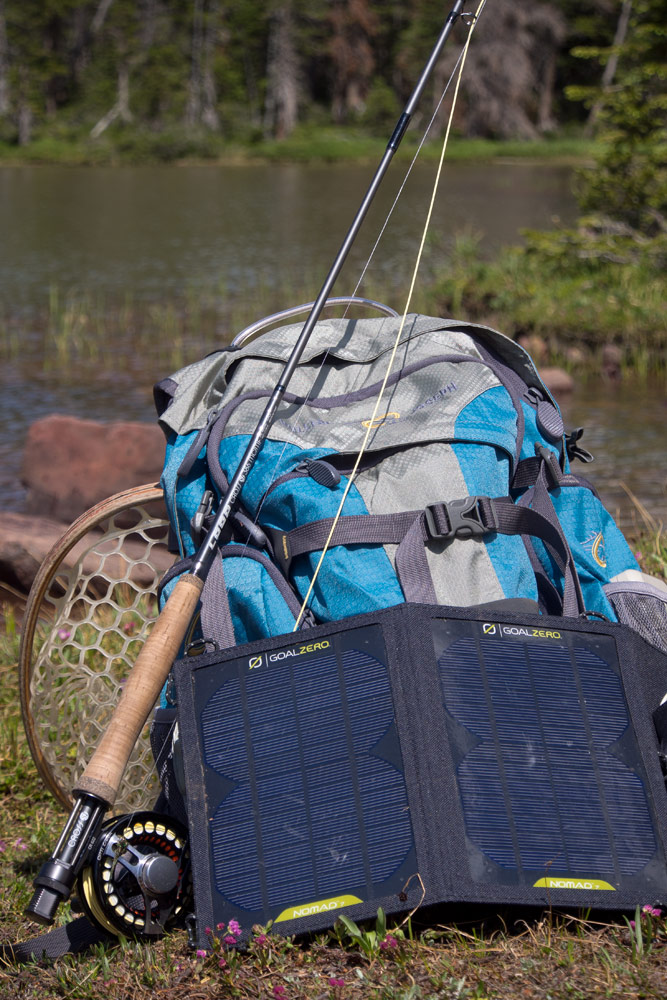 Before I packed up, I climbed up the rocky hillside a little higher to look out over the lake. It was only then that I thought of something…if these fish had been in here and naturally reproducing without a total winterkill anytime in the last 30+ years then this lake has to be pretty deep. It’s a tiny lake. It’s 150yds long and about 65 yards accross. I wish the water wasn’t so milky that day so I could have gotten a better idea of the topography of the lake. As a result, I have a grip of questions circling in my head: how deep is it, why do the fish look so weird – is it dietary? What are they eating? Are there a good number of sizable fish in there? Does anyone else fish this lake? All these questions lead me back to another question – DO I GO BACK? Is it worth taking the time to go back versus going somewhere else? Is it worth the hike? Is it possible to effectively fish it without staying the night? Are those crazy-looking fish worth it – even if there are some thugs in there? Do cucumbers taste better pickled?

What do you think? What would you do? To return or not to return – that is the question.

As not to leave you hanging, we ended up hiking down to the valley and setup camp there. Needless to say, hike down was much more pleasant than the hike up. We fished for small brookies and whitefish until an evening storm rolled in.  I took refuge in my tent and Boogie tried to guilt trip me into letting him join me in the tent. Instead he took refuge from the downpour in the vestibule. After the rain subsided we enjoyed a quiet evening in a beautiful valley. Ultimately it was an awesome trip to the mountains. So now I need you to help me decide. What would you do and why?