I don’t even recall when we arrived at our ultimate destination in Wyoming. It was late. I swear we get dumber and dumber the more we fish together. We parked, rolled out the Thermarests and sleeping bags, and hit the hay. This is seemingly becoming the norm. Despite our excitement to hit some new water in beautiful surroundings and the potential for some hogs, it didn’t take to long for our typical late night nonsensical, candy infused jokes to die off and to quickly fade to black.

Steve Jobs brought me back from the dead as the sky was slowly getting light. We rubbed the sleep from our eyes, stepped out into the cold, and gazed out at our home for the day. By day’s end we would assuredly see every inch of the water that lay in the valley below us. We talked tactics as we rigged up and packed our packs with the necessities for the day i.e. fly boxes; water; and the usual granola bar/cracker assortment that would serve as our breakfast, lunch, and dinner. #idiots

The water we would be fishing was broken into an open, meadowy section and an intense canyon section. We started with the meadow section that lay before us knowing that fewer people would be willing to venture into the rugged canyon downstream. This section is usually under a TON of water but with the river a fraction of it’s normal size it’s reduced to a “meadow”. I use that term very loosely. It didn’t take terribly long for other anglers to make their way to the water and and in our haste we skimmed over some productive water. Neither of us are very used to combat fishing. I’ve always gone through great efforts since I began fishing to avoid people. My perfect day on the water is usually one where I don’t see another soul out on the water. Obviously, this is not always possible when it comes to moving water, but I honestly don’t have a lot of experience sharing water with those that are not in my group. 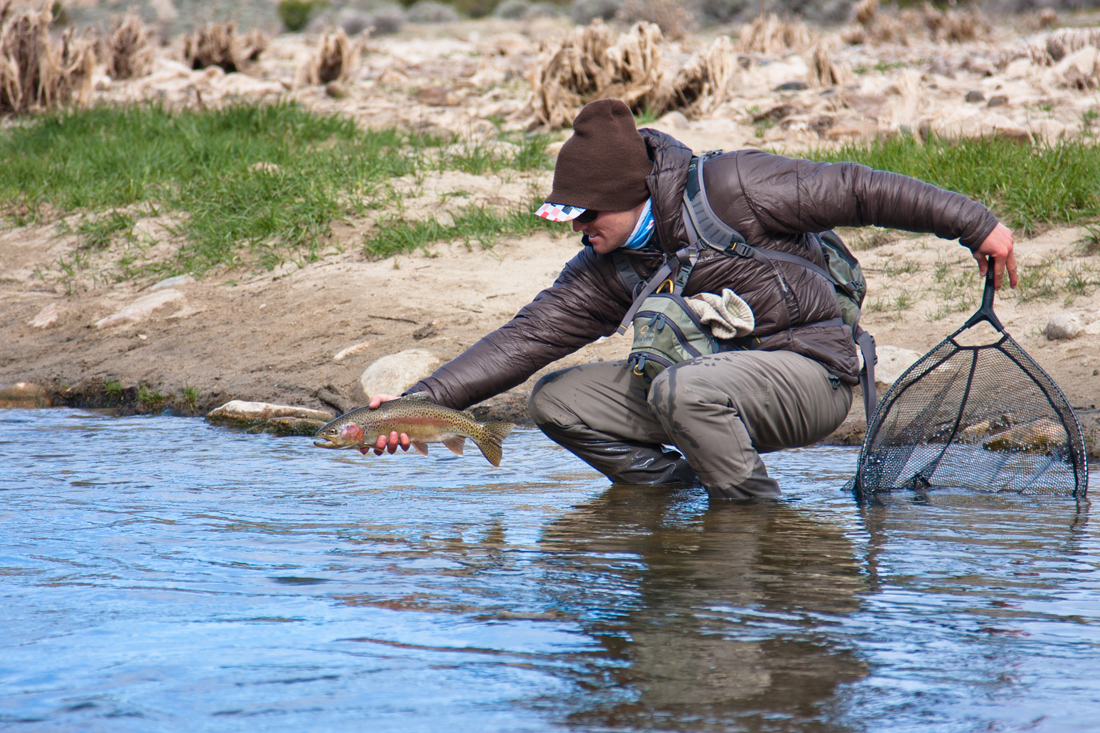 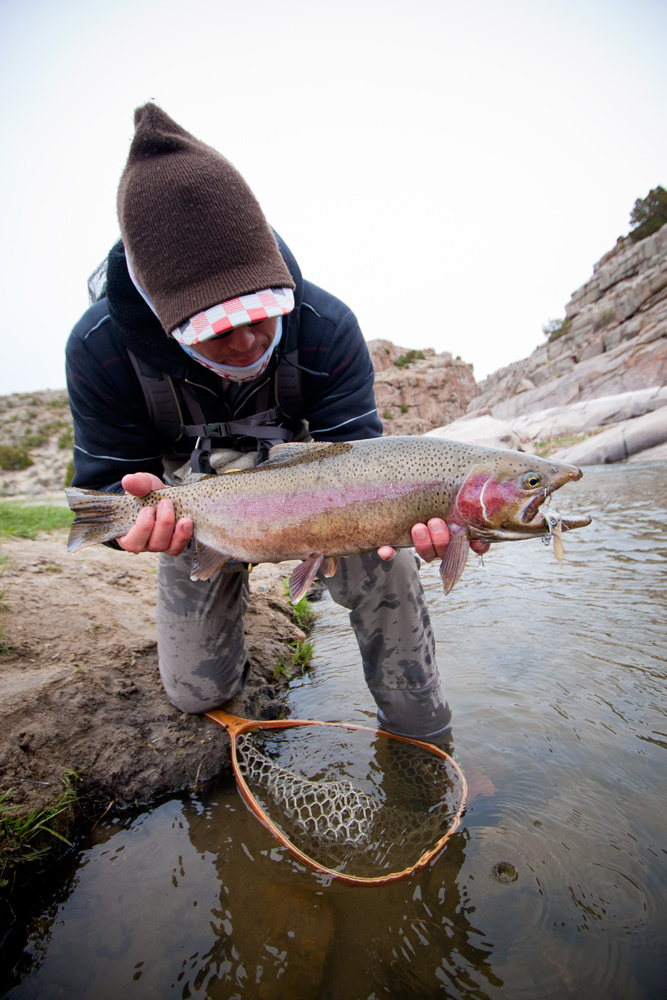 We picked up a couple fish but soon leapfrogged a few groups to find ourselves at a deep run shortly above the mouth of the canyon. It was fishy and you could see fish holding deep. Derek tied into a few here including a decent male on a streamer. We entered the canyon where we’d heard rumors of fish over ten pounds coming with some regularity at certain times of the year. This rumor was confirmed by a group of guys that told of a lost fish the day before. The canyon was harder to navigate than any I’d ever fished. It was made up of large boulders that test your footing. Sketchy to say the least. A misstep would undoubtedly end in a swim. 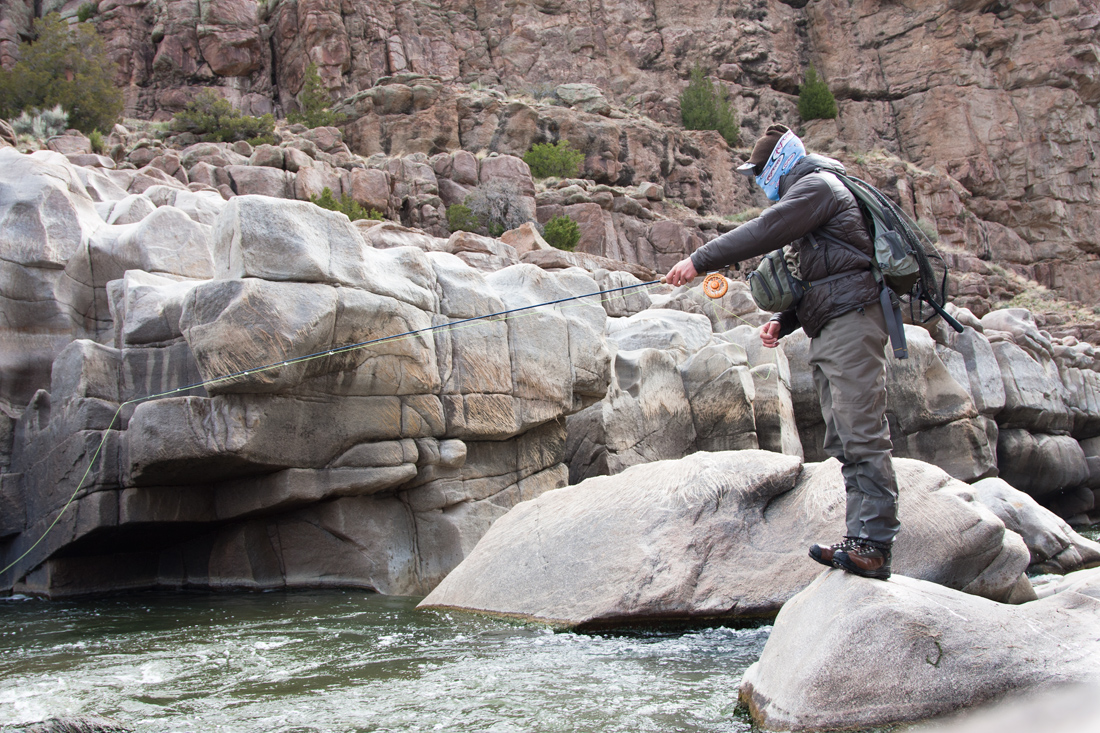 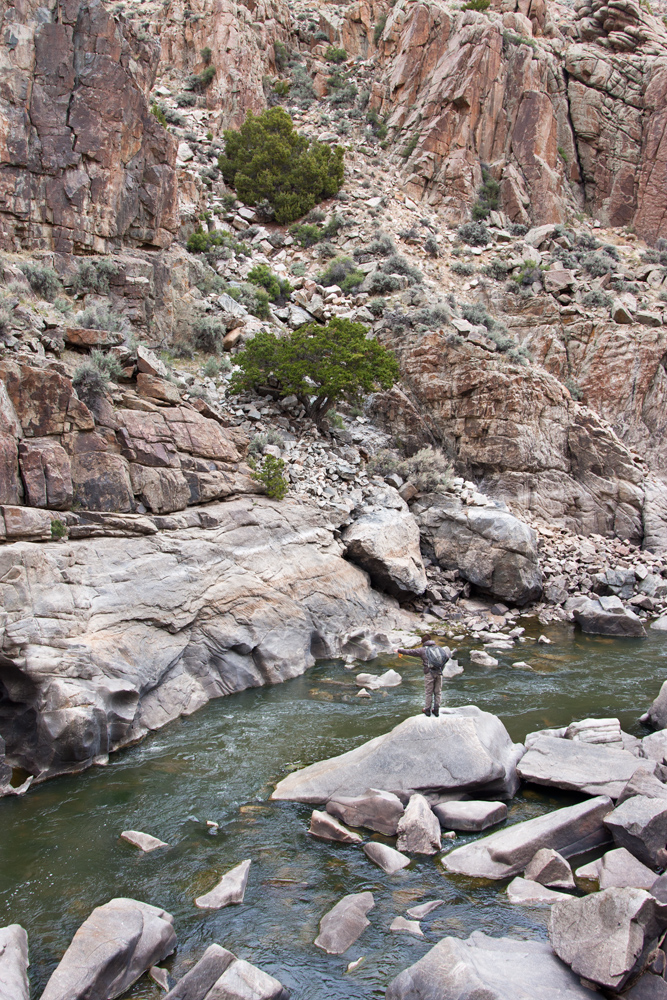 The slow/flat water that dominated the canyon demanded patience. It was a unique and breathtaking place to fish. The landscape piqued interest and our curiosity took hold of us and we trekked a good ways down the canyon climbing up and down the rocky “banks”, slipping and sliding on rocks, and making calculated crossings. It was tedious work but it seemed we just had to see what was around each bend. The river has a extremely low number of fish per mile and the canyon made us work for our fish (when we actually stopped our trekking long enough to fish for very long). It was a beautiful setting to hook into some really powerful rainbows. I can’t imagine it at normal flows. 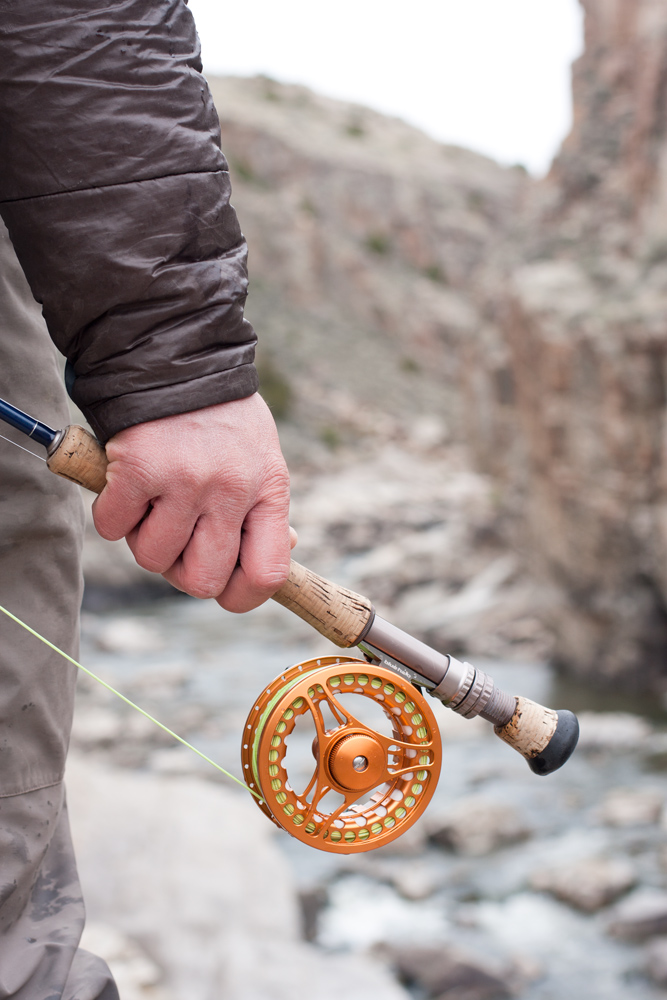 That would be a lot of water. After good part of the day spent trekking in the canyon we decided we were tired (literally) of hoofing it up and down the rocks and the canyonside. We painstakingly made our way back to the mouth taking the to high ground for easier goings. We stopped here and there to fish and were never let down by the undeniable power of the fish in this river. They were a blast to play in the slow, deep wanderings. Right at the mouth theres some water that’s simply irresistible so we made sure to give it another go. I’m glad we did cause not only were there more fish but I got a photo sequence that, after processing, I was pretty stoked about (in spite of crappy lighting conditions all day). 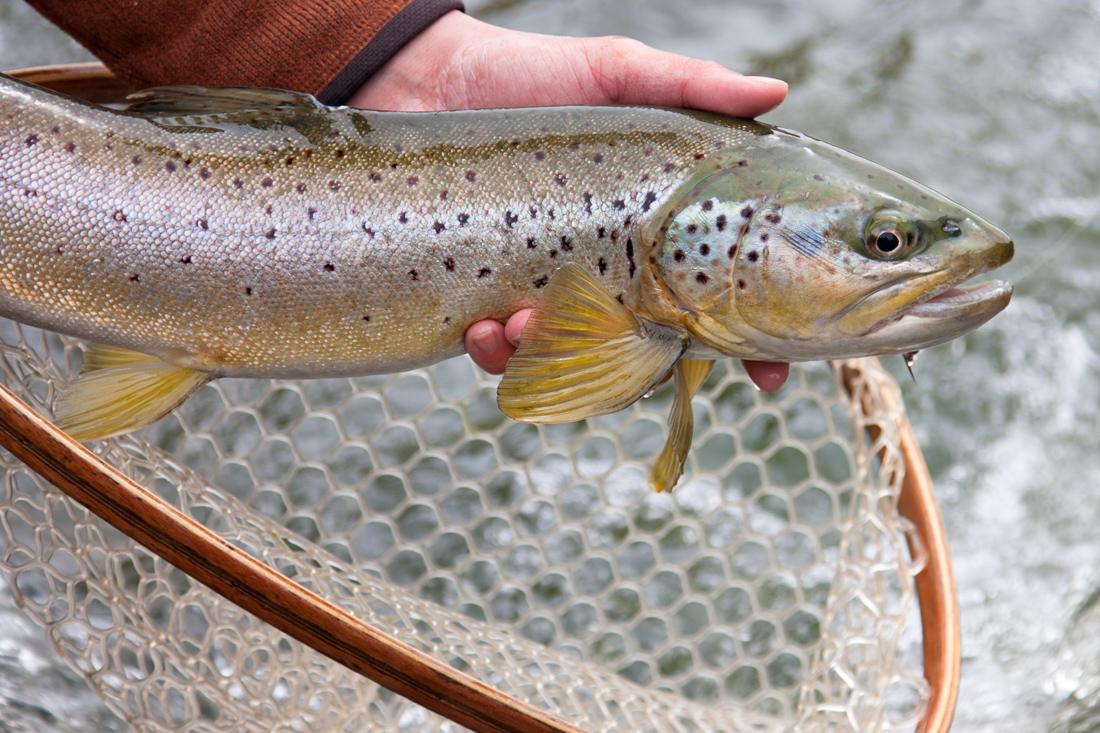 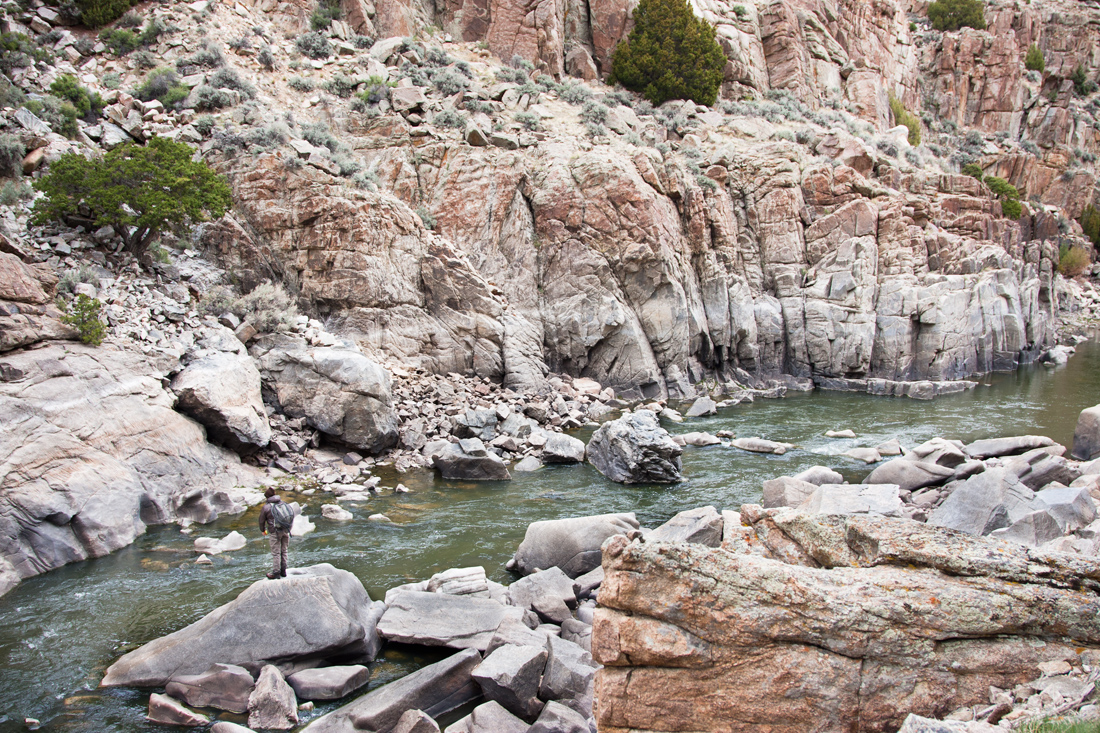 There were a couple parties still within site working the meadow section. One group (a guide with a couple clients) was working the same run they had been working literally all day. Weird. As we worked past them we noticed that there were fish – nice ones at that – that were taking shelter in shallow pocket water right out in the open. It seemed odd for the middle of the afternoon but we began to focus our efforts stalking similar waters. This proved to be very productive as we hooked into fish after fish fishing tight seams and small pockets. These fish were HOT! It seems that I’m being reminded over and over how much I really love rainbows. They fight like they mean it! Each hookset was immediately met by stupid strength. That 30 yard run strewn with rocks was the highlight of the day for me. I’d cast over and over to get the perfect drift in the swirly waters. I could feel each take coming. You could just feel, “Ahhh yeaaah…THIS is the drift I was going for.” And sure enough a psychotic rainbow would agree and hit and run. 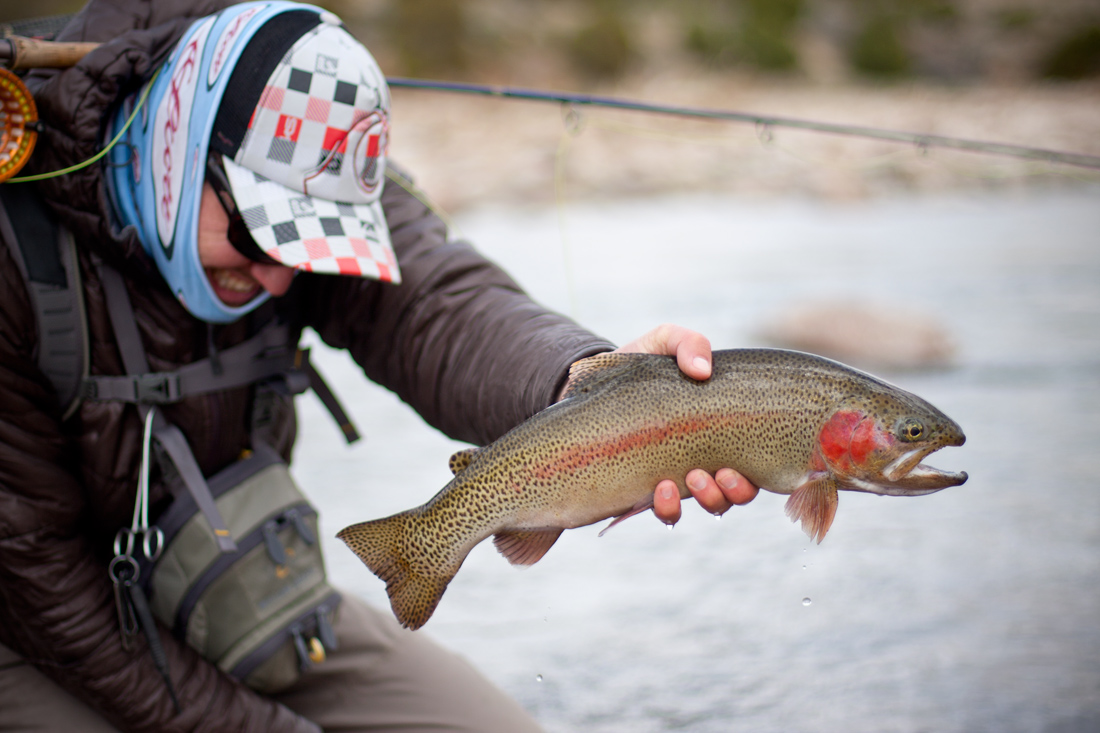 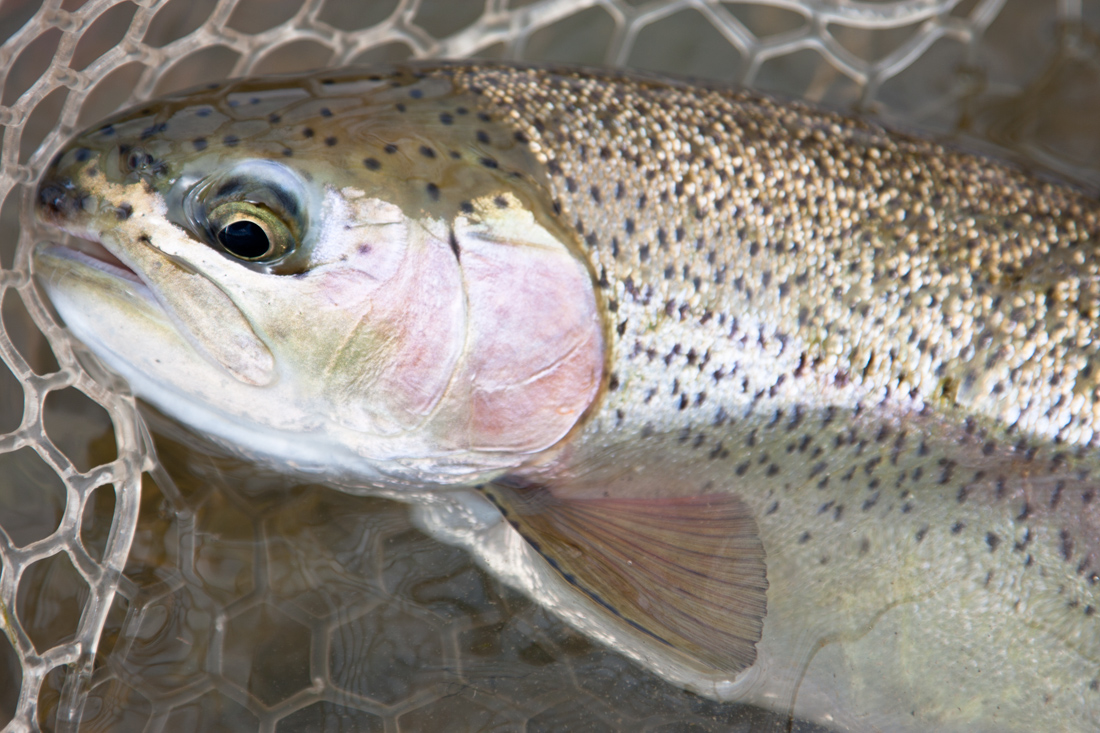 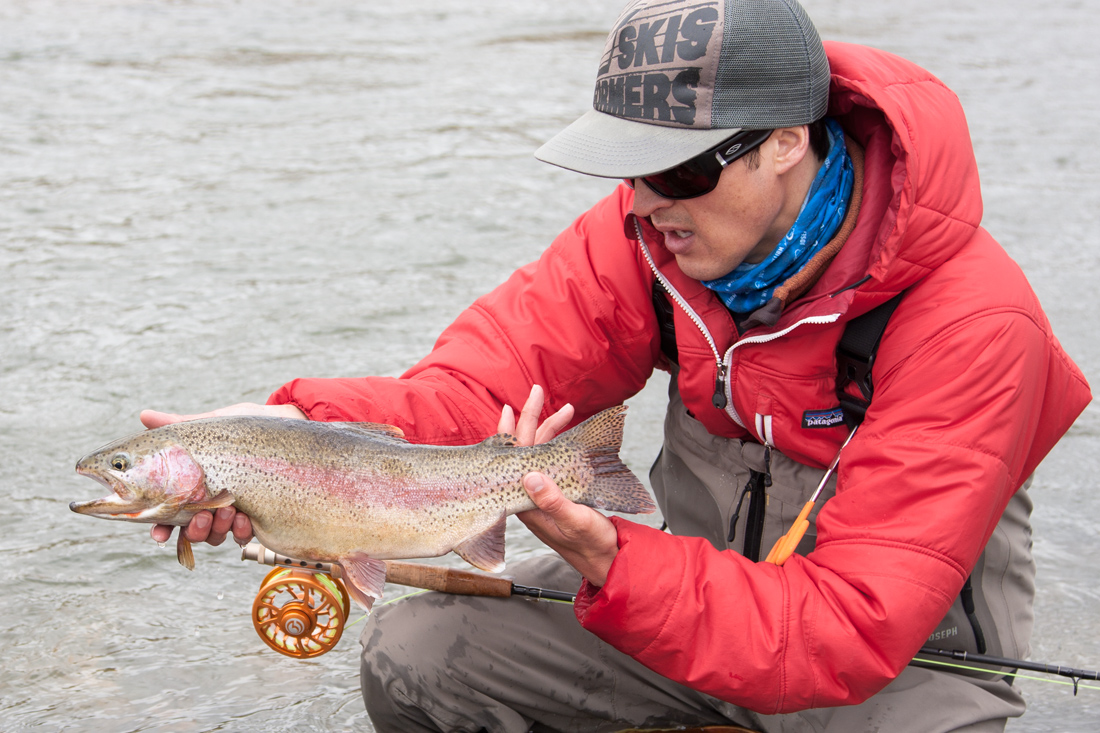 By the time we wrapped it up there was no sign of anyone else on the water and we regretfully headed for the car. I looked forward to the drive home. Cause another six or so hours in the car is a perfect way to end what began with a long drive, fishing, more driving, a few hours of sleep, a full day of non-stop fishing…if you’re a freaking idiot.