Those spots…oooooweee! Those colors…daaaaaang! Those….shoulders? Ahhhh yeah. No matter what type of fly fishing you do, it’s hard to deny that brook trout are just plain ugly. Before I ever even had the opportunity to catch one, I was creepily obsessed like only a true hater could be. I knew the spots that held them and also knew they were out of reach to me and my bike. My mom wouldn’t drive me that far, but I knew that one day they would be mine, oh yes, they would be mine.

It wasn’t until a boy scout camping trip to the boulder mountains when I was probably 14 that I finally got a chance to throw a fly at one. I still remember the experience quite well. As the sky grew dark, I finally found a riser within casting distance. A second rise revealed is cruising direction and I placed my black gnat (with a red tail of course!) a few feet in front of the last rise form. It didn’t sit long before another rise resulted in a tight line and a pretty excited kid. I held that fish in my hands and screamed out for my paps to come and behold the fish I’d been raving about. He even grabbed some video on our Hi8 I think.

Over the years, my hate for them has matured into a special kind of hate that others don’t understand. You see, aside from their apparent heinous appearance, brook trout hang out in some horrible looking water. You see, brook trout need cold, clean water. This means you often find them in some in high alpine armpits. It’s not only the lakes that are ugly, but it’s the particular places they hangout and their personalities that I also find quite repulsive. Brook trout don’t cruise as much as other trout, they tend to hang out – like total chumps. Often in heavy cover. They remind me a lot of largemouth bass and big bad browns hanging under a gnarly rootball – only more stupid. They love structure. I find structure a total drag to fish – especially when lurking brook trout tend to eject out of their lies when a perfectly good fly swims past. For me there’s few things more annoying than pitching a fly by a sunken tree and waiting to see a football come out and smash a fly that I spent time tying.

If you still don’t understand my distaste for brook trout, let me paint you a little picture. It’s a beautiful fall day. I awoke in my car to frosty windows. The cold made the sound of my alarm that much more unwelcome. Exiting a warm sleeping bag on a cold morning is never fun – especially when you have a bunch of gaudy, colored-up brook trout awaiting  you. I coaxed myself out started my car and began to wader up. There wasn’t a live creature in site. After a warm breakfast and with my pack loaded up I headed out for my first destination. The lonely lake was mostly covered in ice. It had some interesting structure and due to the lakes clear waters, it didn’t take long to find the fish. They were feisty and ate my offering with urgency. I switched between casting to the lake’s unique structure and seeking out fish to sight fish. I couldn’t believe I’d hiked in just to fish these overly-eager little fish. It wasn’t fun at all.

Despite the fast fishing, the morning was beautiful and peaceful. With blue skies above, my disapproval with each fish sounded out across the small lake until it met the trees on the other side. The fish were willing and in between fish I contemplated the rest of my day. It was still early and I’d had my fill of this lake. There were other options on my mind. Some bigger gambles (and longer hikes) than others. After soaking in the sun and weighing the options I decided to blitz for a curiosity play. 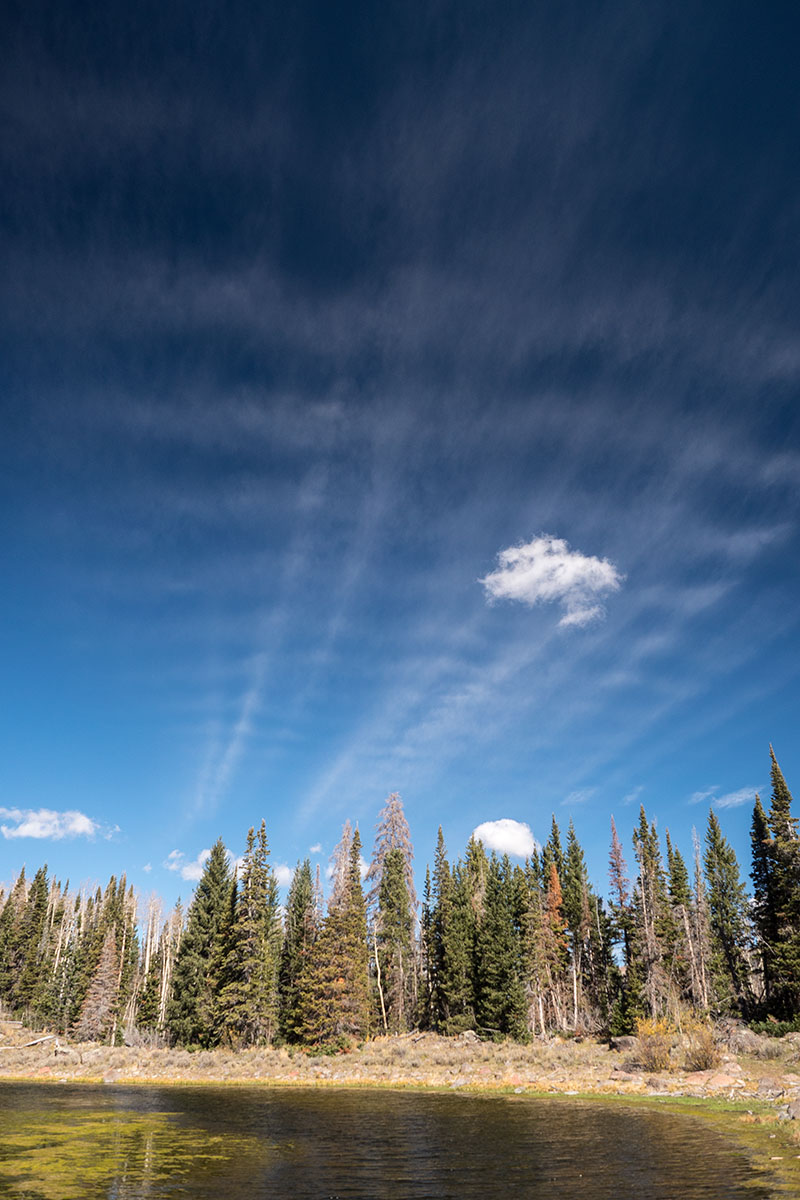 After a rough road into further solitude I reached the end of my road and eagerly dawned my pack and grabbed a couple rods. I approached the area of lake I planned on fishing with a high level of stealth. Didn’t want those little fetchers to hear me. The lake was laden with fallen trees and looked quite repugnant. I found a large fallen tree and chose that as my approach; lots of “interesting” water around it. The first fish I spotted was in some pretty tight quarters. Probably the tightest I’ve ever fished. Prick. It was rummaging between a bunch of debris and finding refuge under a root ball of sorts. He ate and somehow I managed to get the little psycho out of the debris and into the net. 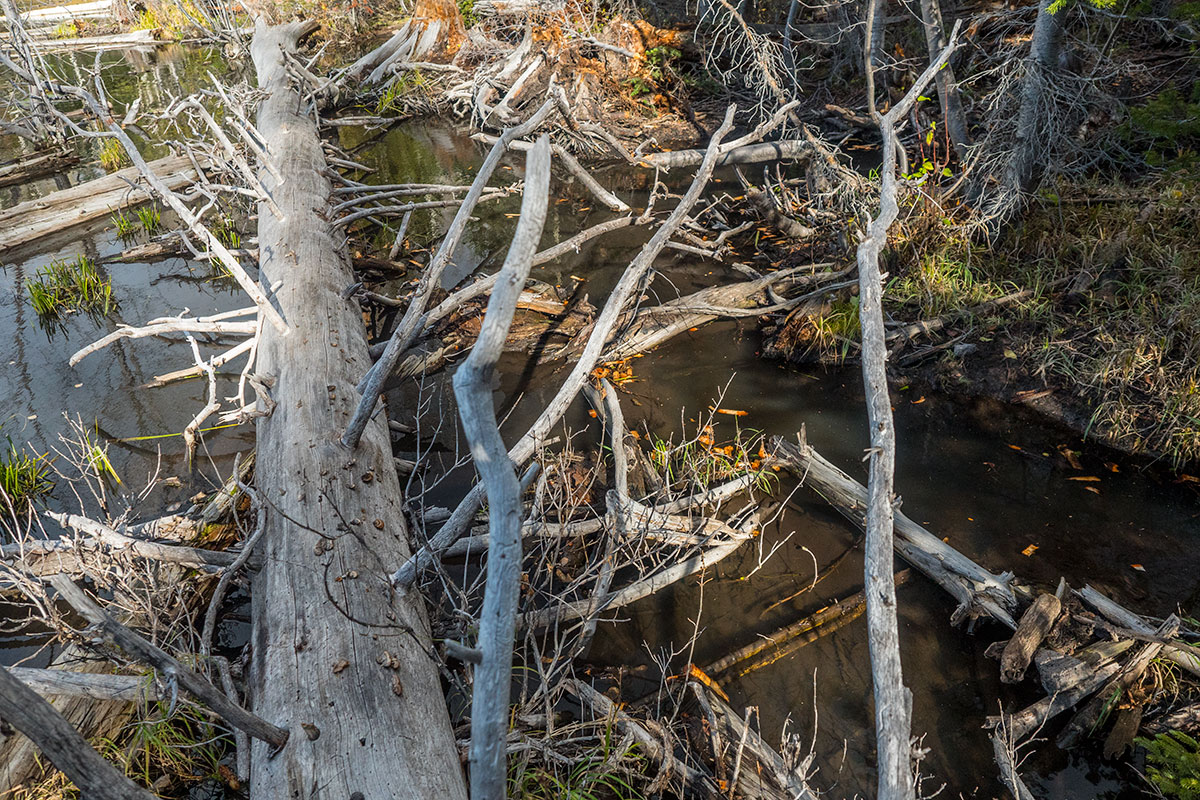 As I continued slowly creeping along the log I plopped my bug down other deep dark lies under fallen logs. Every time I got my bug where I wanted it, I got an abrupt jerk at the end of my line. More often than not I got the visual treat of watching the ambush play out right before my eyes. It was almost too much for me to stomach. I was lucky to be the only one at the lake, otherwise I’d surely have people staring at me with all the angry yells and cussing I let out with each stupid fish. The action was predictable. I knew that every time I found some great looking water some colored up diva would come up and interrupt my fly’s swimming with a savage and violent assault. I even got a little bit on film. This clip is just on the other side of the ‘root ball of sorts’ I mentioned earlier. Between the couple times I fished it I ended up pulling 3 or 4 fish out of the immediate area. The fish were just hiding everywhere! On a side note, it was filming with my camera in one hand and fly rod in the other that finally convinced me to get a GoPro.  I could have gotten a lot of compelling footage to support my case on why brook trout are such horrible creatures.  I’ll surely head back next year in order to obtain this compelling video evidence.

I hope I’ve made it clear exactly why I hate this stupid fish, but just in case it’s still not obvious these photos speak for themselves. Vapid and showy. Freaking brook trout. What a waste of a day!