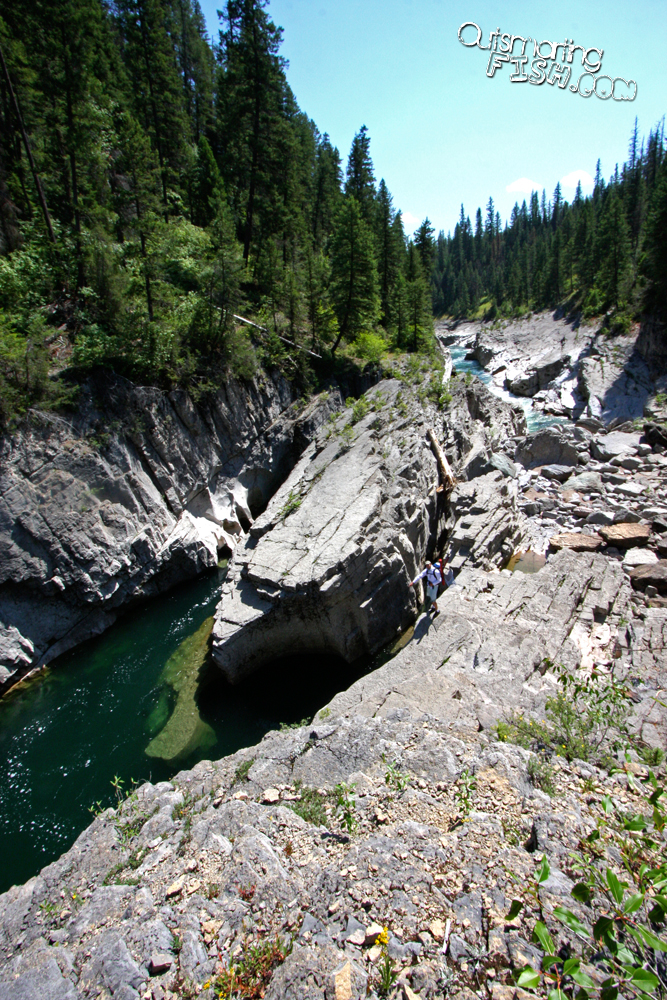 This was the day I had been waiting for. Today we were to hunt bull trout. The trip was already off to a great start, but I could hardly contain my stoke-level that I finally ha a chance to chase these fish. The drive was a long combination of pavement and dirt. Our hike took us in and out of trees, across waters, and over colored pebbles rounded by the glacial-fed river. The surroundings were much like I had imagined, but definitely more. This place was simply incredible. 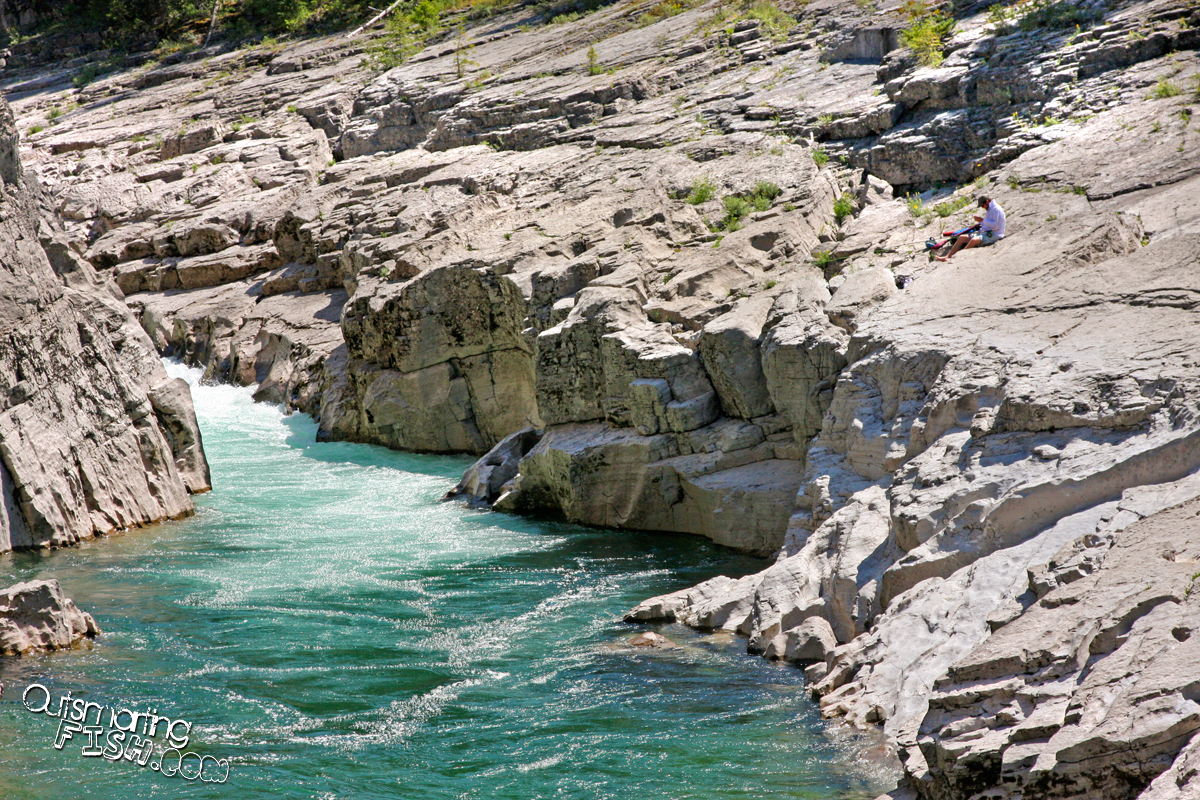 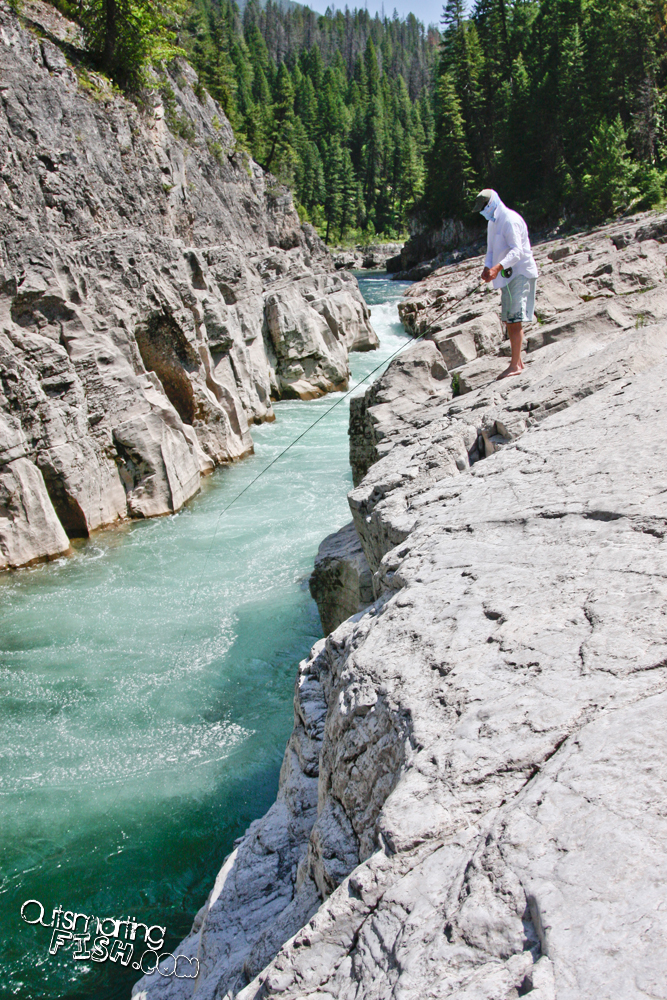 The first bull trout was spotted cruising in some deep slack water. It was so crazy to finally see one – especially under such beautiful circumstances. A fish close to thirty inches lazily cruising calm, crystal clear water in search of food.

We hiked another hundred yards or so upstream to the hole where we would begin to tempt these beasts. The “hole” was one unlike one I’d ever seen before. The river was roughly 40ft wide, about 20-30ft deep, and surrounded by rock. The water passed through a narrower, steeper channel and dumped into a wider, deeper pool. We chucked our meat from atop the small cliffs above the pool. My first fish came seconds after my cast touched down on some calmer water on the far side of the main current.

The take was ridiculous. My streamer slapped the surface and almost immediately the fish appeared from below and destroyed the fly. The fish was lean and it’s crazy to think that lean fish like this can be so gnarly. This was truly a monumental fish for me. Streamer fishing at it’s best! 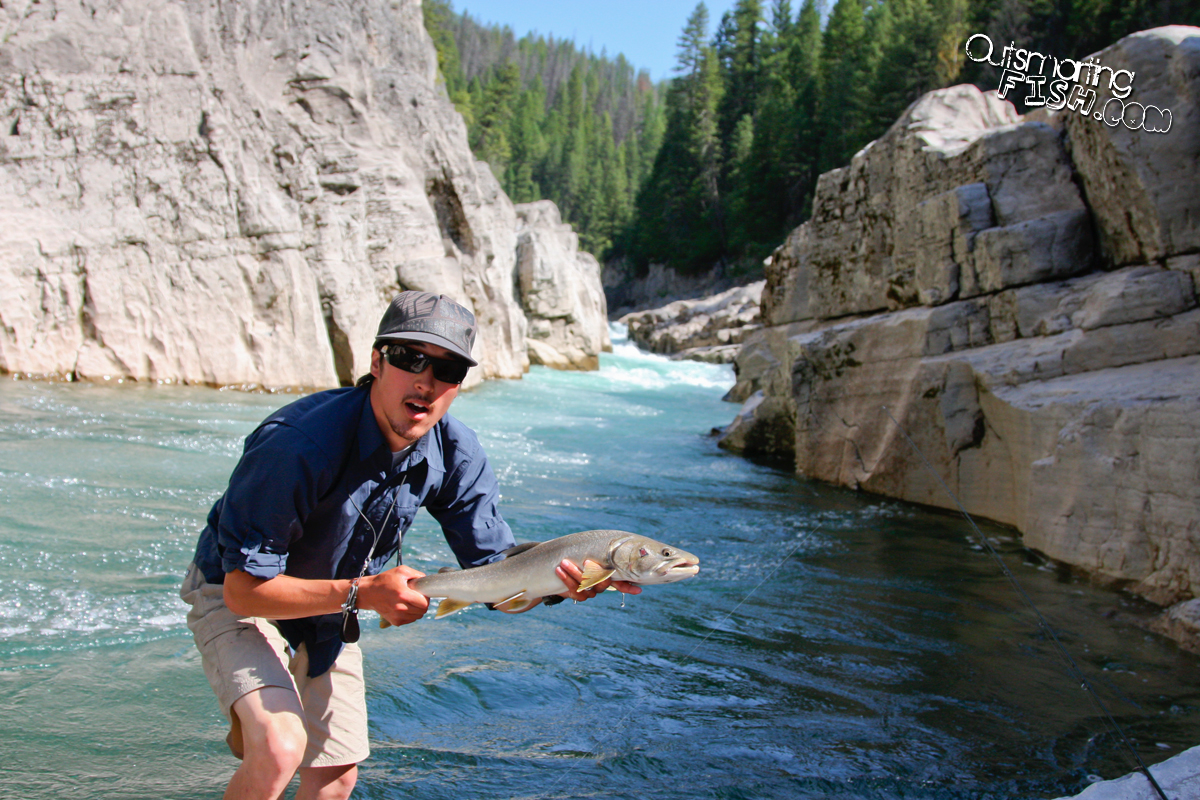 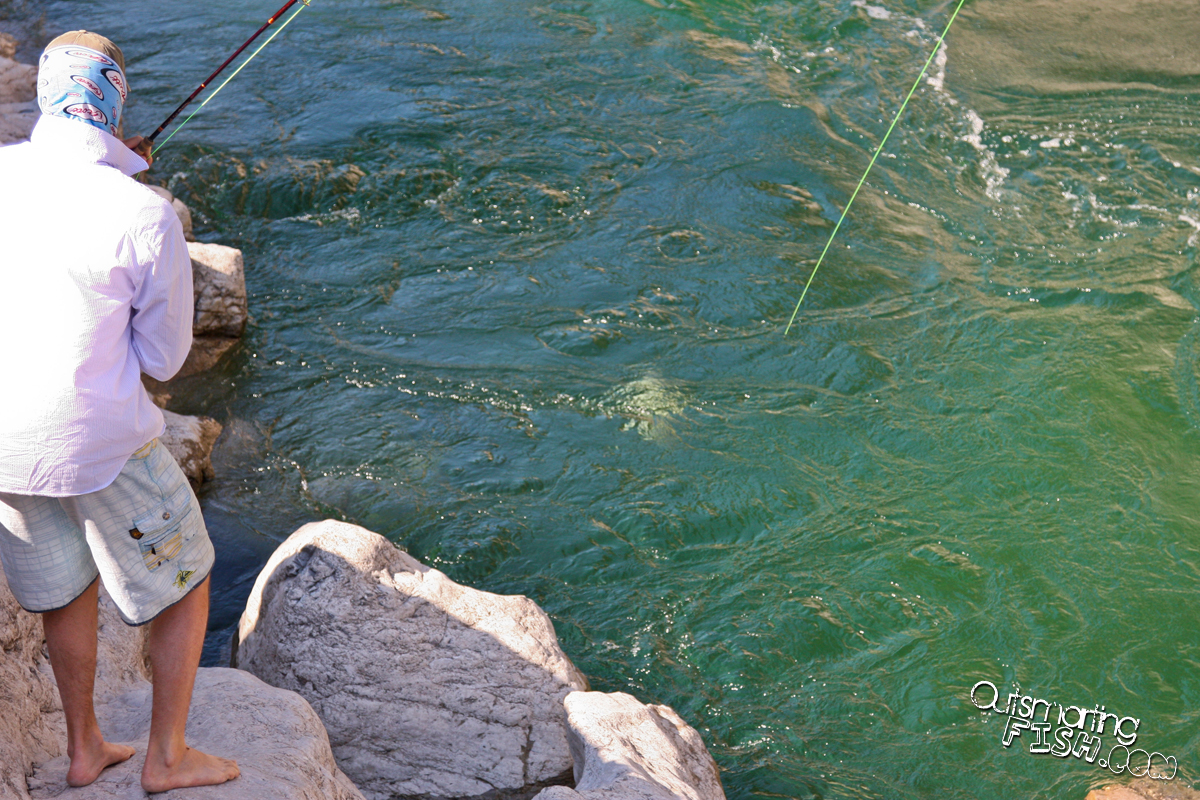 We spent all day running up and down the cliffs. It was really something else hooking fish and having very limited spots to land them, we had to work as a team. In addition to the whitefish and cutties schooling around , it was amazing to catch occasional glances of big bullies riding the current. One highlight was seeing a large bull trout with an 8-inch whitefish in his mouth being chased by another large bull trout. It was incredible to see just how gnarly these fish were.

Later in the day, I once again faced the first fish we spotted when we hiked in in the morning. In my eagerness I had pulled my fly from its mouth too early and I now had another chance. Derek had a fish on and this fish had come back out to investigate. From an elevated position, I tossed my oversized streamer out and stripped it passed him. I’ll never forget how awesome it was to see his huge jaws and the white of his mouth envelope my fly. It was a great way to end yet another awesome day chasing trout.

Fishing for bull trout was just as much fun as I had imagined. Getting the opportunity to do it in some of the most beautiful scenery I’ve ever seen made it that much better. I was stoked that this was only day 2 of our trip. 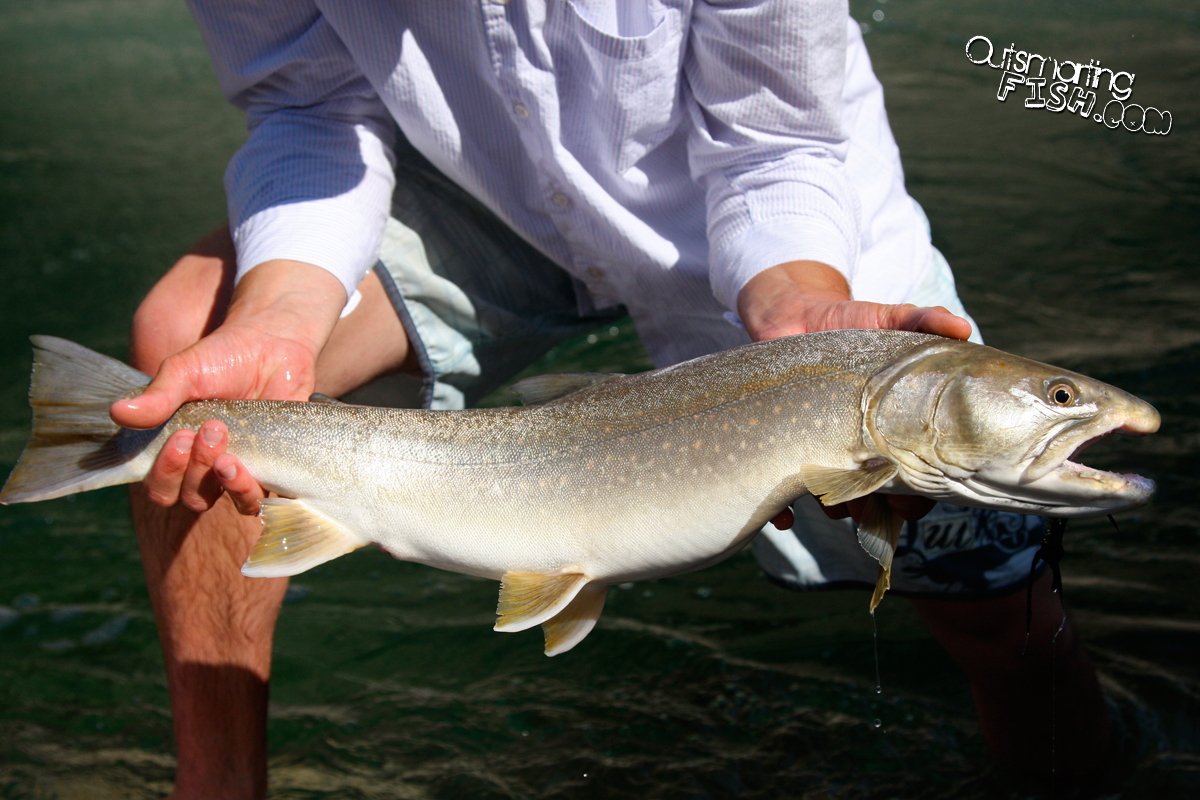 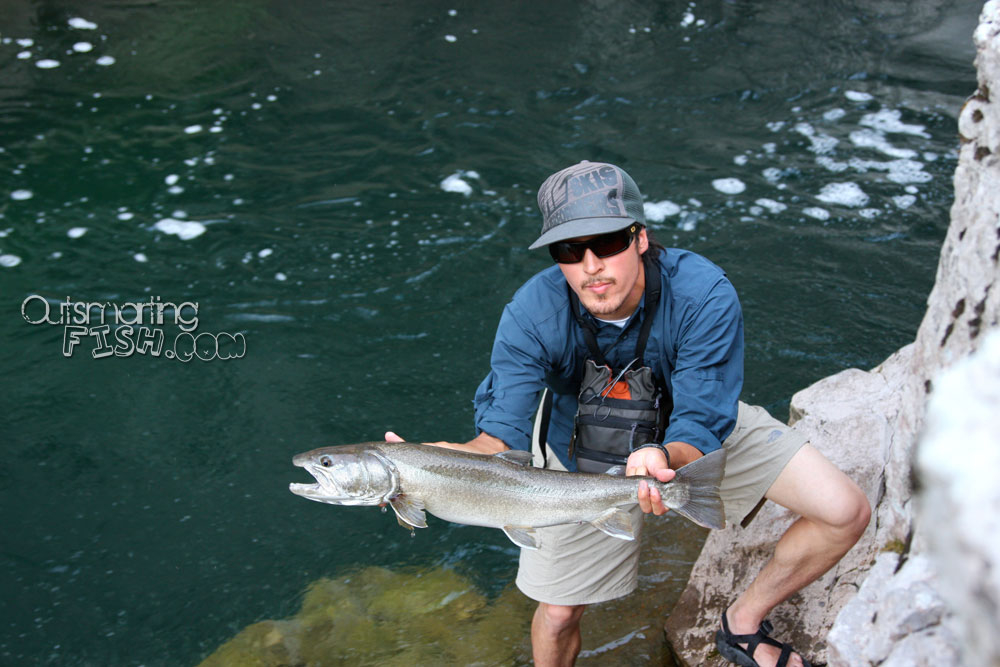