As a young father I’ve already gone on a good number of what we like to call “adventures” with my family.  Out of all of them, this particular trip to the Uinta Mountains undoubtedly goes down as the sketchiest.  I’d like to start by summarizing what I learned from this valuable experience – I’m an idiot.  Each time I think back to this outing I can’t help but feel embarrassed and somewhat ashamed.  I am, however, extremely grateful that things turned out ok and that I learned my lesson early on.

Both my wife and I love going out and enjoying the outdoors. Seeing that she is from California, I try to show her new parts of the state that she hasn’t seen before. I found an area of the Uintas that neither she nor I were too familiar with and after checking out on my topo map as well as Google maps we packed the car up and headed out.  The drive is under two hours and filled with some good views.  On the way we came across a small stream that ran along side the dirt road.  There was  a deep, slow stretch that looked especially promising.  We pulled over for a quick pitstop. It wasn’t long before I had a fish on and was excited to see that it was a little brook trout.  My wife had never seen one in person so I anticipated showing her one of my favorite species of trout. 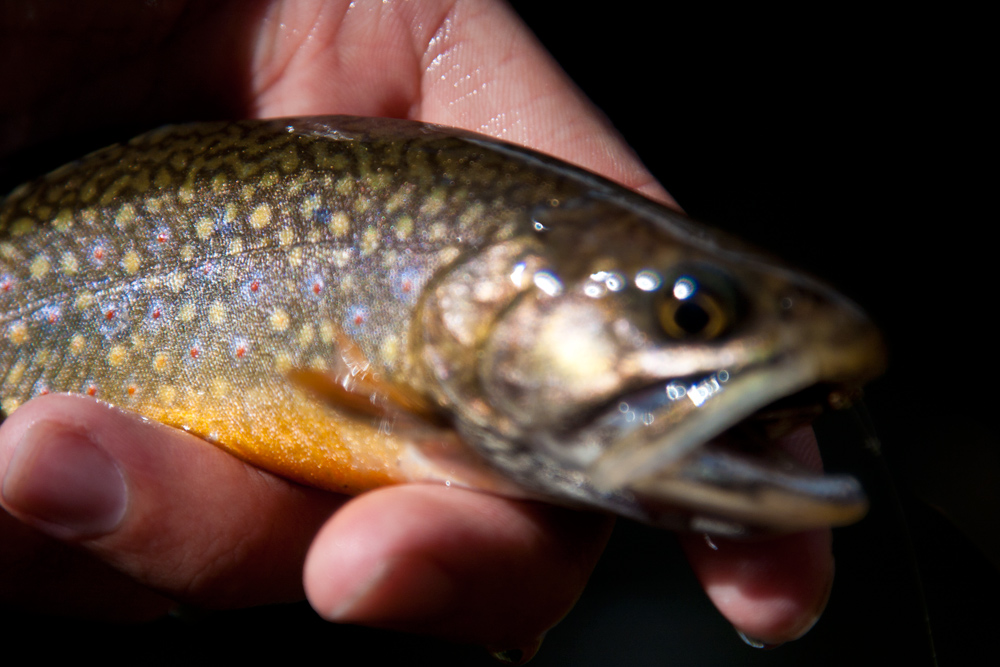 We headed on our way. It was a perfect day for a hike and the area was just as nice as I had expected.  One thing I began to be unsure of was whether there would be any sort of trail to the small lake that was our destination. For me, lakes are perfect destinations when hiking.  Besides the fact that it’s always fun to see what the fishing is like, lakes are a good place to rest, you can skip rocks, and they give you somewhere to go – rather than just walking around. Unsure, we got packed up and headed in search of a trail.  Candice (who was 7 months pregnant at the time – yes she’s a champion) had a small pack with my camera and other stuff, I was wearing a pack with Zev in it, and the Boogie-man had his own little pack with water and some treats.

To put it simply there was no trail.  Not only that there was no dirt.  We began our hike across a large rock/boulder field that ascended to a small bluff.  It seemed that once we got on top of the bluff it would be much easier goings.  I was wrong.  We scrambled along the rock field without too much problem.  I would occasionally have to stop to help Boogie find a better route.  He’s a great climber but sometimes gets intimidated in sketchy terrain.  After descending to get him I found myself quite a ways behind my wife.  Feelings of terror shot through my body as I took a step onto a rock that I assumed was too big to shift by my body weight.  It shifted and I lost balance and began to fall backward.  Terrified of falling and landing on my son, I quickly spun around and fell face first hitting my face on a rock and then tumbling down to the next level.  Dazed, I scrambled as quickly as I could to get to my feet to make sure my boy was alright.  I still thank my lucky stars that he was a little shaken up but ok.  After a moment of soothing words he was ready to continue.  I on the other hand was still shaken up and completely pissed at myself that I had let it happen.  I can only thank quick reflexes and a well designed child carrier that protected my little man. Here’s a view from a cell phone pic. We’re about 2/3’s the way up. 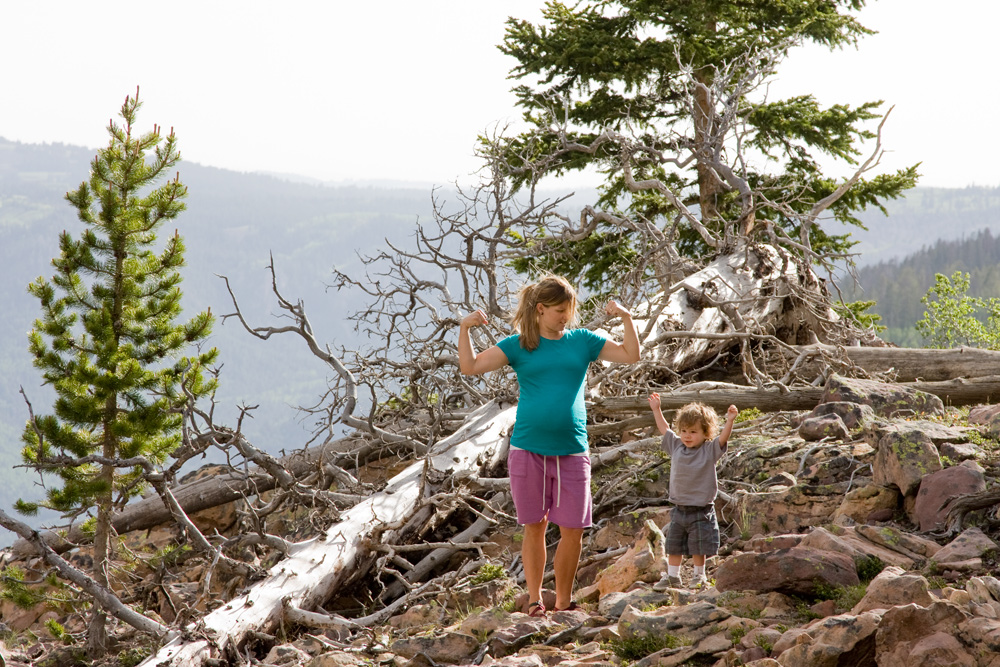 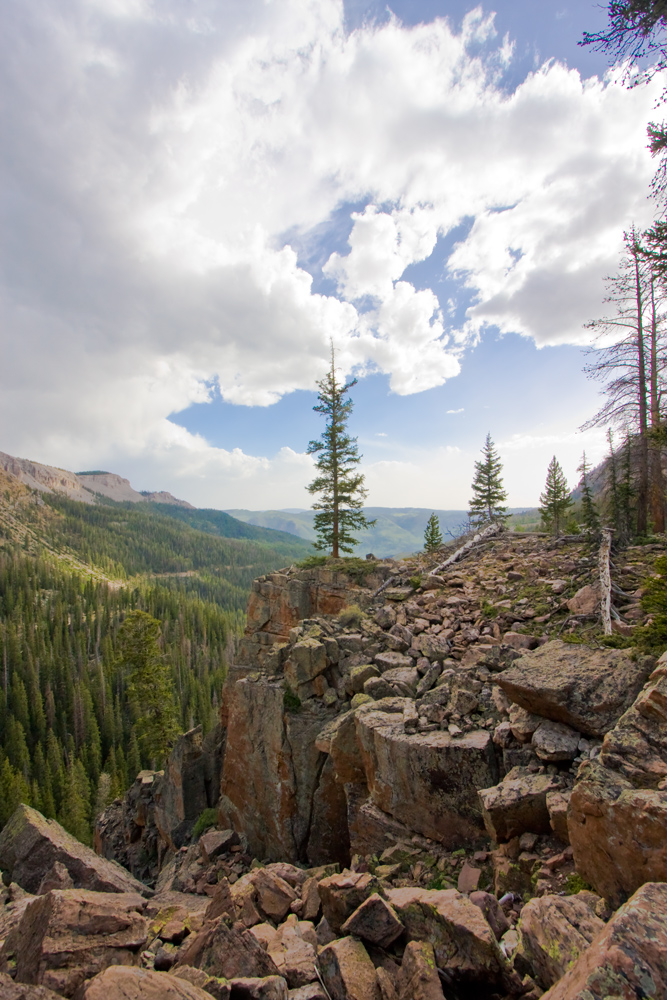 After a bit, I caught up to the lady and filled her in on what happened.  We debated on whether or not to continue and decided that after going through the drive and making it up the bluff it would be a waste heading out now.  We were going to get to this lake if it was the last thing we did.  Big mistake.  It wasn’t long before we found that it was more boulders.  We ended up having to scramble most of the way there.  It sucked.  It turned out to be a pretty cool little lake.  The fish seemed small and in need of food.  I only sight fished to a few and despite their skinny bodies they were actually pretty picky.  I stood atop a 20ft cliff and spotted a fished cruising just beneath the surface over deep water.  I put a cast like fifteen feet in front of him.  He rocketed over to it as soon as it hit the water only to deny it at the last second. 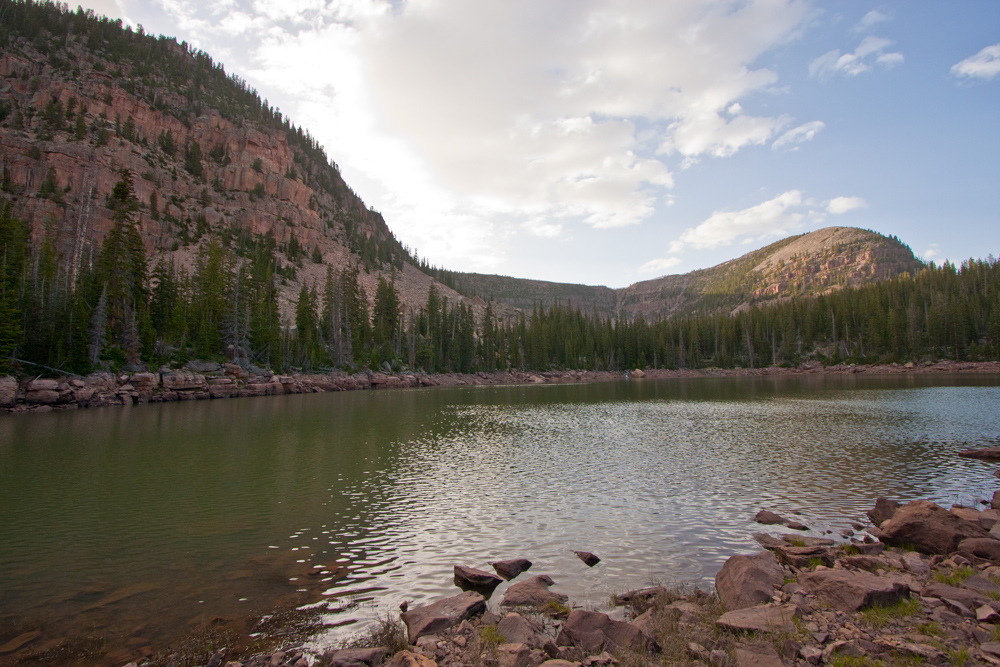 It was getting chilling and we knew we had a horrible hike ahead of us so we didn’t stay long. Not long into our scrambling back did I find that the rather rough terrain had taken a toll on my dogs paws.  The poor guy was having a tough time across the boulders and it made our goings extra slow.  In addition to all the concerns I already had, I now wondered if we had enough daylight to get back at this slow pace.  It was a very rough trek back to where we had ascended the bluff and then beginning the decent from there.  As we finally begun our decent it was beginning to get dark and at that point I knew that we wouldn’t make it back at the rate we were going.  I also knew that it would be a very dangerous decent in the dark.  Boogie was inching his way along and I was assisting him down each step of the way.  It broke my heart as I could only imagine how much his poor paws must have been hurting.  I also knew that it would be a very dangerous decent in the dark – for all of us.  Even with the short stay at the lake, it had taken us hours longer than we had originally planned and we hadn’t come prepared with headlamps.  Although it broke my heart to see my dog in pain, my top priority was obviously my family.  Not only were they tired, but my wife has a prego belly.  Ya, I suck at life!  I decided to leave Boogie to assist my wife down to make sure that she and my boy(s) got down to the car ok.  The sun had long since set when we reached the bottom of the rock field and I was insanely relieved to have my wife and boy back ok.  It was dark but I ran back up to find my dog.  My calls were eventually answered by a nervous bark.  I found him stuck at a tough spot surrounded with higher drops.  Boogie is a 90lbs dog so instead of picking him up I held the handle/strap on the top of his harness and took the weight off his feet as we descended.

We were all worn out on the drive home.  Everyone fell asleep and was left to reflect on the days events.  I usually rely on my wife to keep me in check as far as sketch factor but I realized that it’s my responsibility to be a better judge of the situations I put my family in.  The last thing I want to do is put my family (including pup) in danger.  I was so glad the day was over and I chalked it up as a learning experience I won’t soon forget.