When I heard rumors of a GIANT bow lurking in a local public water, I decided to start my usual “CSI” investigation.  Visiting the water and watching for cruisers on my way home from work became the norm.  However, after many visits, the local She-Monster never showed up to play.  I soon put Nate and Derek on the scene, but they only turned  a decent brown…. No sign of the elusive bow.

Derek decided to come up for for some trout fishing at night with some of the craziest, sweetest, and most innovative big fish streamers ever concocted.  With heavy, kyped-out browns on the mind, we hit up some big water right at dark.  We did some fishing with mice and other night-time snacks but by about midnight we had bumped a few fish, but nothing had stuck.  We finally decided it was time to check out Bowville.  After a short drive, we arrived on site with our confidence renewed.  Derek still had streamers in mind, but I opted for the mouse.  After an hour or so of fruitless casting, we decided to look around a little with a light and see what fish were moving.  We saw a few smaller brownies but nothing to get us too excited.  Another hour passed and we heard a fish take something off the top.  I hoped and half-jokingly told Derek, “That’s probably a hawg eating a mouse….”

We stayed there and fan casted blindly in the darkness with the only sounds being the occasional and eerie “whooooo” of a great horned owl perched in a nearby tree.

Then out of nowhere, it happened…..  The silence broke as a toilet flushed on my mouse… water churned ….SLAP…… STRIP…….. and ……..STICK!!!! YES!!!!  FISH ON!!!!  Derek saw the fish roll out of the corner of his eye just as I strip-set.  The fish went into a tail slapping frenzy.  From the sounds combined with the weight of the fish I half wondered, “Am I fighting a beaver?!”  Derek asked if the fish felt big and I answered the affirmative, “It’s HEAVY!”  After a short, but strong fight, the fish neared.   Setting his rod on the shore, Derek readied his China-sized net (dubbed “the livewell”).  When he finally turned on his light, Derek’s body was blocking my view of the fish.  As it reached Derek, he exclaimed, “SHE’S A PIG!”  One swing and she was in the net.  Derek turned around holding the net with an ENORMOUS tail sticking up out of it, announcing, “She has got to be 15 POUNDS!!!”  Blurry feelings of euphoria, relief, bliss, and happiness billowed from my being as I grasped the base of her massive tail.  I wasn’t even CLOSE to fitting my hand around it!!!  We stood quietly and dumbly admiring the specimen as she gilled calmly in the underwater net. High fives, knucks, and grins were exchanged.   We busted out the tape and measured her at 34” with an 18.5” girth.  There, at 2:35am, we sat in the cool, dark water…

…and both laughed out loud like little kids on Christmas.  A deep respect for such a fish came to mind as did the fitting words……, 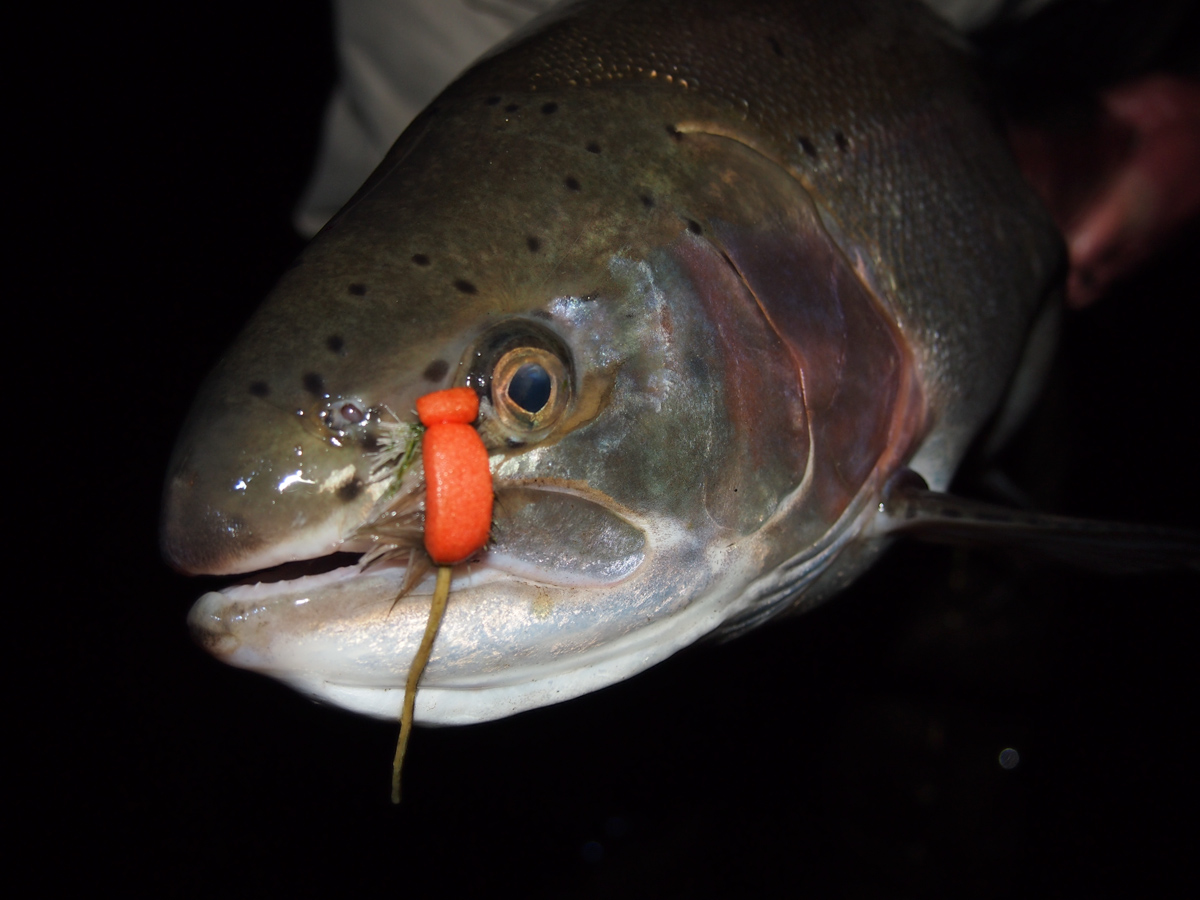 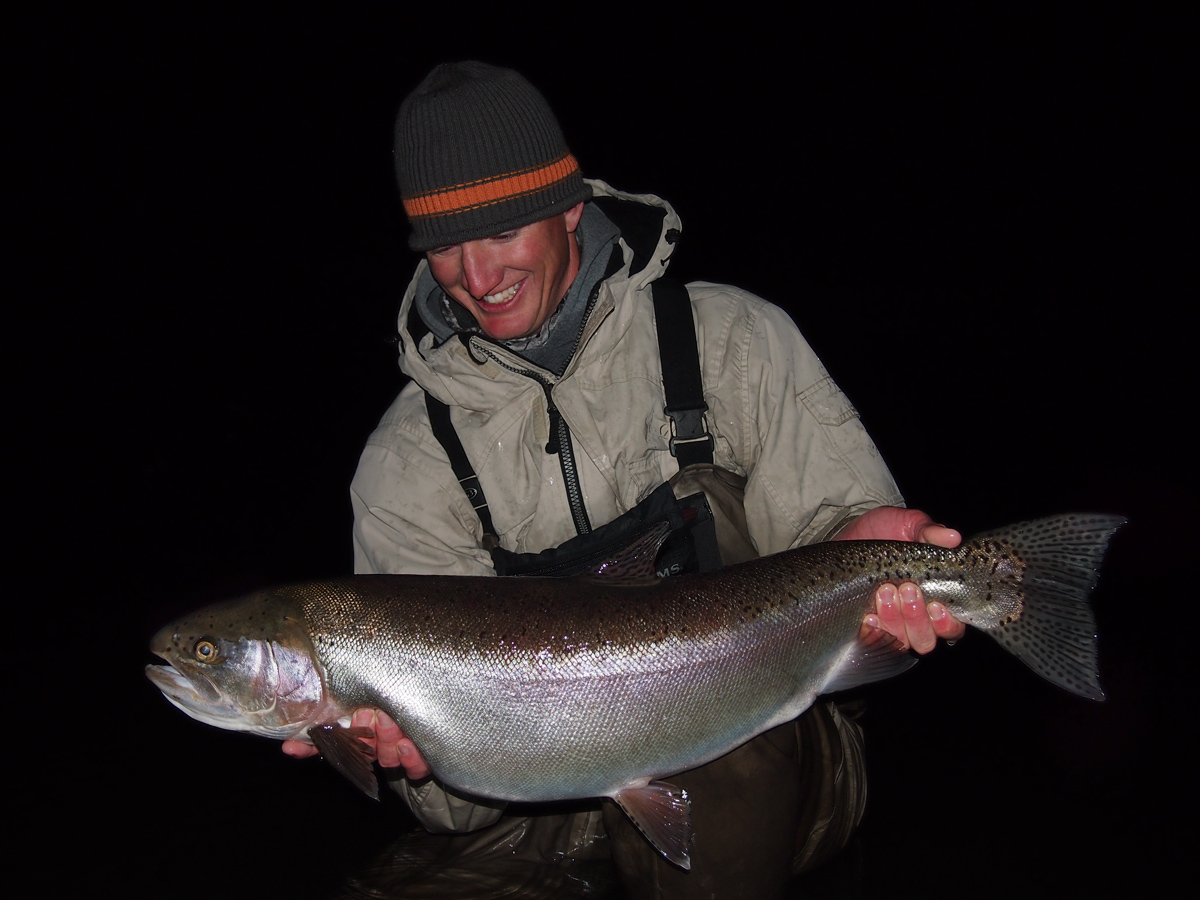 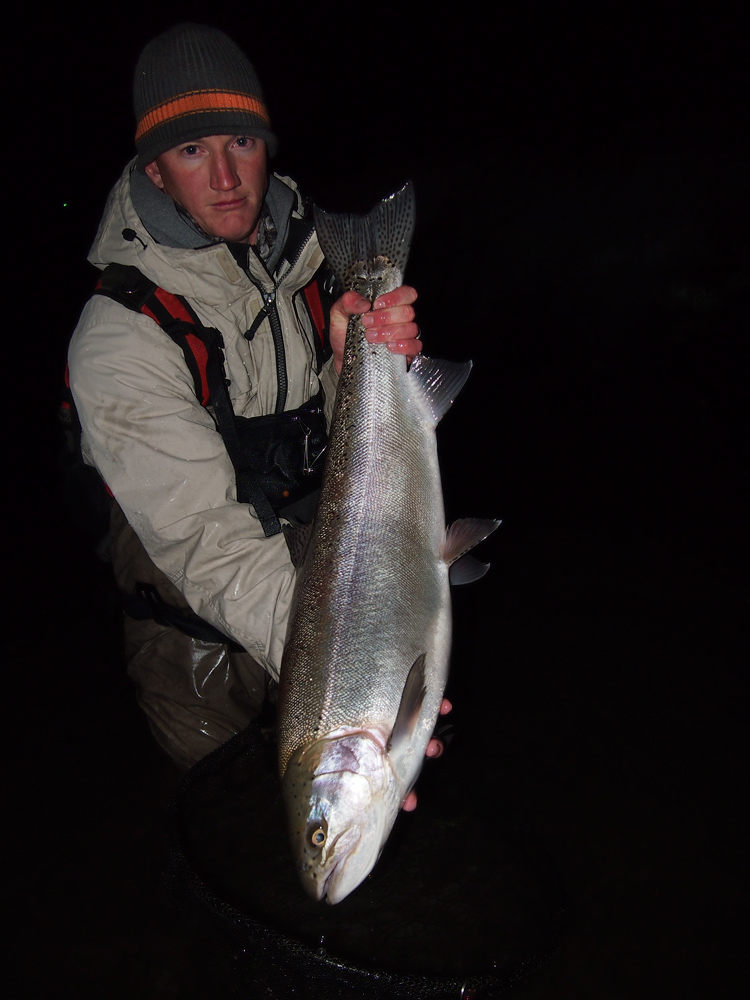