5 hours of driving, 3 hours of sleep, and 12 hours of non-stop fishing. Sound familiar? Yep. Sounds like the makings of a perfect fishing trip if you ask me! Ha. We were stoked. The mission? Three noobs getting after a new species. We forewent fishing for fall browns and brookies and decided to chase some toothy critters instead.  Tiger muskie to be specific. We were all incredibly excited. It was a long time coming and we finally followed through and made it happen.

We made the drive late Friday and on the way we picked up a special delivery from Peggy Williams over at Rainy’s. Our destination was chosen last minute so we had limited flies prepared. We had decided to play it safe and get a few more bugs and figured that Nick Granato’s El Chupacabra was an obvious choice! Big ups to Jesse Riding and his team for exceptional customer service in a pinch! After picking up the late night package we made the short drive to the lake. Upon arrival we wasted no time laying our sleeping pads and bags. It was chilly and late. The view was great and occasional streaks in the sky grabbed my attention making it hard to keep my eyes shut. The thought of casting to tiger muskie in the shallows in a few hours didn’t help either!

My alarm rang as a hint of light teased on the horizon. Soon we were wadering up and lining our rods. A truck pulled in and our buddy, Phil, stepped out and greeted us with a warm handshake. Phil had been kind enough to help us prepare for this adventure. We exchanged battle plans and he headed one way and we another.

Things started off slow. I walked the bank without seeing any jungle cats. There were plenty of fish porpoising nonsensically in open water but none in shallow ready to play. I finally found one chillin’ but let’s just say I suck at life. We were all spread out stalking different stretches of bank line keeping each other updated with occasional phone calls. We were starting to get some attention and it wasn’t long until Phil called with a good fish on the line. I continued walking solo not seeing many fish at all. I blind casted in some good looking small bays and and as I was stalking a particularly sexy bank line and I was surprised when my rod came separated mid-cast. I went to reconnect and to my dismay I found that it had, in fact, broken. Huh? Not sure how it happened but I wasn’t stoked. I made the long trek back to my car seeing a few fish along the way. Fishing this place reminded me so much of fishing another spot where we also stalk the banks looking for another species of tiger. Luckily, Derek had a really stiff 6wt that casted my 8wt line like magic. Fisherman are always prepared, right?

I had re-rigged and worked a new stretch. I was starting to see a lot more fish and had mixed results. I was stalking a fish and finally got some real attention with a mega slow retrieve. Just then Derek called with some beta. He’d been seeing a ton of fish and thought he had finally figured them out. It confirmed what I had just witnessed and I eagerly got back to it as Grant came a 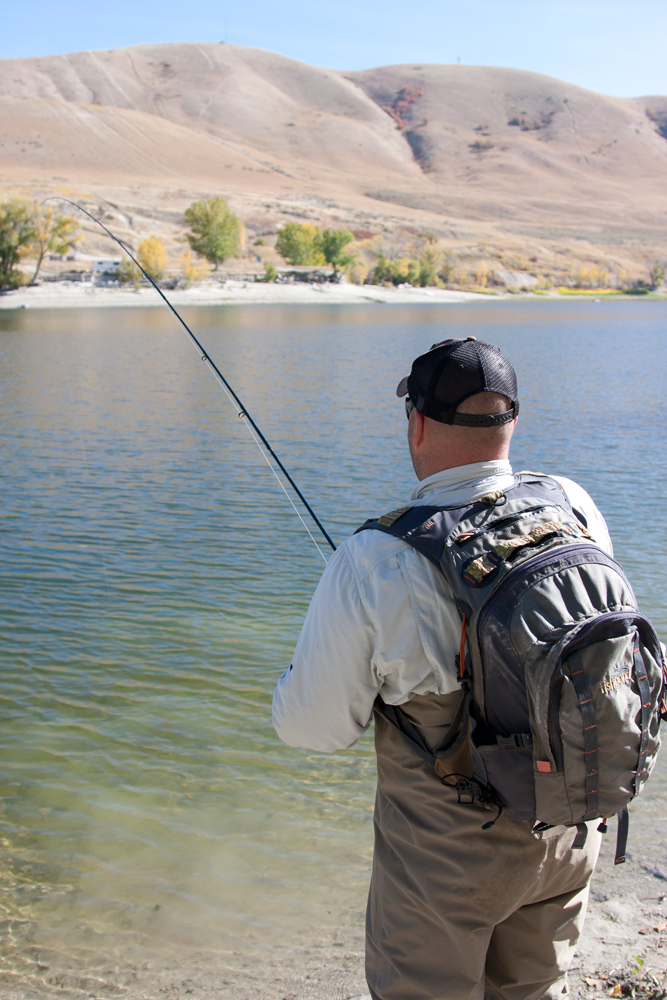 hollering that he had his second fish on the line. I trucked it clear over to the small bay where he had the fish chillin’ ready to be landed. However, about fifty feet from where he was at there was a small muskie (28-inches or so) hanging out in about two feet of water not far from the bank. I stopped and lured him in and couldn’t believe my eyes when he slowly approached the sandy bank  and finally ate literally a few inches from the waters edge…only he only got the back half of the 8-inch fly in his mouth. Like the giddy noob that I was I set the hook and spooked him. Cracked me up. We laughed and I went to get help Grant capture a pic or two of his fish since he was nowhere to be seen when he landed his first tiger muskie ever. The fish had rested plenty and after my 1/4 mile run he ended up taking off before we could get a shot of him. Figures. After I packed up and headed for some fresh bank I saw the little fetcher swimming like an alligator with his head out of water for about a minute. These fish are so ridiculous.

I got to some good bank and was in the middle of casting to a fish when I got a call from Derek. “I’m on!” He was locked into his first fish of the day. Great, I had just came back from a journey to Grant’s fish and now I found myself tromping down to find Derek. Out of breath, I found him with the striped meat-eater captive in his jumbo net. We snapped a few pics and he was on his way. 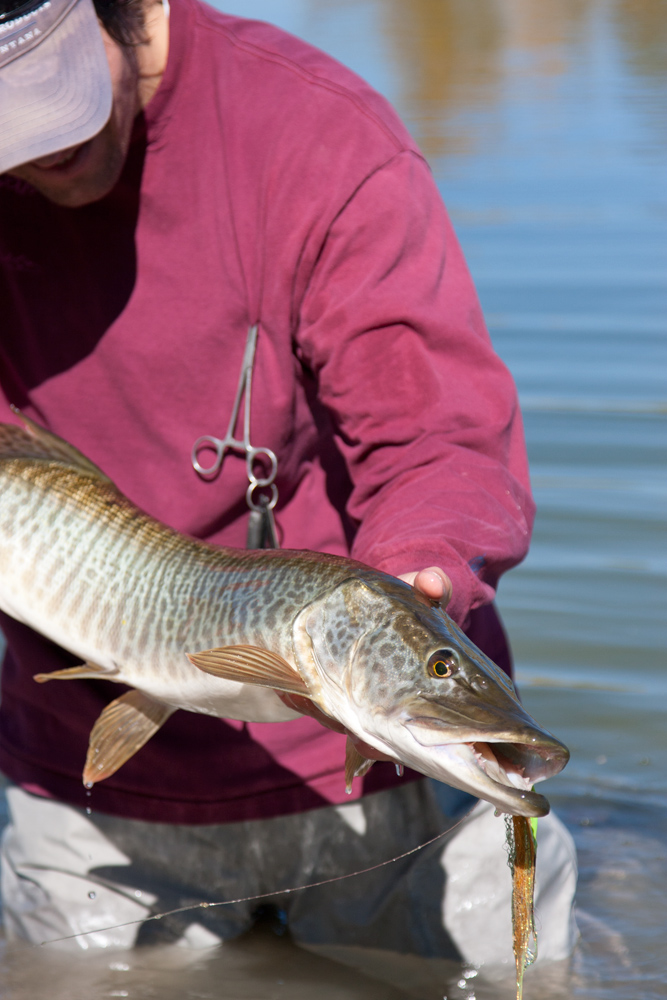 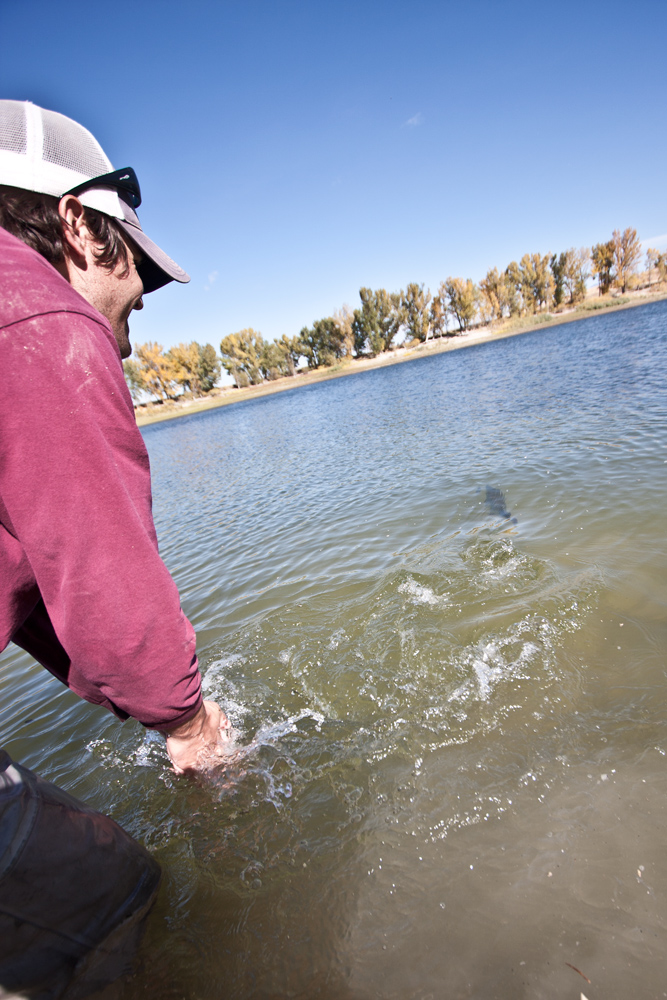 Together we stalked the banks and had plenty of good follows but no takers. Those fish certainly get your heart beating when they slash around at your stuff. The heart got an extra workout later on when we spotted a couple back to back straight carnivores from atop an elevated bank! We got some major excitement out of one but the other disappeared into the deep. The wind began to pick up and we continued to blind fish. Doing so resulted in in my first solid hookup, but it only lasted a brief moment and left me wanting more. We continued casting and stripping blindly in some good water but with no results.

Slowly we headed for a spot that we thought might be shielded from the wind. On the way we stopped to find Grant napping in the car. Together we went to scout the water we hoped would be calm. It wasn’t. Derek has a deep-rooted obsession with sight fishing so when this stretch of bank was a bust he drove with Grant to try one other spot while I persisted at trying my luck. It wasn’t long before I got a call saying that the wind had muddied up the waters and that they were headed back my way. As they passed me they mocked me as I got hung up on a rock right off the bank and continued driving. As a took a step closer to get in position to free my fly I immediately realized that I had nearly interrupted the focus of a very determined fish. He held steady not more than a foot away from where my fly was snagged on the flat side of a rock. I gave a couple tugs and the fly came loose. With the three of us suspended I gave the fly one quick dance before the predator decided to engulf my fly. Astonished, I pulled straight up and the fish took off putting a spin to my Allen Alpha 2 reel. I looked over my shoulder and hollered off to Grant and Derek that I was hooked up. They were baffled. Only a moment earlier I was tight – but on a rock. And now I was into what was to be my first muskie on the fly ever. So stoked. I couldn’t believe the take and giggled like a little kid. The boys came down and helped me with the net. We grabbed a few shots and, stoked out of my mind, I sent the powerful fish on its way. 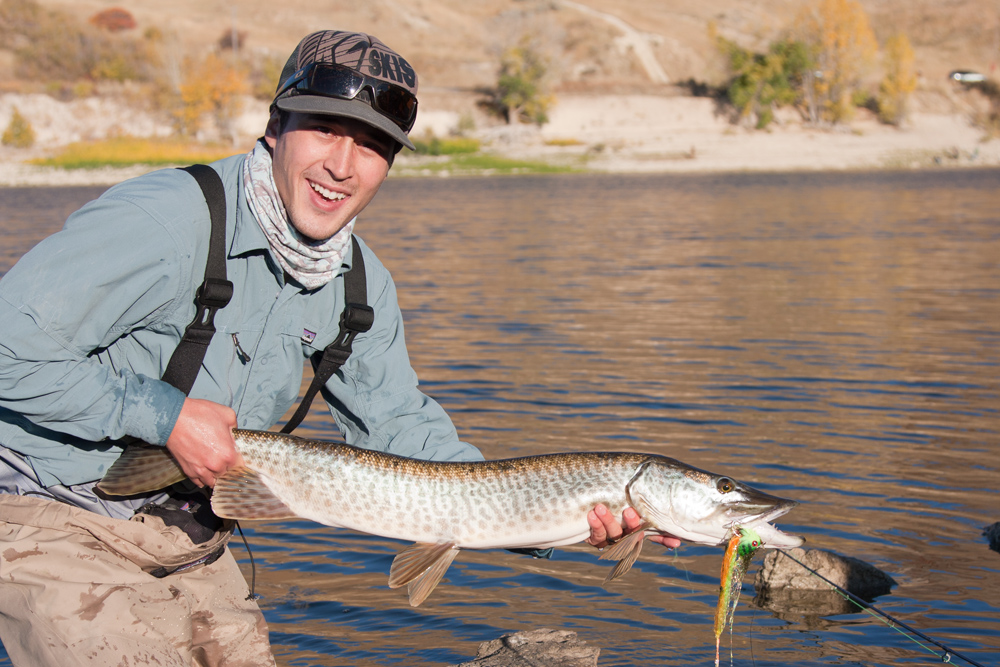 I retied and began casting again as we laughed and jabbed about the events of the day. Only a few casts later, my slow retrieve abruptly went tight.  This one felt a bit better and it  me around like a champ. Clearly the game was on. The fish muscled me around and we soon had another decent tiger musky to hand. This time a little thicker. The boys were fed up with the show and ran to grab their rods and we were able to entice a few more to hand before calling it a day. The sun was setting and we concluded a long day of some incredibly fun fishing. We were all going home having caught fish. We were more than jazzed to have finally come to chase these unique fish and even have the opportunity to each get a few to hand. Not only that, it was a real treat to actually see Grant fish a streamer too. Didn’t think he had it in him! Just kidding, he caught all his fish on the bung.