It was supposed to be a quick trip, in and out. We figured the lake would be primed and ready to go with the recent cold weather snap, hoping the brook trout would be cruising the shallows before spawning.  The drive was long enough to give you ample time to formulate a game plan and make you ready to burst out the door to scramble up to the lake by the time you parked. It was also close enough to do on a limited time budget, with rumors of decent fish floating around we thought it perfect.

Things started off well with little traffic on the paved roads, as turned off onto the gravel we were more than excited to start our approach.  It was getting close now when… disaster struck. Without going into detail, our car was done and we were left in a dilemma a few miles from our destination somewhat near thousand lake mountain. Stuck in the middle of nowhere not far from our destination but without a functional vehicle.  We thought about our options: we could say “forget it” and go ahead anyway and fish then try to fix the car in the evening; or even spend the night and get to it in the morning; or be responsible and deal with it now.  It should be said the urge to fish almost got the best of me, but Chris had to be back in a timely manner so we opted for the sensible route.

We walked back down the road until we found a someone willing to stop and take us into town. We figured out a way to fix the car – at least well enough to get us going and back home. The next few hours were spent putting the plan in action and around 5pm we were moving again.  Seeing we left the house at 7 in the morning we should have been fishing along time ago, but we made the most of our time and decided we would hike in as fast as possible and fish as hard as we could until dark then head out.  We trucked in as fast as our legs could go and reached the lake sweating like mad men.  It was clear most people had long since deserted the high country, only those willing to face cold, bad weather remained and it was cold indeed!!!  We rigged up and started with the usual: leeches and streamers.  After casting to cruising fish without much reaction we decided the best bet was to fish to the risers eating the large october caddis fluttering clumsily on the surface.  Without fail every time a caddis natural appeared on top they would disappear in a violent swirl.  We started casting dries to the cruisers and…nothing happened.

Next I thought, “ok, brookies love dark colors” so a dark colored nymph might do the trick.  I threw on a purple nymph and started a retrieve at a moderate speed, my fly had hardly started to move when it got slammed but the fish popped off, shoot!  Not more than 10 feet further in the retrieve I was back on, and this one stayed on.  After a good fight I released a healthy brookie and started casting again, it was on!  Almost every cast brought at least a hit.  In the hour or so left of light we landed over 15 fish with several others coming unbuttoned.  There was nothing to0 big coming to hand but the action was consistent so we stuck to our guns.  I decided to put an indicator on and throw into an area I had seen some bigger fish circling.  It wasn’t long until the indicator dipped under the surface and I was tight on a bigger fish.  It was without a doubt the biggest brookie of the trip and one of the best looking males I have ever caught. I’ve put in a lot of effort and had a lot of luck over the years and seen some great brookies but this fish was colored up, thick as a linebacker and had a monster kype.  We snapped a few quick pictures and hurried to get him back in the water.  I didn’t measure him but he was a big brook trout – especially for the area.  We had come expecting smash and grab style fishing for a few decent fish, it didn’t happen that way, it turned out better.  Sure, car trouble is never fun but it made for an adventure and the fishing was far better than we hoped.  All and all it was a day I will never forget! 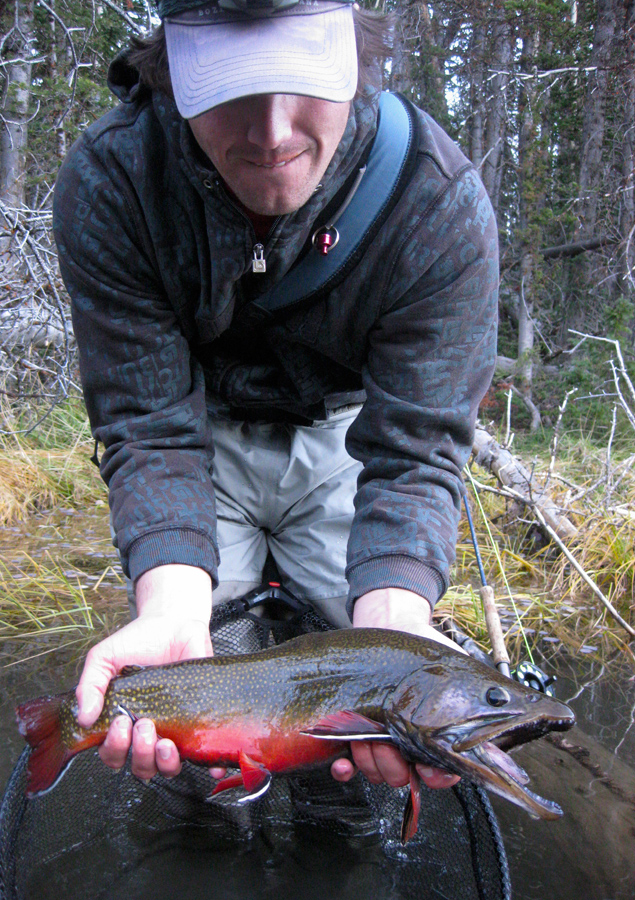