Blitz trip. Again. I think this was the gnarliest one we’ve taken this year so far, but you gotta pay your dues right? Sometimes it pays off and sometimes it doesn’t. We had a little of both but without a doubt dues were paid and not refunded. We arrived at 3am prepped and ready once again to hunt beasts in the dark. It didn’t work. The beasts said, “kiss my butt.” like they do when they don’t like you. I had one hit and other than that we got dealt. The light in the sky came early and we switched tactics hoping we’d have better luck in the light. Stillwater fishing is often unpredictable. 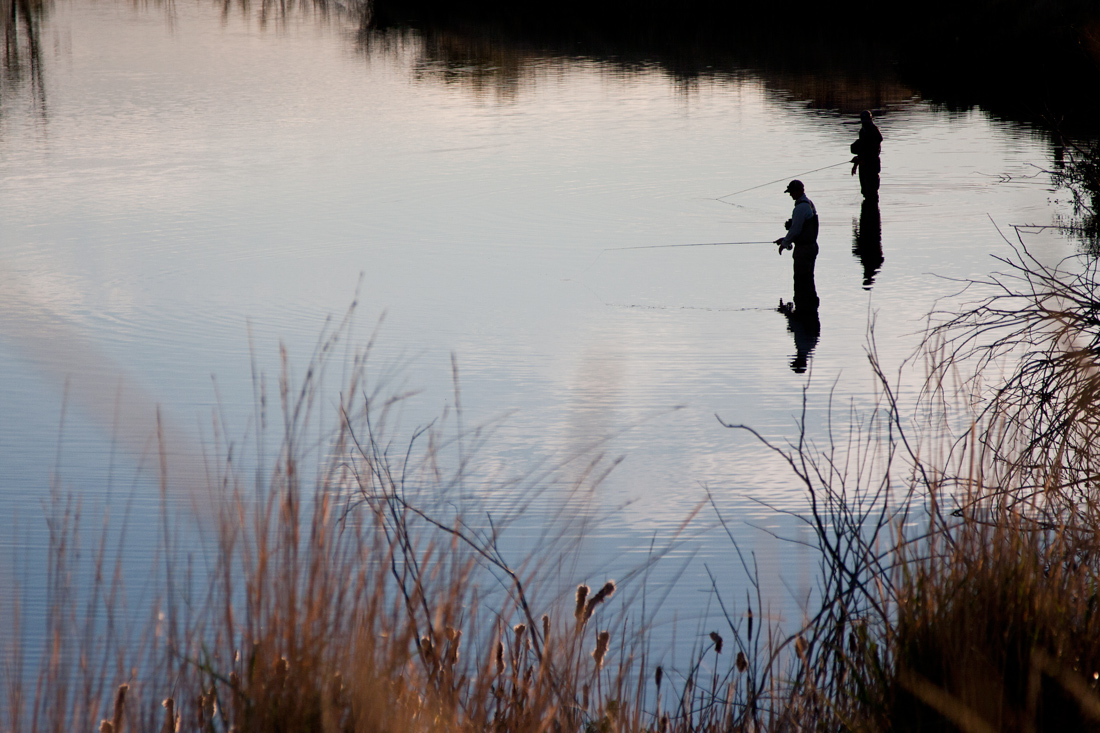 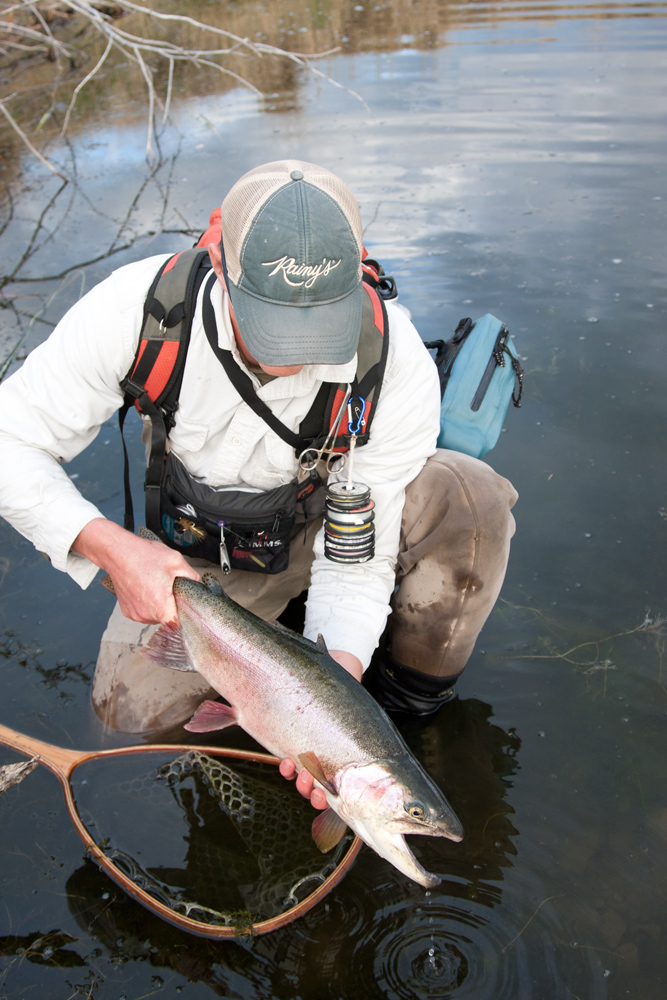 Phil was the first to hook up as he spotted a male rainbow that was cruising the weeds. Rather than run down the hill he was spotting from, he rifled a cast and got an eat. I knew this when I heard the age-old “fish on!” and looked to see him halfway up a hillside. What the freak?

The fish made us WORK today. I swear we were fishing no mans land. No signs and no takers. We posted up and blind fished, walked the banks solo each in search of fish, but all came up with nada. That’s one thing about stillwater fishing that I love/hate – when it’s off it’s off. After regrouping we walked the banks and discussed a battle plan. While 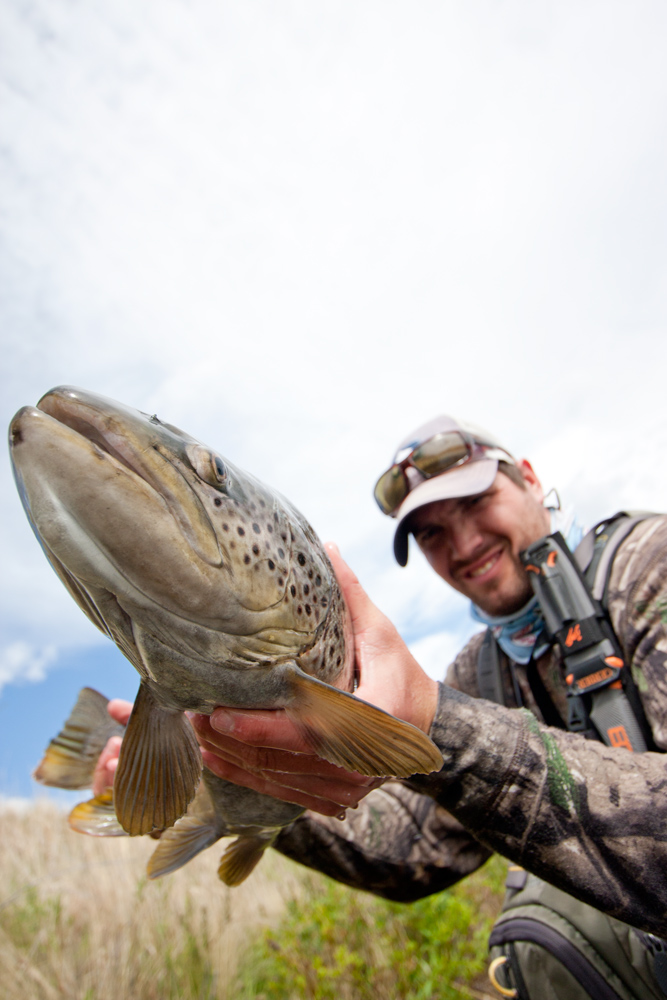 walking along a hillside above the banks Derek spotted a long, dark shape just chillin’ in the shallows, “Is that a fish or a log?” “Dude, totally a fish. You spotted it, you fish it.” As he snuck his way down the hillside Phil approached and said, “Don’t bother with that guy. I fished to him for like 15 minutes earlier and he wouldn’t move!”  Derek owns this type of clutch situation. It’s stupid actually. I tend to get all giddy in situations like this and cast like a homer  but Derek just seems to do work and pull through. We watched eagerly wondering what was about to happen. Phil had his DSLR ready to shoot video but we didn’t even think about capturing his attempt on film. This fish was posted up maybe 6 feet off the bank in like two feet of water. Derek got into place and began to whisper. It took roughly 30 seconds and D set the hook. One head shake and he was in the bushes. A weird thing happened though, the fish didn’t seem to know what happened. After a brief moment, she posted right back up. Derek worked on getting his bug free from the trees and we talked him in to giving it another go – even though we knew that fish don’t eat twice after head shaking it loose. Guess again. It took a little more coaxing but that fish moved and munch that bug again. Doesn’t make sense. To our surprise it ended up being a respectable brown trout.


We got beat up for awhile and I decided to lay in the dirt and take a nap for a sec. It was only like 11am and we’d already been fishing for 8 hours – I was gonna need a sec if I was going to make it all day. Derek’s kick to my side woke me up quicker than I wanted – I guess 45 minutes will do. It was sunny and we proceeded to try and spot fish in the clear spring waters between wind gusts. A lot of people find stillwater fishing boring but the thing that I like is that attacking them from the banks you can definitely blind fish but there are often great opportunities to stalk cruising fish. I spent about a half an hour trying to bad the erratic cruising patterns of a speeding fish, the wind, and a ton of crap in the way to get hung up on. Ultimately I didn’t have the patience it took to go any longer but it’s always hard for me to pull away from a sight fishing opportunity.

Eventually, Grant come out to join us and ended up getting one on the bung while hanging out on his bung. Nice hen rainbow too. We continued to work different spots but didn’t see any more love until some time later when Phil picked up a (relatively) short and chubby hen as a storm began to roll in. This fish had tail-feathers that resembled the fish Derek saw at the bottom of the earth. Pretty cool. 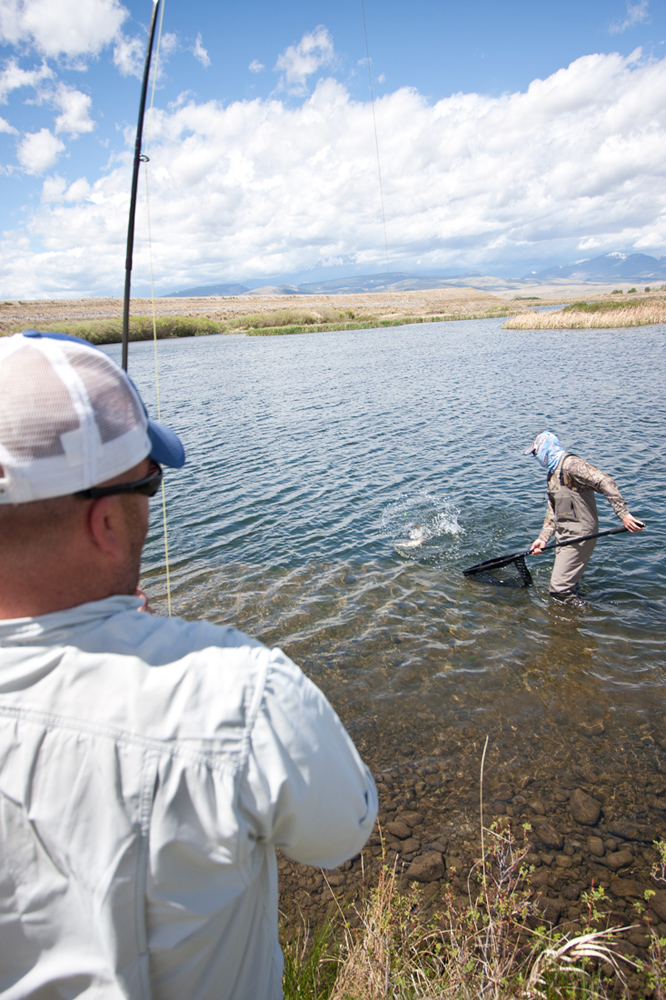 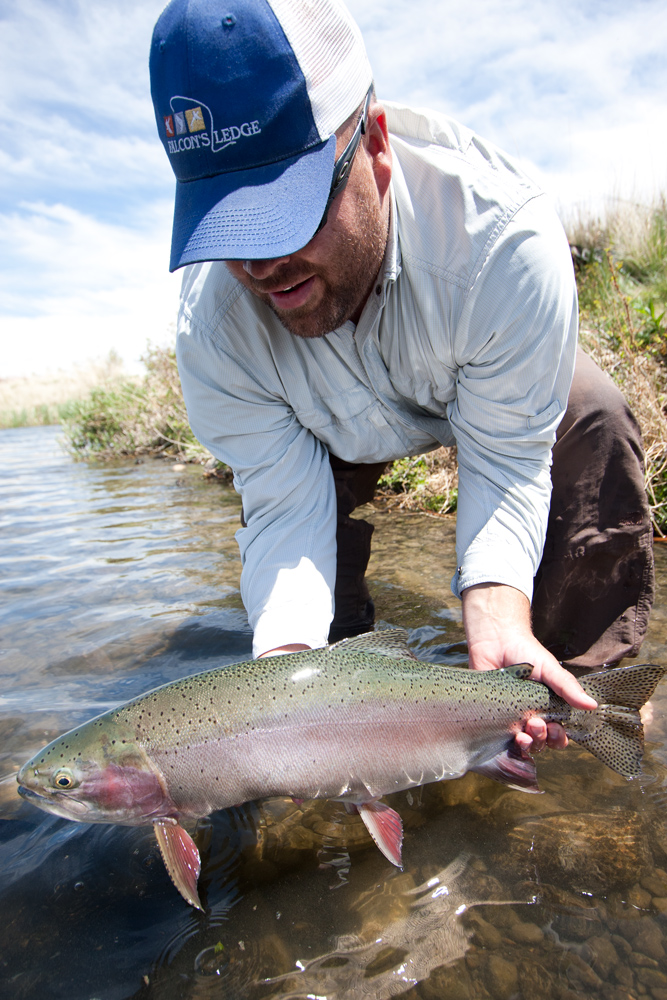 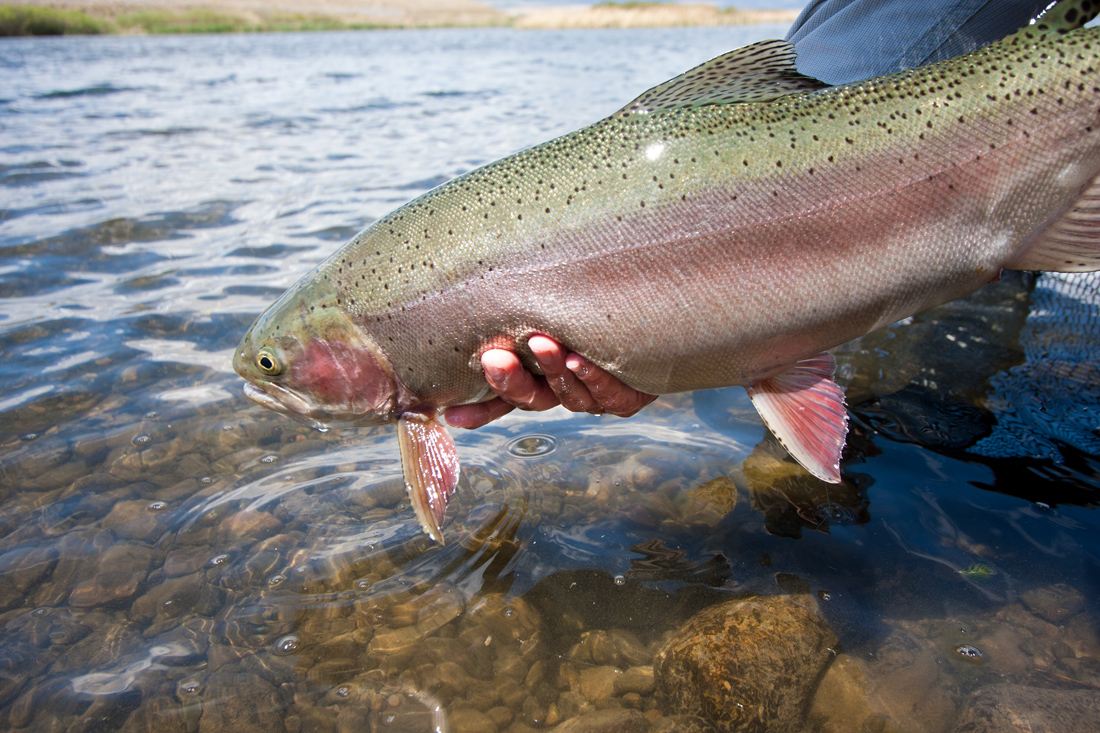 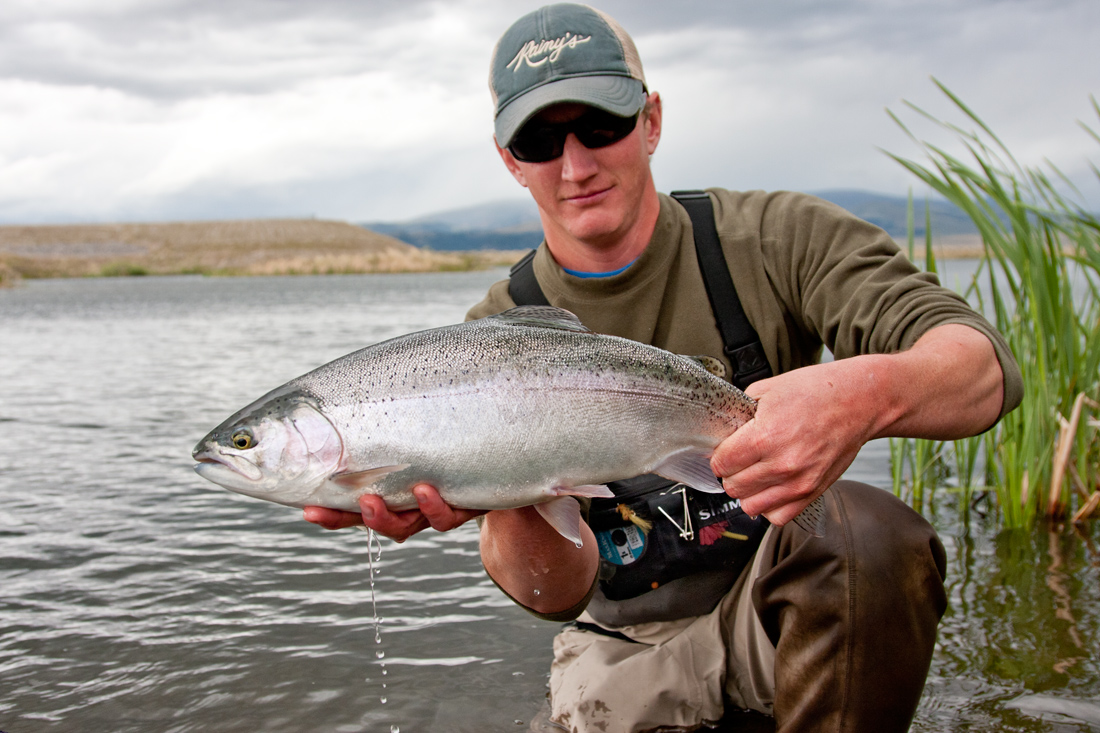 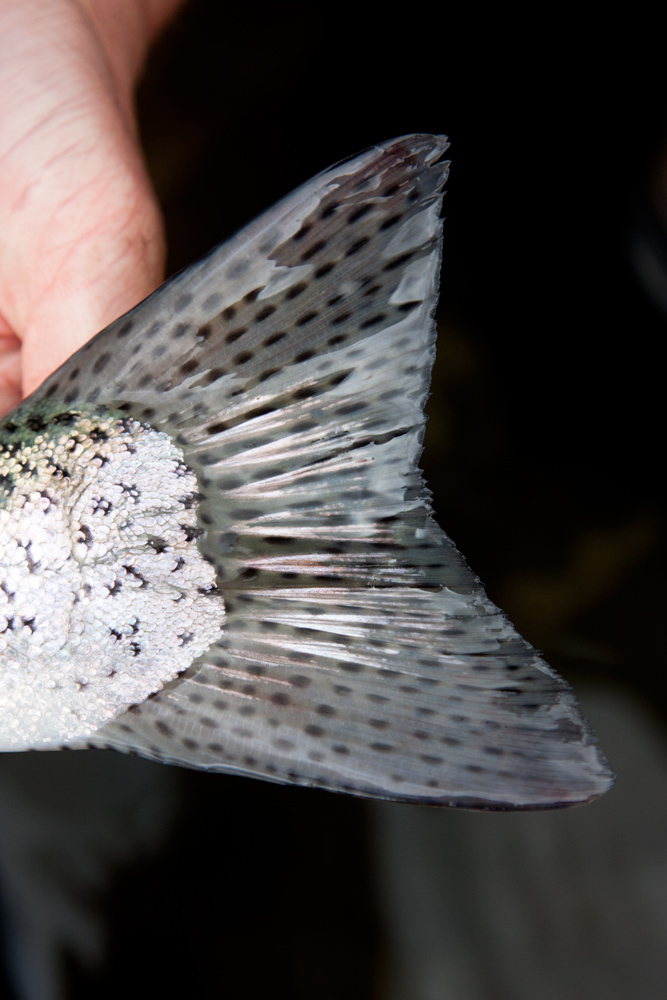 I’ve seen some crazy storms in my day but this was absolutely freaking nuts. It started with some oh-sweet-this-is-good-chop-to-drift-stuff-under-an-indicator-type wind but quickly 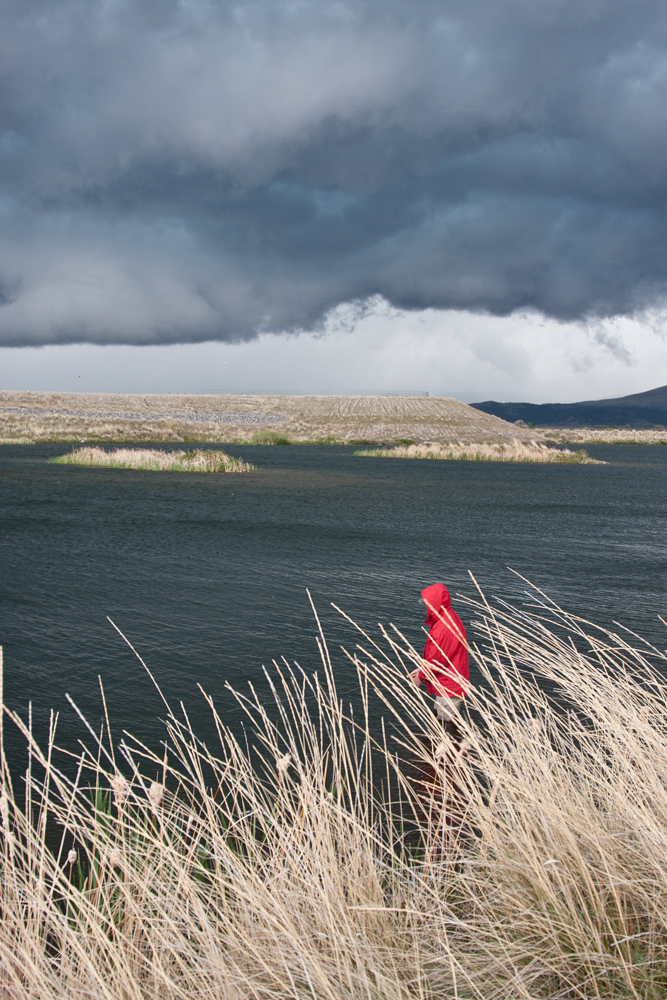 turned into I’m-gonna-fly-my-fly-like-a-kite-and-land-it-in-the-water-to-cast kind of wind. The wind was accompanied by some impressive clouds. Then it came. The rain and the hail. It was INSANE. Derek body-shielded me from the rain and I gambled a few quick shots. The crazy thing is that it got three or four times harder than what you see in the pics. The water was pure white from all the impact. It was even more intense than any of typhoons I endured on my bicycle as an Mormon missionary in Taiwan.  At first we kept fishing just laughing out loud. It only took a minute before we could do nothing but stand there in awe. Eventually we headed for cover to take a much needed break. 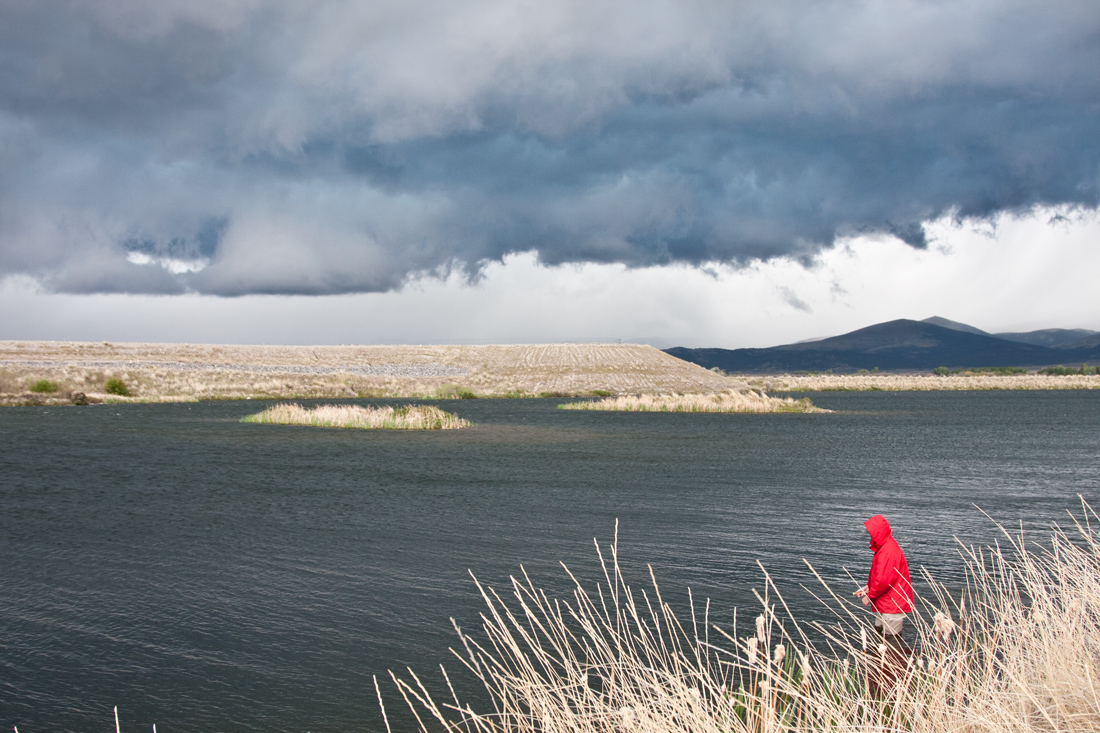 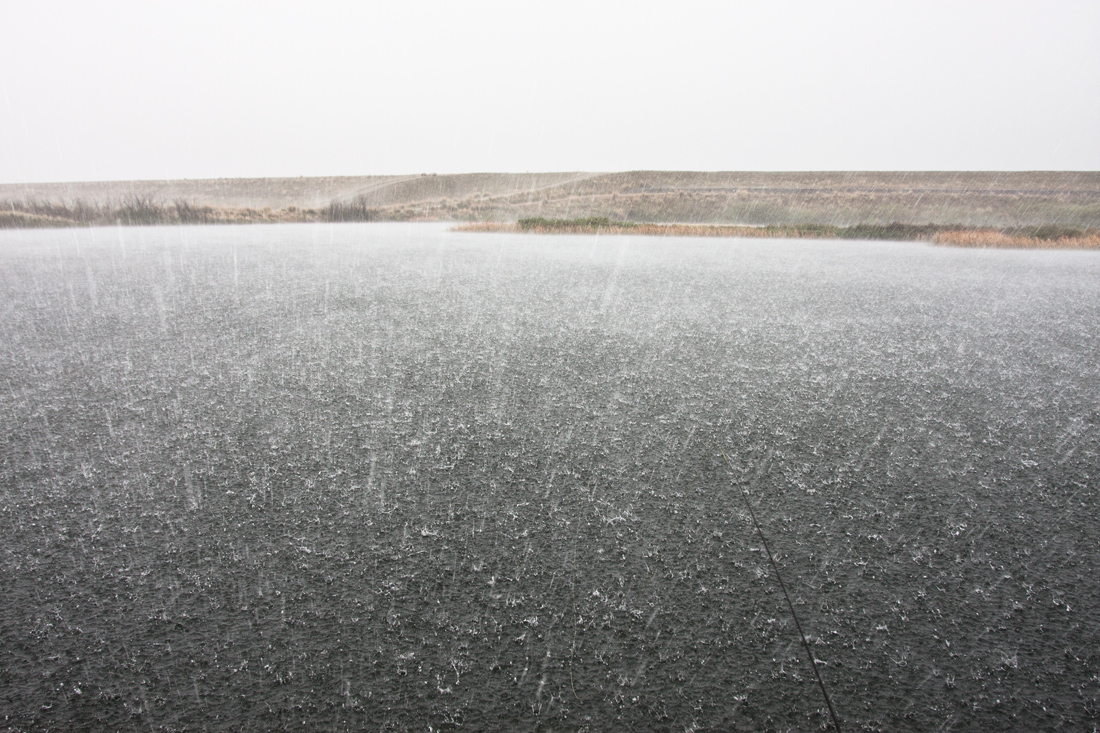 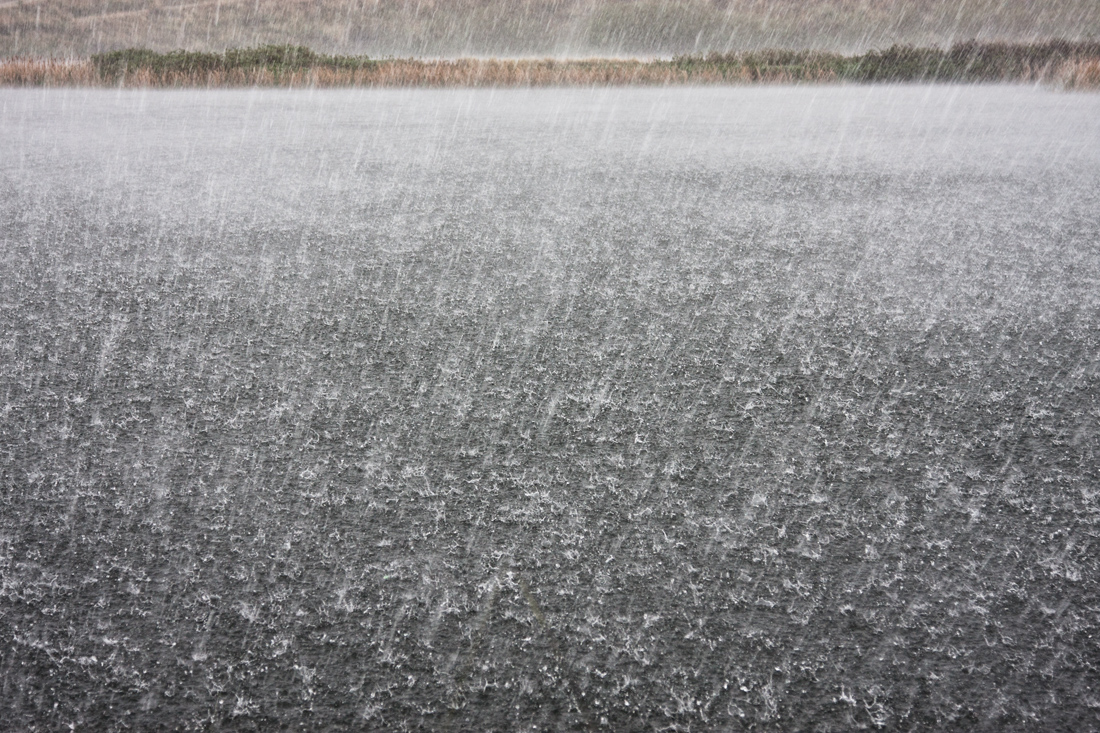 The storm cleared out as quickly as it came in. I’m gonna glaze over the next park cause let’s just say it’s probably the worst angling I’ve done in a long time. We hit a hotspot and since 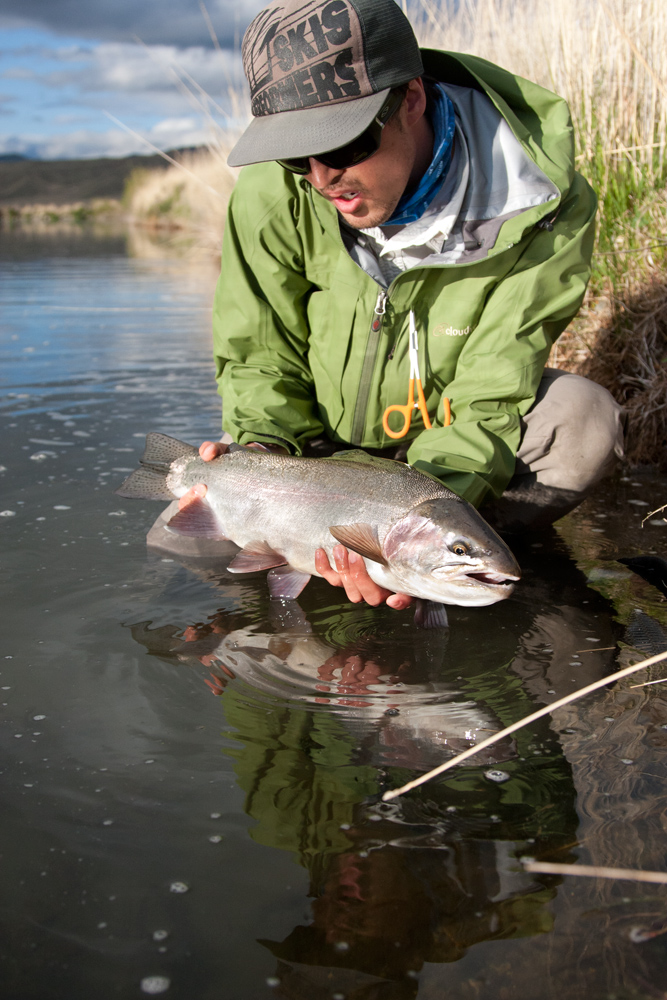 I was the only one without a fish Phil and Derek were kind enough to let me have at it. I farmed like 5 nice fish – one of which head shook loose at the net that was an easy 10lbs. FML. The fish were beasts. The rainbow trout pictured below went on a run like I’ve never seen before. A lot of fish will go in power full bursts, maybe headshake  a bit and go on another run – not this fish. When I set the hook he turned and ran like Forrest Gump. I thought I’d hooked him in the tail/fin/butt or something.  On that first run he ran me from twenty feet in front of me to further in my backing than I’ve seen in a long time.

It would be a miracle if anyone is still reading at this point so the rest of the evening went a little like this…lots of casting practice, Phil tied into another hog just before the sun dipped down, we decided to make the whole drive that night and got home at like 5am. That sucked.

And we all lived happily ever after. 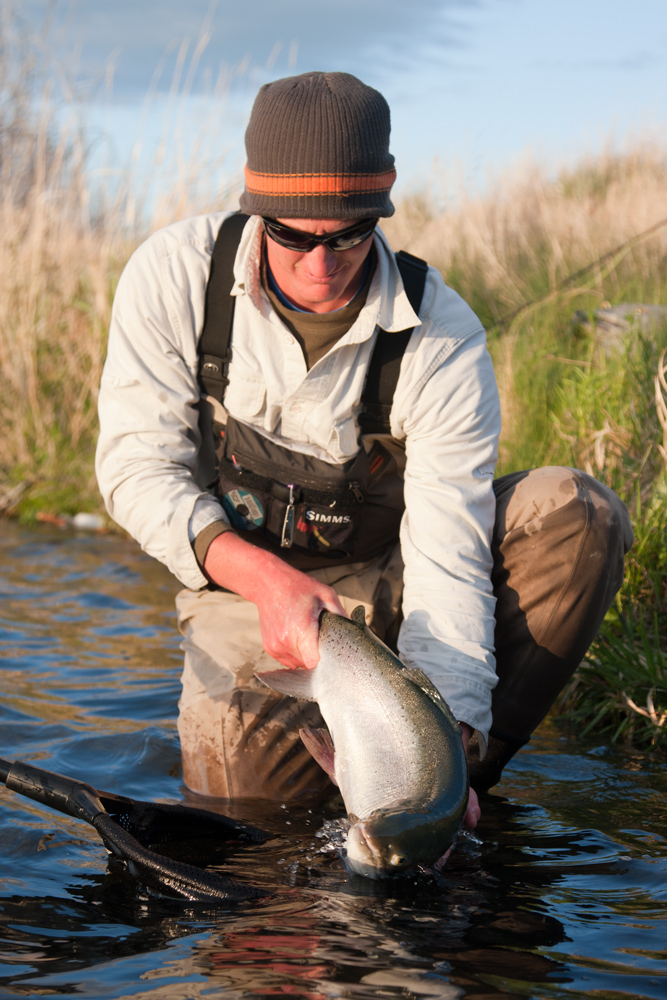 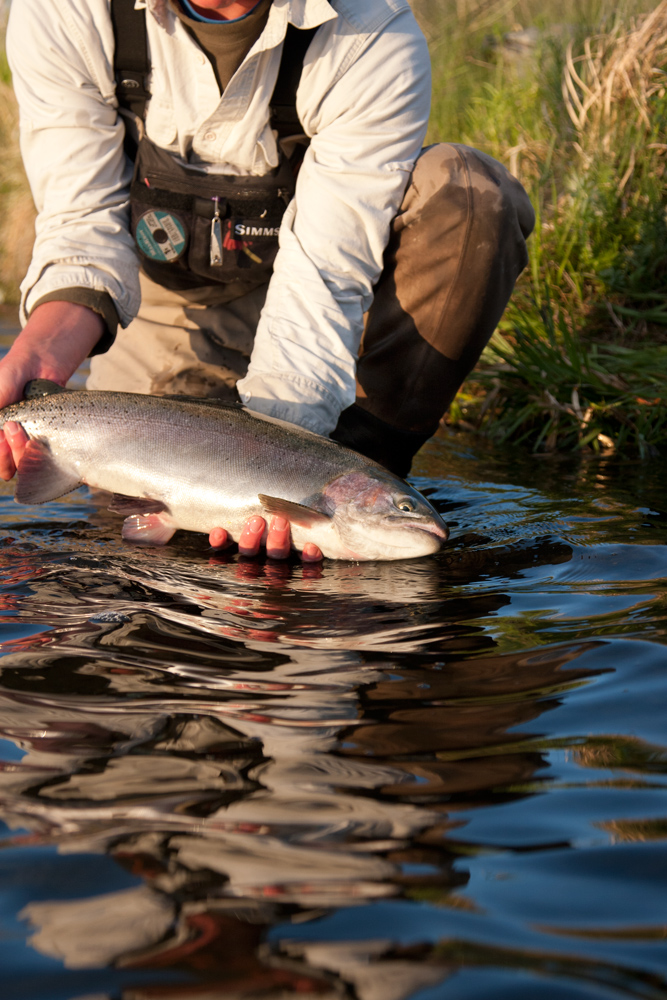