My wife and I had been put in charge of a youth conference and the spot that had been chosen was the good ‘ol Green. We wanted to scope out the group spots beforehand so that we had an idea of the lay of the land while planning things out. That meant a quick over-nighter at the Green.

Now, some may know me as an idiot. This was a time that I proved my slowness. I don’t really like camping and established “campsites” but it seems it’s pretty restricted in the areas surrounding the Green. In looking at some of the places to camp I came across some info on spots on the B-Section. I figured that they were like most designated camp areas – drive up and setup camp. I chose our spot and it was only upon arriving that I realized that these spots required a hike in. Shiz. This wouldn’t have been a problem, in fact, both my wife and I love backpacking…only we hadn’t planned for that so we weren’t exactly packed in a way that was conducive to backpacking. I’ll let the pictures do the talking. 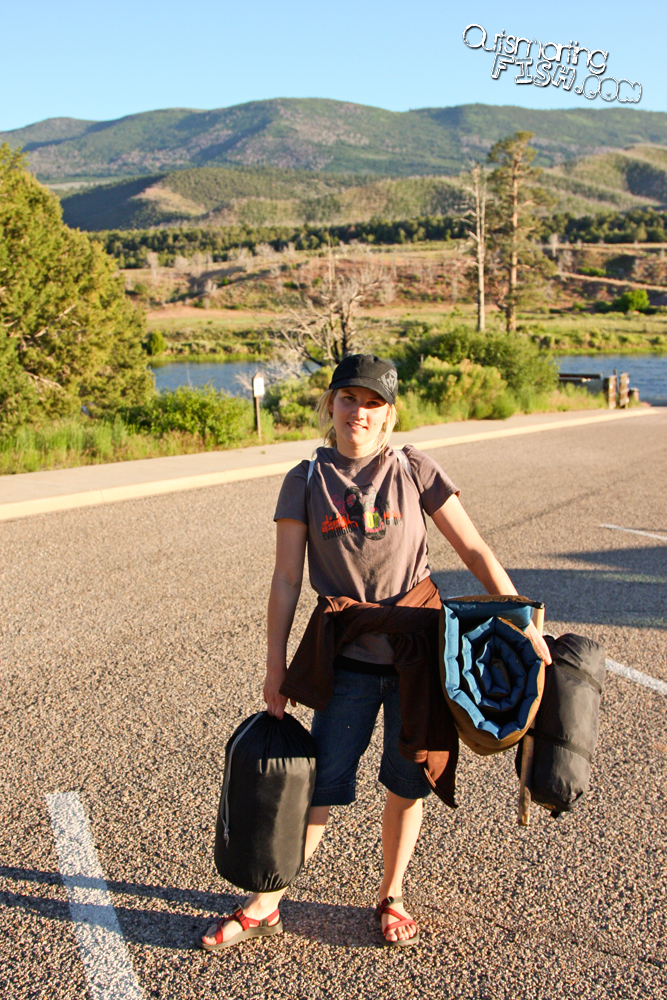 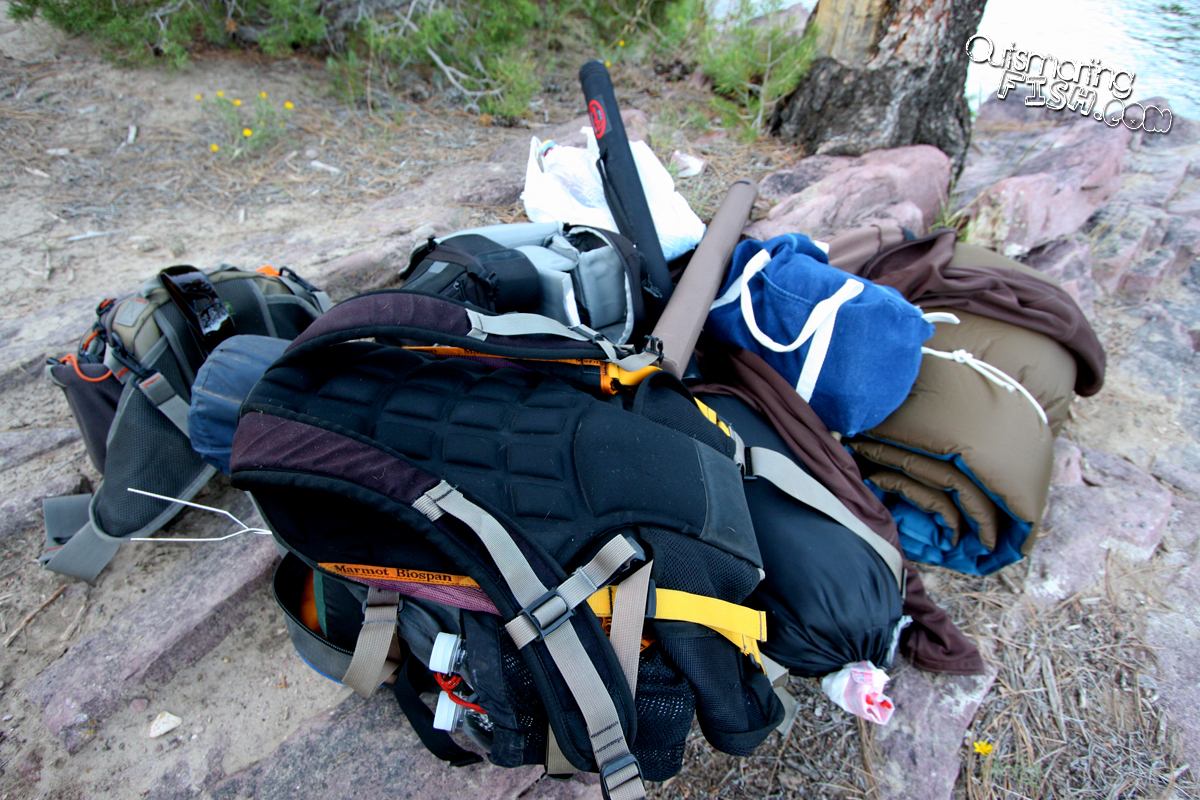 After a sweaty, uncomfortable hike we got to our spot and it was a cozy little spot right next to the river. We enjoyed to solitude. We setup camp and I used the remaining light to toss a line before we prepared our dinner. I wasn’t expecting much out of this trip, but hoped that I’d be able to get my first Green River Rainbow. It wasn’t long before I felt the wiggle at the end of my rod, and I was stoked to see that this first fish was in fact a gorgeous little bow. Check! Snapped a couple and went to make some food.

I have no pictures to show for the next bit of excitement as it was a mix of good and bad luck. After debating whether to hit the sack and go toss a few in the dark, the lady agreed to come with me to go toss some bugs in the dark. I started with a streamer. After a few minutes and no luck I decided to try my friend Mickey Mouse. I was posted up above a slow eddied-out pool. I cast down and across into the current and let my furry friend carry over into the slower water. I was caught by total surprise when a fish slammed my fly on this the first cast. I blew the hookset. My wife was so excited after hearing my stories of mouse fishing. She had heard the splash. A couple casts later my stripping was interrupted by more bumps. The second was solid and I had fish on. Only moments later he came unbuttoned. After all the excitement I had four sets of hits, one fish on, and none to hand. I was stoked nonetheless. 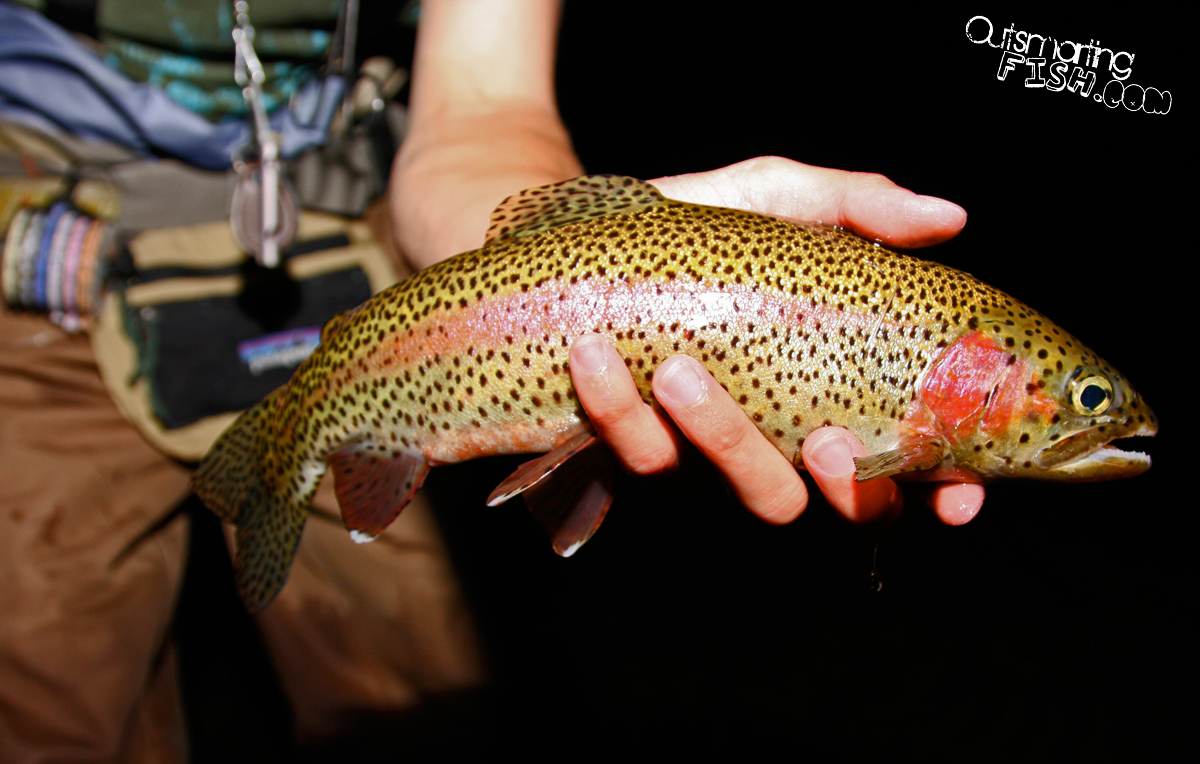 The next morning the lady slept in and I went in pursuit of feesh. After spending too much time on spooky fish, I found some good water. Candice found me just as I was landing my third fish. Good timing. I continued casting to no avail and she got behind the lens. It seems she finally got a decent grasp on how to work my camera as she got some pretty good shots. 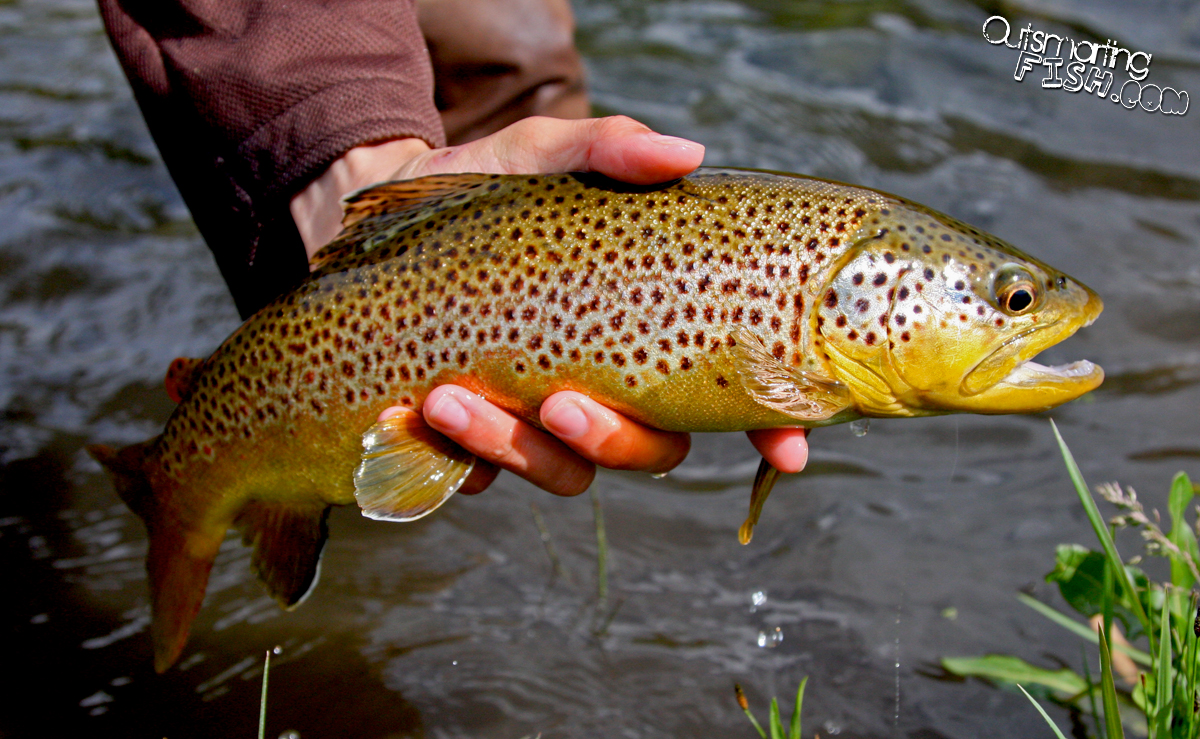 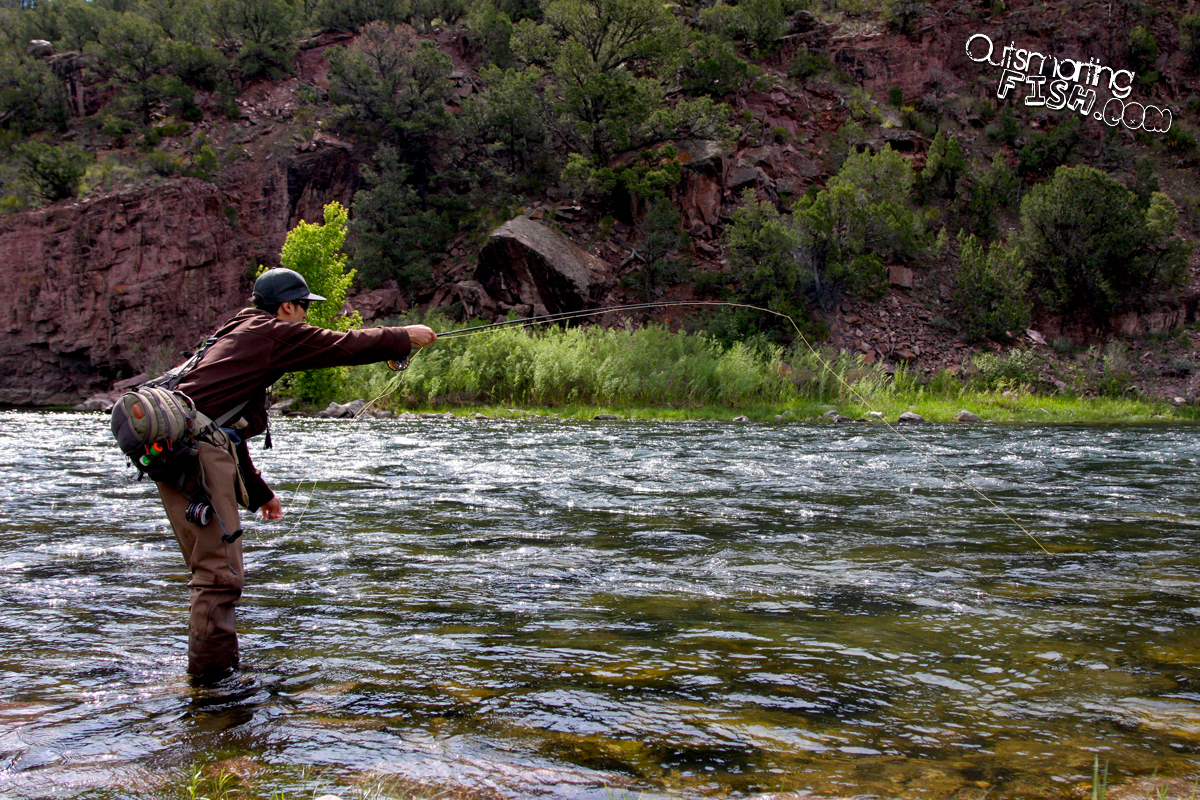 Our day continued with some scouting, a little more fishing, with nothing too eventful going on. However, the rain on our way home brought the brightest double rainbow I’d ever seen. They both extended all the way to the ground. I didn’t really capture it (out my car window) as well as I had hoped and there were no signs of gold or leprechauns in the shots so we continued home. After a fiery sunset we capped off the trip with a burger from my favorite spot in Duchesne. 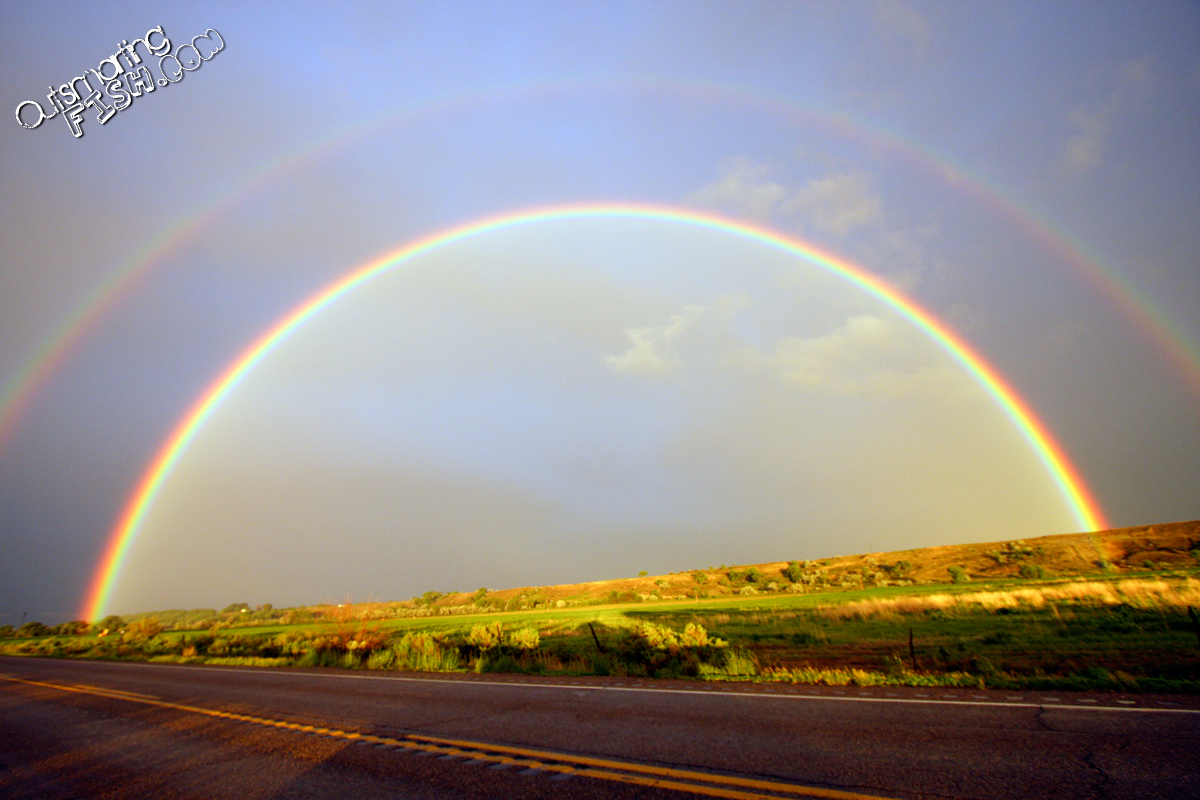 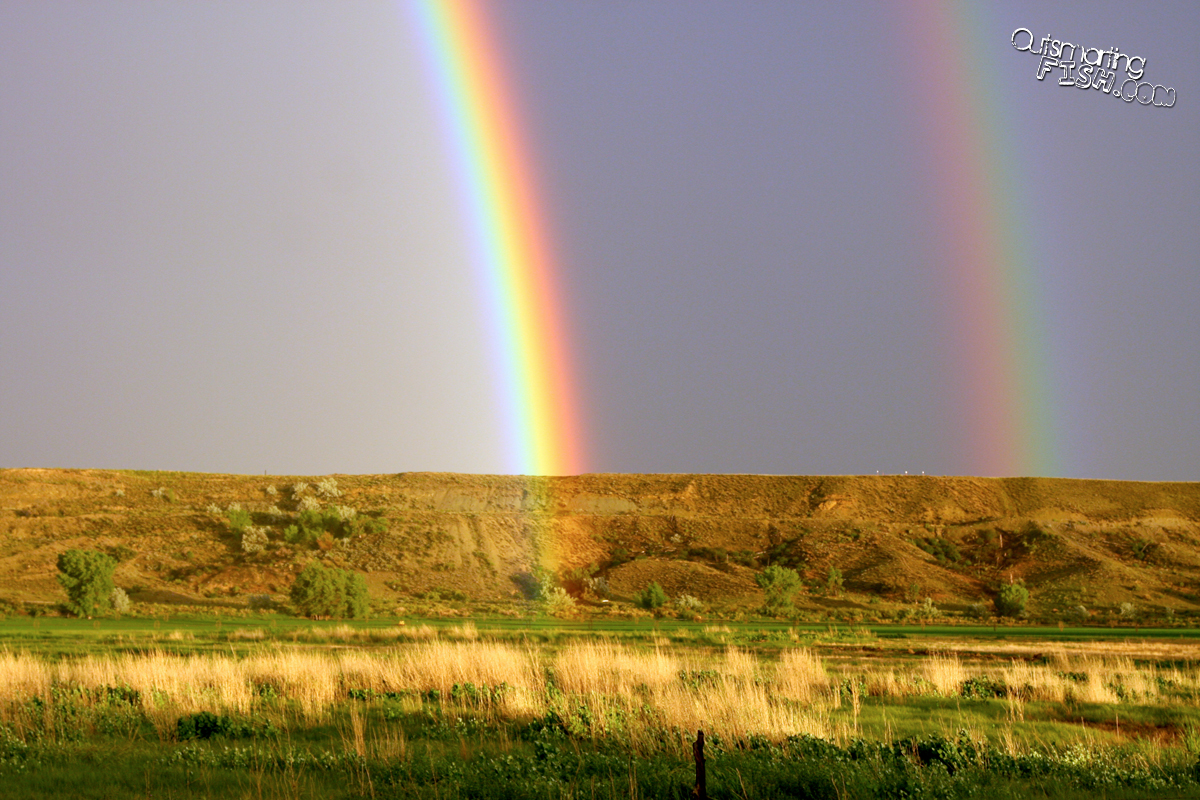 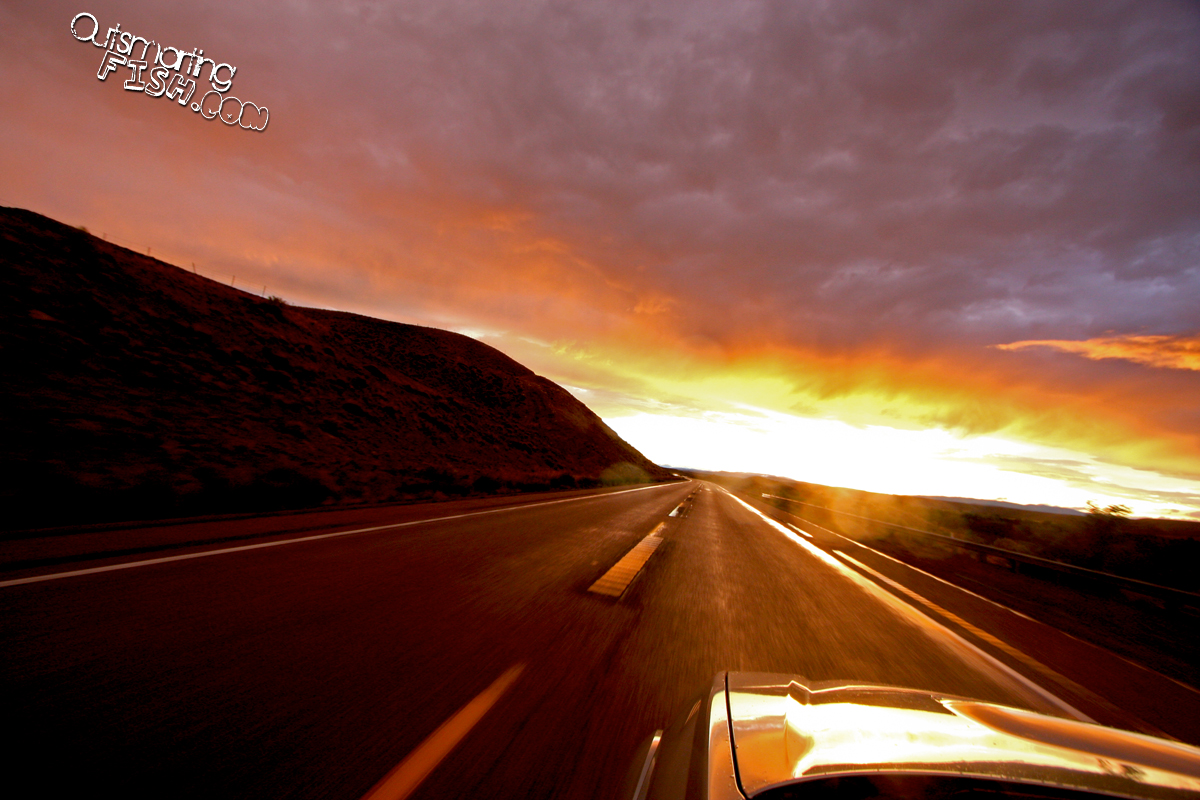