When you have kids you don’t get many opportunities to get out on any adventures without the kiddos. Our first son came much earlier than we originally planned and we wanted to keep our kids close in age so basically we haven’t had much time to play as a couple since we’ve been married. This weekend was to be the first time that we’d both be away from the dudes overnight. We were stoked.

Let me back up a sec. We’ve been slacking on the posts and we’ve appreciated the comments/messages over the last little bit. We’ll do our best to play catch up over the coming weeks. For those that are back with us…thanks!

The car was packed and we set off. It was a trip to spend so much time on the highway not having to worry about kung fu battles erupting in the back seat. Instead we enjoyed each other’s company as well as the wonderful scenery along the way. After some time on the dirt we finally arrived at our destination as it was just beginning to get dark. I turned off the ignition and we stepped out into the cool air. Solitude. Just as I hoped! I got a fire going and afterward setup camp. As we cooked our food in the fire we joked about what our little hooligans were up to, reminisced on old times, and discussed the future. It was awesome. Going on a date hardly gives you enough time to really put distractions aside and focus on the present, so it was nice to have plenty of time to ourselves. You probably didn’t come here to read my personal diary so it’s probably time to get to the fishing!

There’s nothing quite like waking up outside hearing only the sounds of the mountains. My lady was still asleep and after lying around for awhile I decided to head out and get some morning solo time on the water. It was quiet and beautiful morning. I rigged up my rod and headed to the water. I slowly walked the banks surveying the water. An occasional riser persuaded me to tie on a dry. I continued to quietly walk the banks until I found a perfect perch on top of a rock. There I awaited the next set of rings. With each haul, the sound of my textured fly line broke the silence as it flew through my guides. My fly softly overturned and found it’s place quietly on the water’s surface. Nothing. After a few moments I gave it a twitch or two. Nothing. Hmmm. I awaited the next rise and tried again. Equal results. I looked around the water, did some thinking, peered through my dry box and chose the next fly. The next slurp came near a floating portion of a submerged tree a ways off the bank. This time my cast was rewarded with a second slurp. A familiar sound brought a smile to my face – the sound of line being ripped off the water as a hook is set in the upper lip of an unsuspecting trout. A chuckled to myself as I began stripping. Naked. Just kidding, duh. I descended from my perch and met the first visitor with a wet hand. Beautiful. With a few angry flicks of the tail he was off. I shook the water from my hands and ascended back to my lookout. I surveyed again, still feeling the high from one of those moments that characterizes what it is I love about fishing. There I was…in a beautiful place, having just spotted a riser, having made the necessary cast, a visual eat, and a beautiful fish. Too cool. 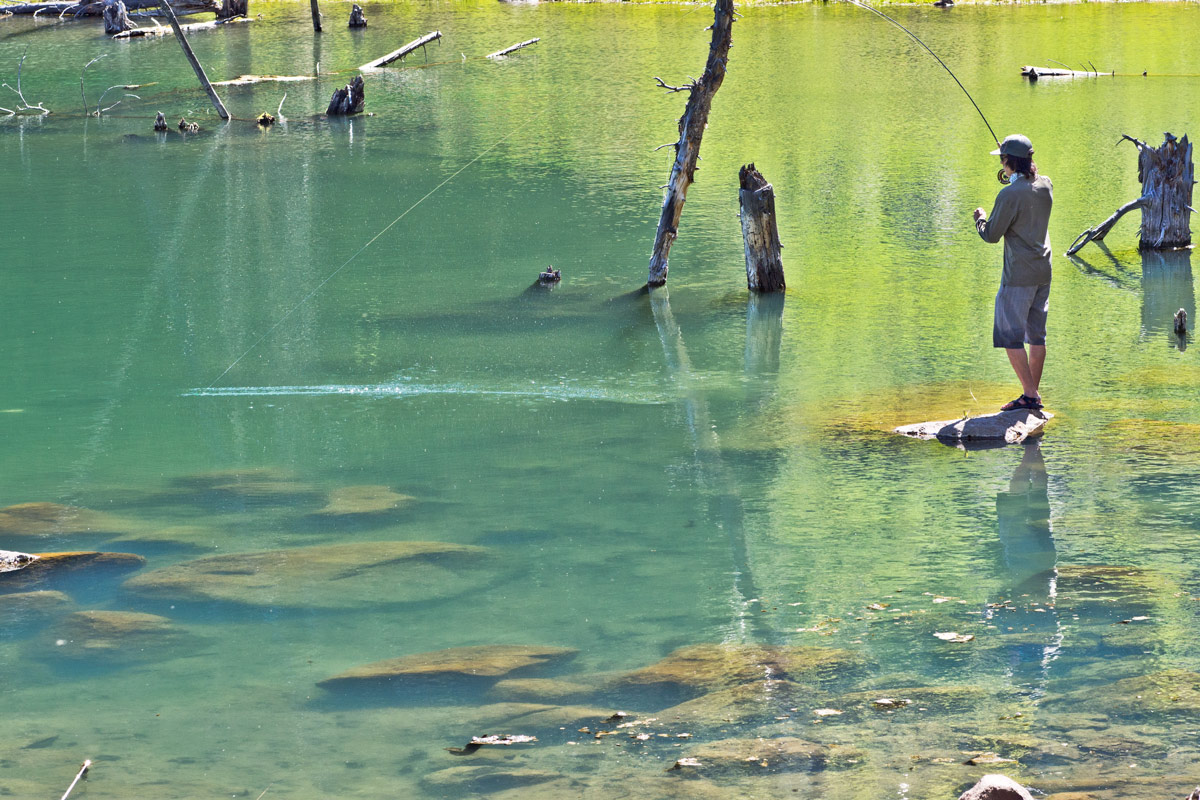 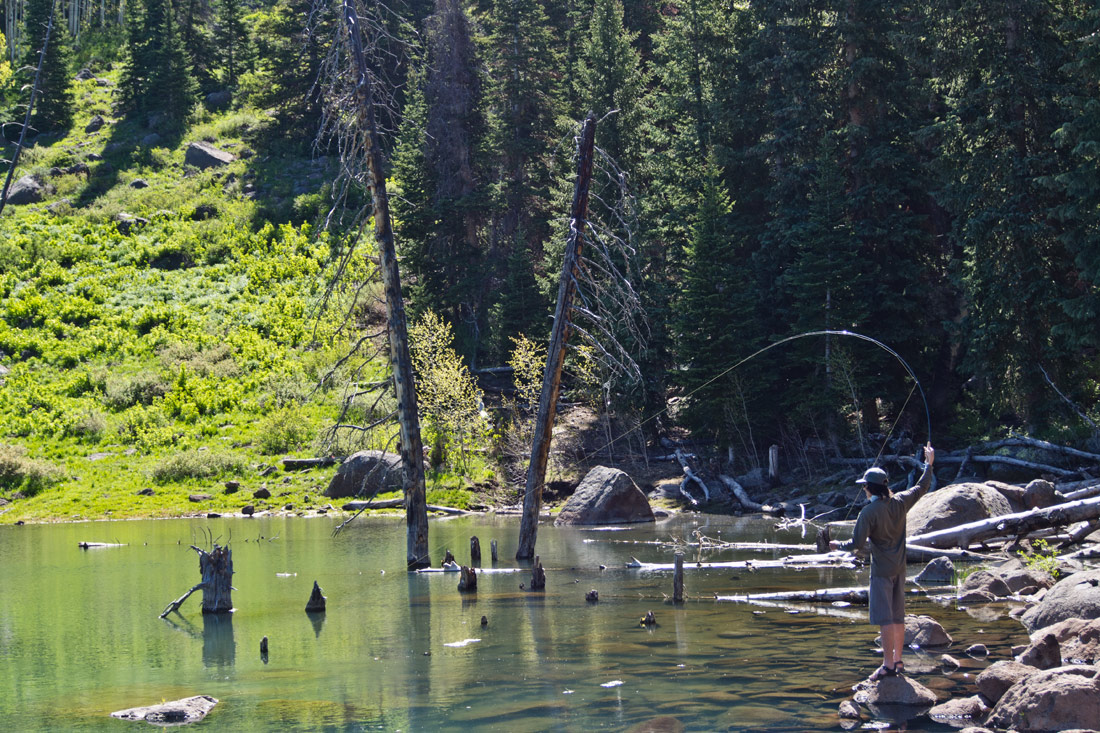 After awhile, sleeping beauty emerged and watched me cast to fish. After catching a few more I joined her for breakfast and preparation for the days fishing together. With mostly a few casts here and there over the last number of years, she’d only had two real days fishing so I was stoked to finally get her on the water again. She’s a quick learner and did really well throwing hoppers to small small browns and fishing an indicator to cutties and tigers. Today she’d be going after a new species – brookies! 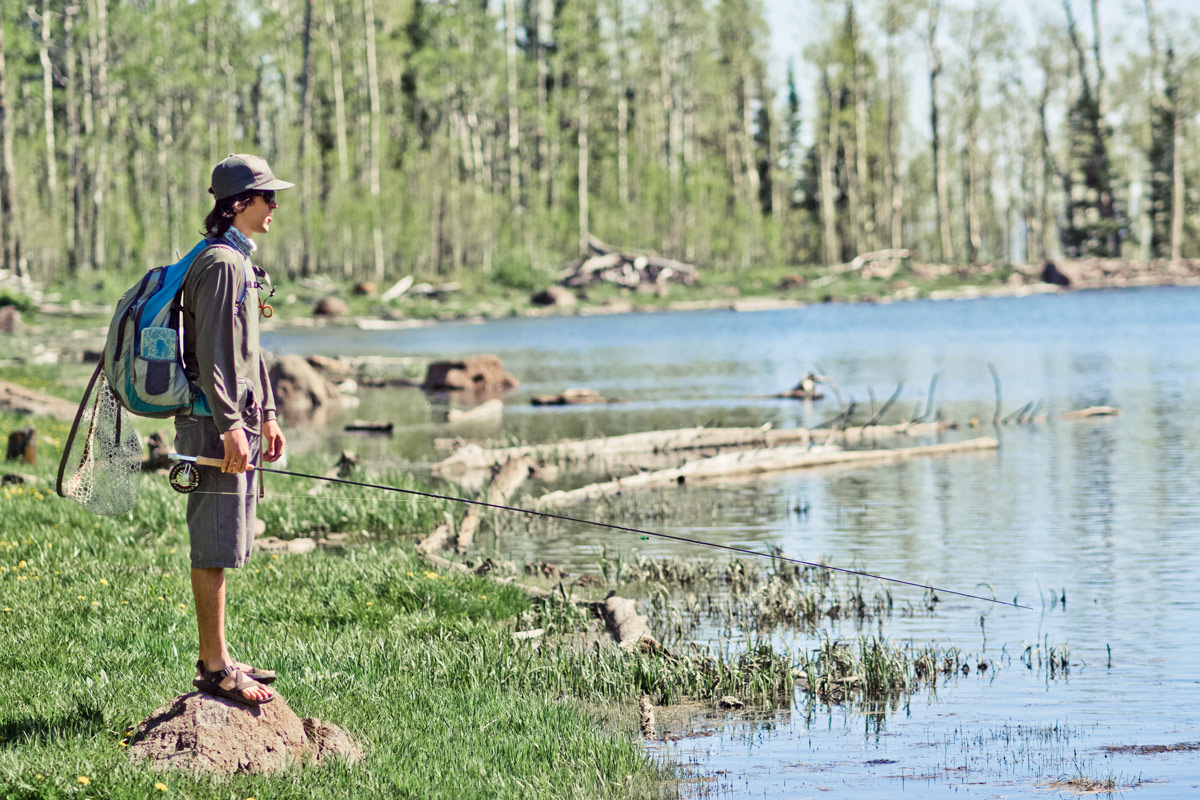 We walked the banks slowly as I looked for both fish as well as good looking water/structure. Eventually we came to a very inviting spot. There was a couple pieces of structure and the lake bottom had a very quick and steep grade. It just looked fishy! And fishy it was! I removed my fly from my hook keeper and flicked it in the water. No sooner did it sink a few feet was I surprised by a flash and tug! Unprepared, I set the hook well enough to stay buttoned for a moment. Dang gina! My heart beat with anticipation and I fastened my fly to my hook keeper and got the lady ready for battle. She made a short cast towards the structure and we counted it down for a few. I then instructed her to make quick, jerky strips. It wasn’t long before the aggression of a little, feisty brookie got the best of her fly. These little fish pull! I coached her and we got her first brook trout to the net. The beauty of the brook trout is hard to beat and we sat an admired the little spunky specimen. 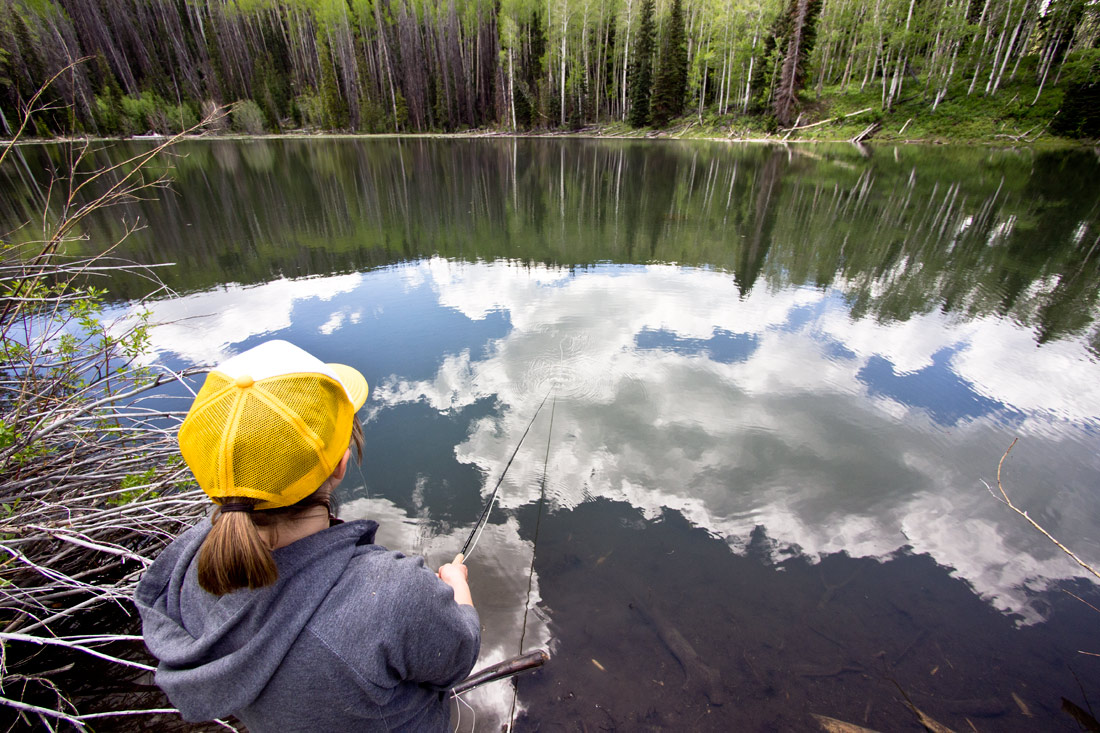 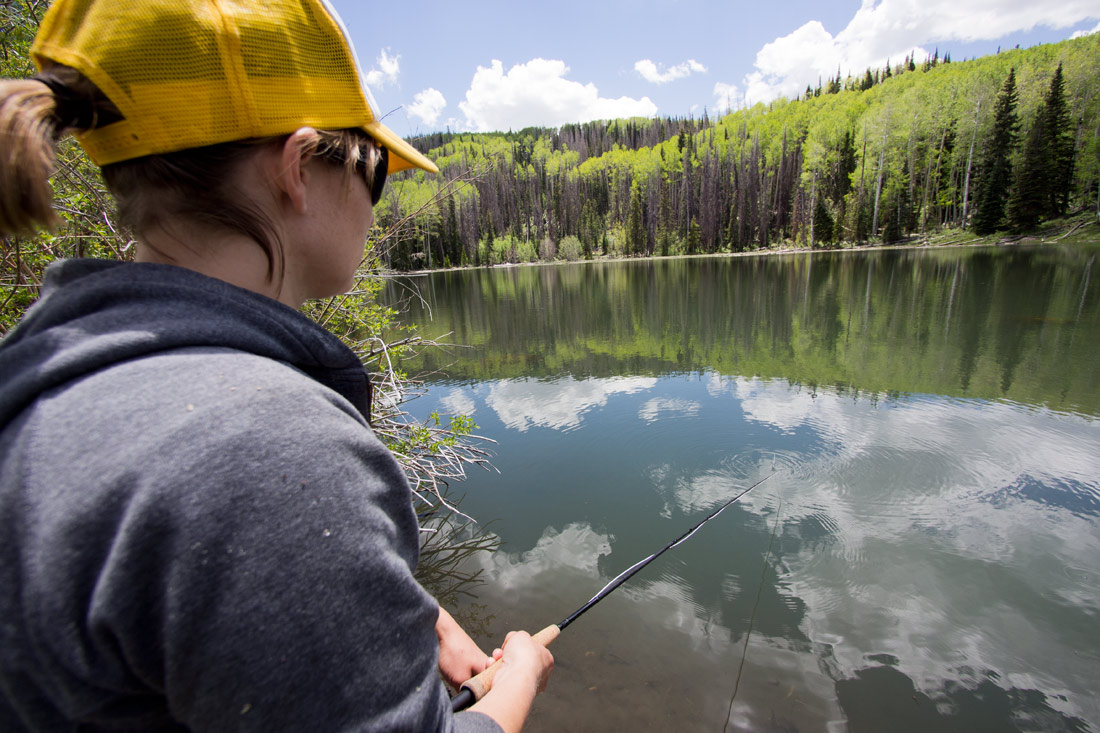 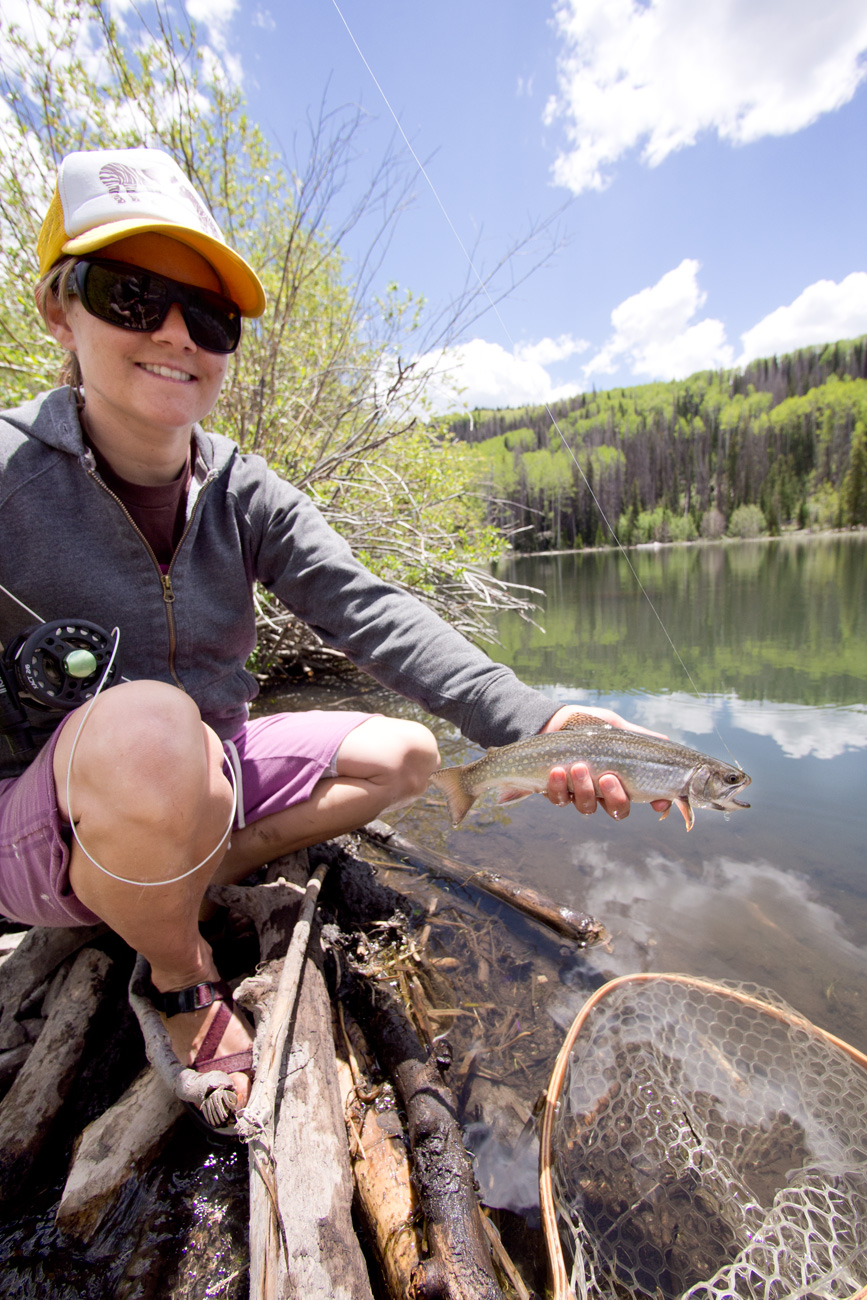 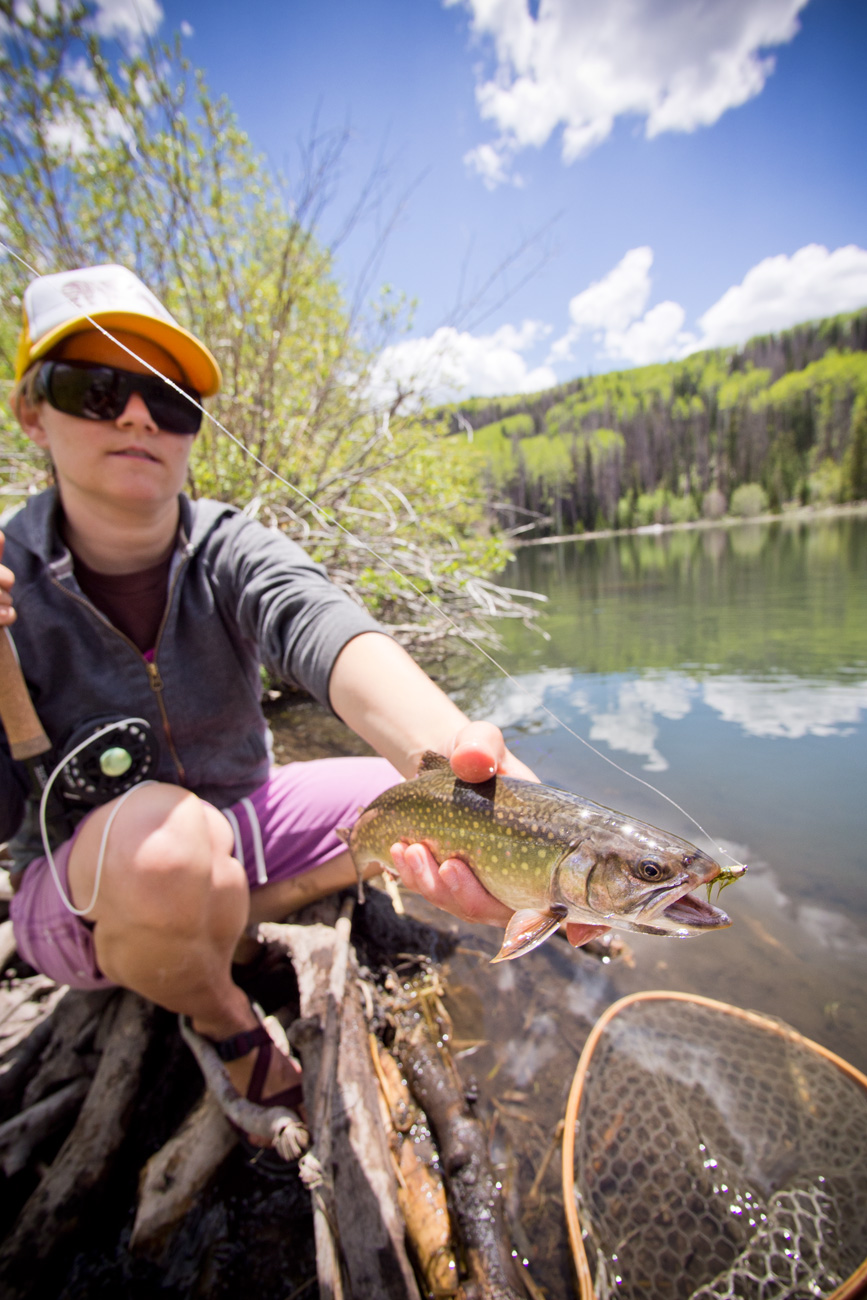 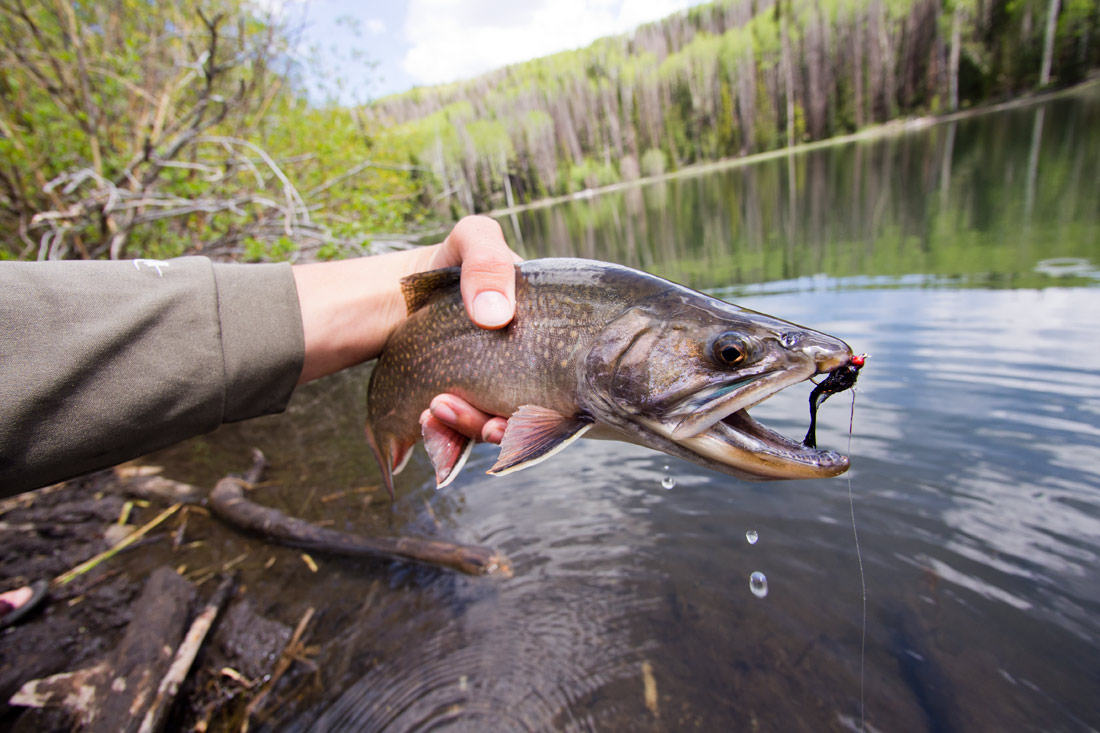 We got a few more to the net and lost a few as well before moving on. We came to a spot spattered with logs. It was way too inviting to pass up. There was one log in particular that was undoubtedly providing cover to a fish or two so I tested the piece closest to us. An aggressive swipe proved there were fish festering below. Getting your bugs right in the money zone would require a somewhat challenging cast. The spot was too good though so to my wife’s dismay, I insisted that she give it a shot. After a number of attempts she did miss a player but frustration resulted in a tap out. My first cast was made right into “the lair”. You know the spot. One of those where you know the dinks aren’t allowed to hang out in. Sure enough, the tough guy came out and slammed my bug. It was a hit an run because after he teased me with how strong he was he came unbuttoned. Bummer. That was the best fish of the day. My wife hit me. I had warned her that they were in there! I made another cast and brought it further down the log and other dart shot out and went blammo! I couldn’t believe how hard these brookies fought! They must be eating protein in here. We got it in the net and I reassured her that it wasn’t the easiest cast and reminded her that she’ll just need to fish more often! 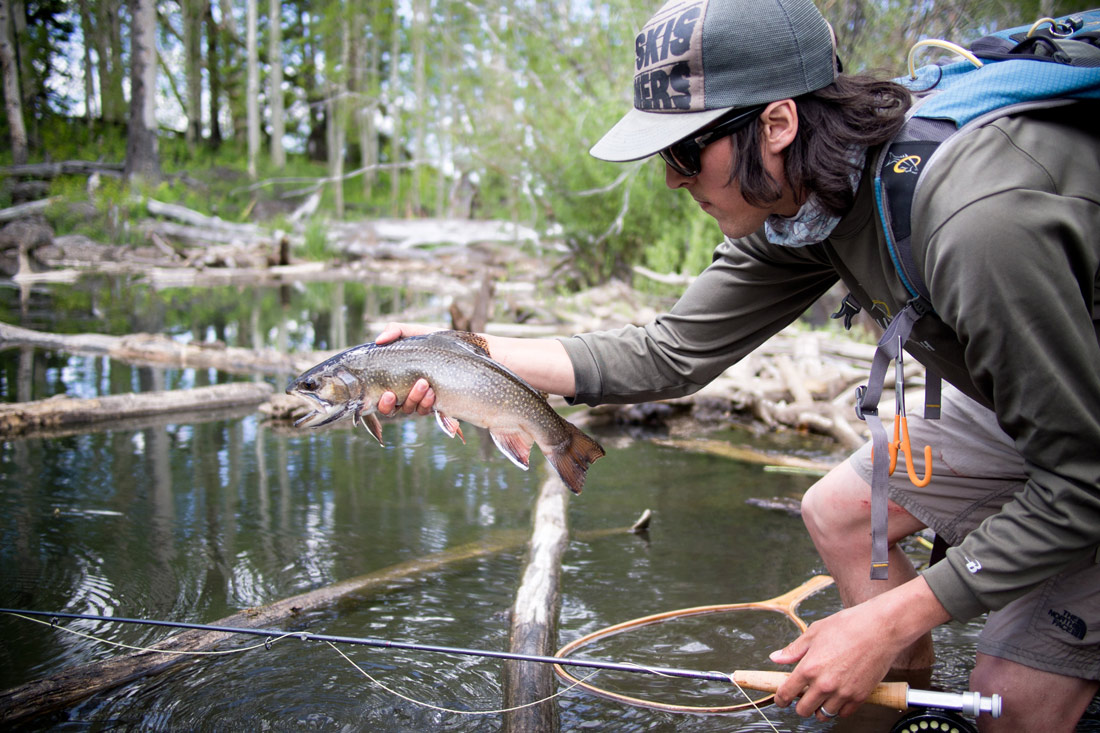 The next couple hours were awesome. After fishing out the jam, we gave each other some distance and posted up casting into some promising deeper water. We routinely pulled in fish. It was so much fun feeling the strength of these fish and they were a pleasure to play on my Göran Andersson 4wt. It’s a full-flex rod so you can feel it bend into the cork! This rod has backbone too – I’ve landed 24″ fish on it no problem. It was equally as fun watching my wife do work all by herself. I didn’t have to coach her or do anything other than hoot and holler when she landed fish – or lost one! I was impressed by her overhead cast considering we’ll get out in the yard and cast around a bit a couple times a year. Her roll cast was improving as well. I had her fishing the LOOP Incite kit and I honestly feel like the larger and more aggressive head on the kit’s fly line helps a beginner FEEL when the rod is loading correctly. 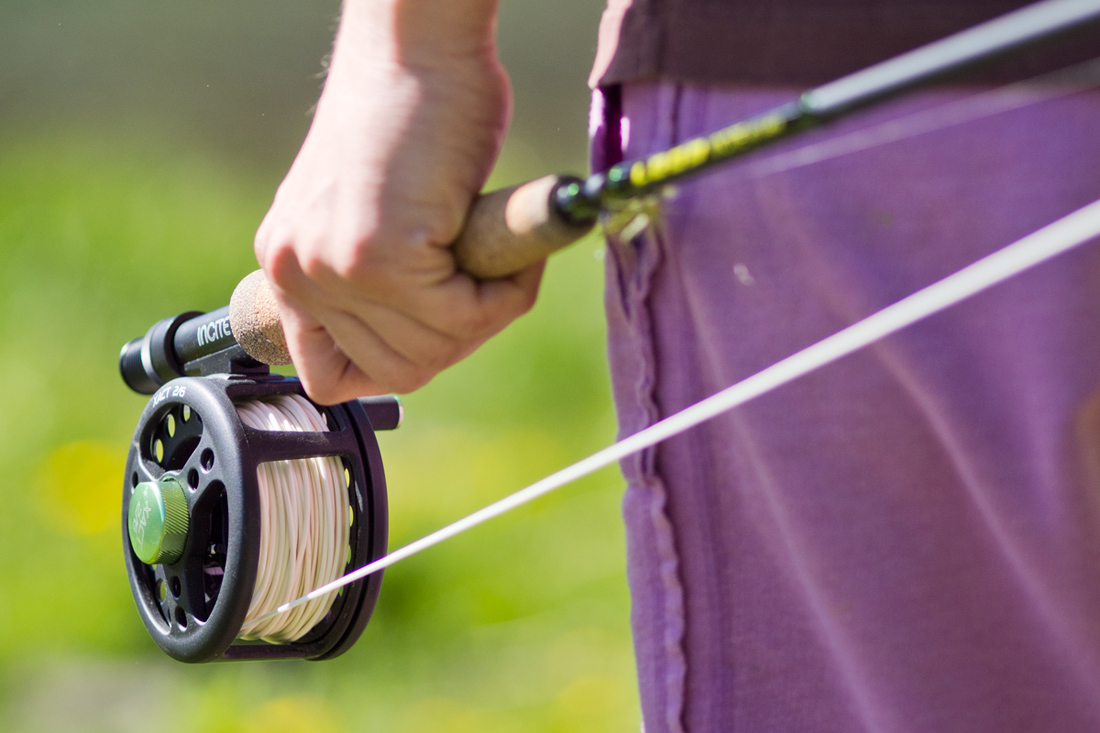 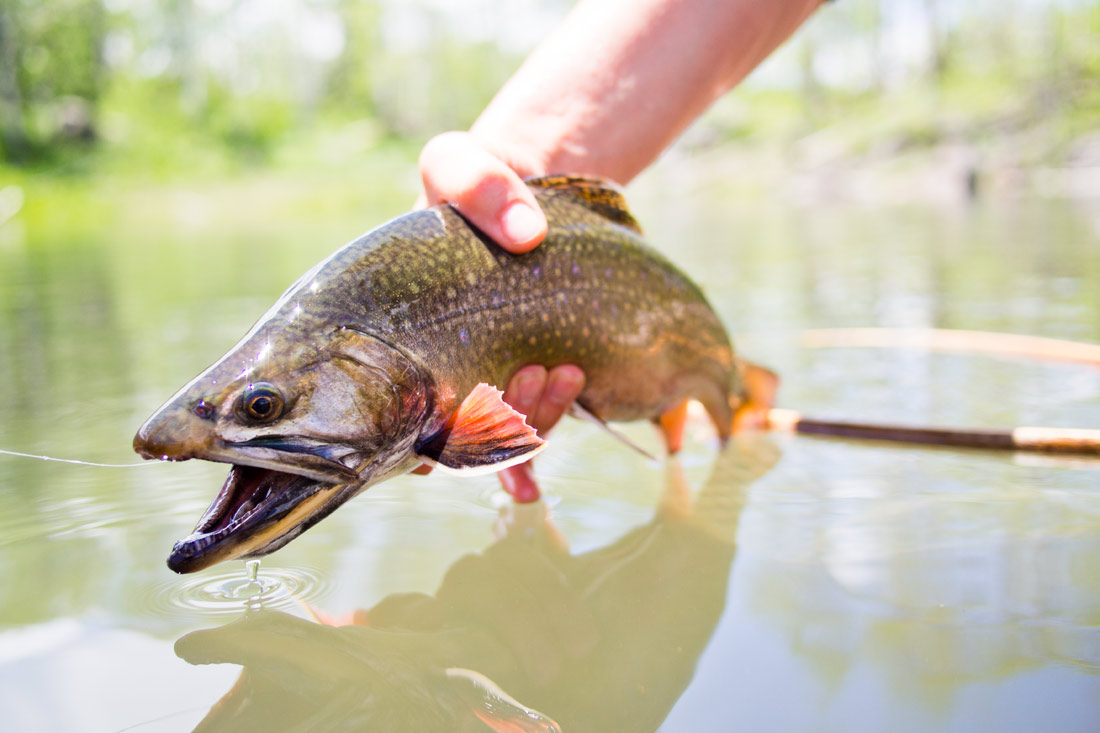 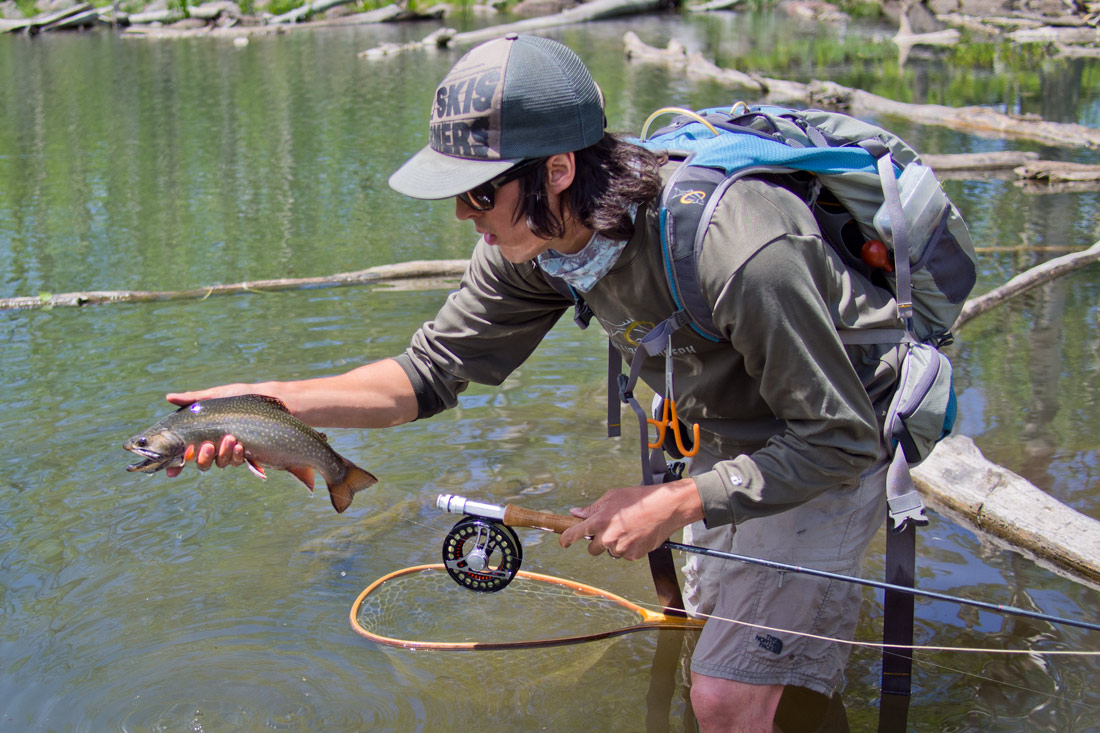 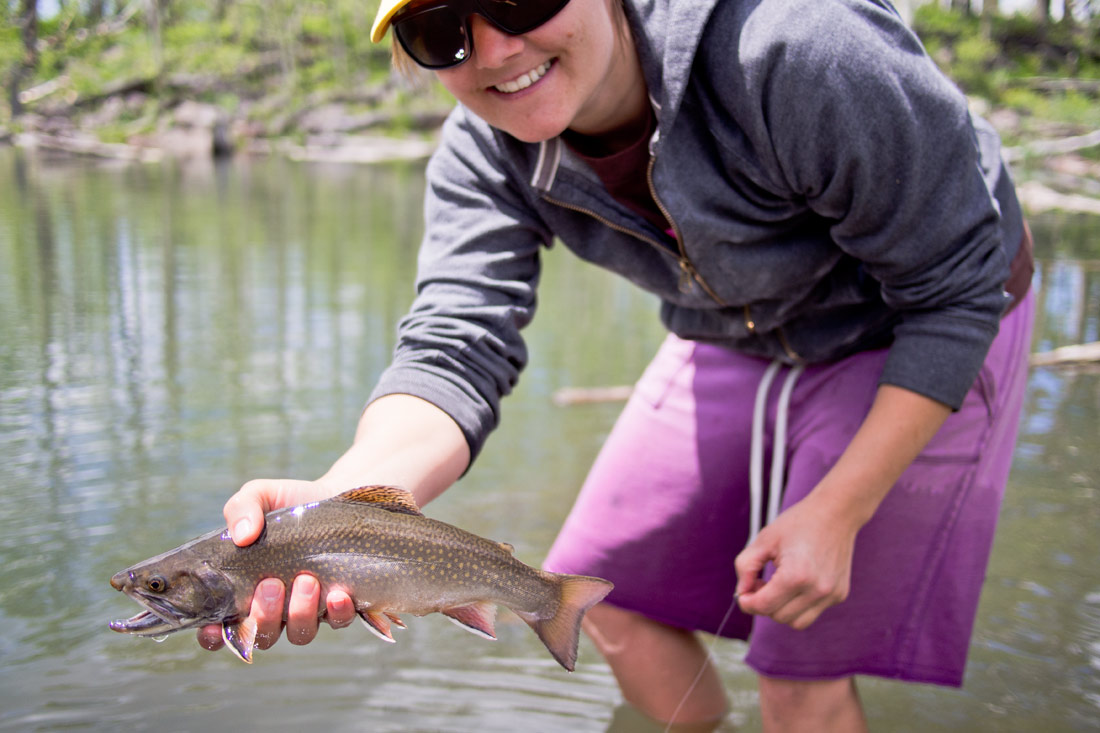 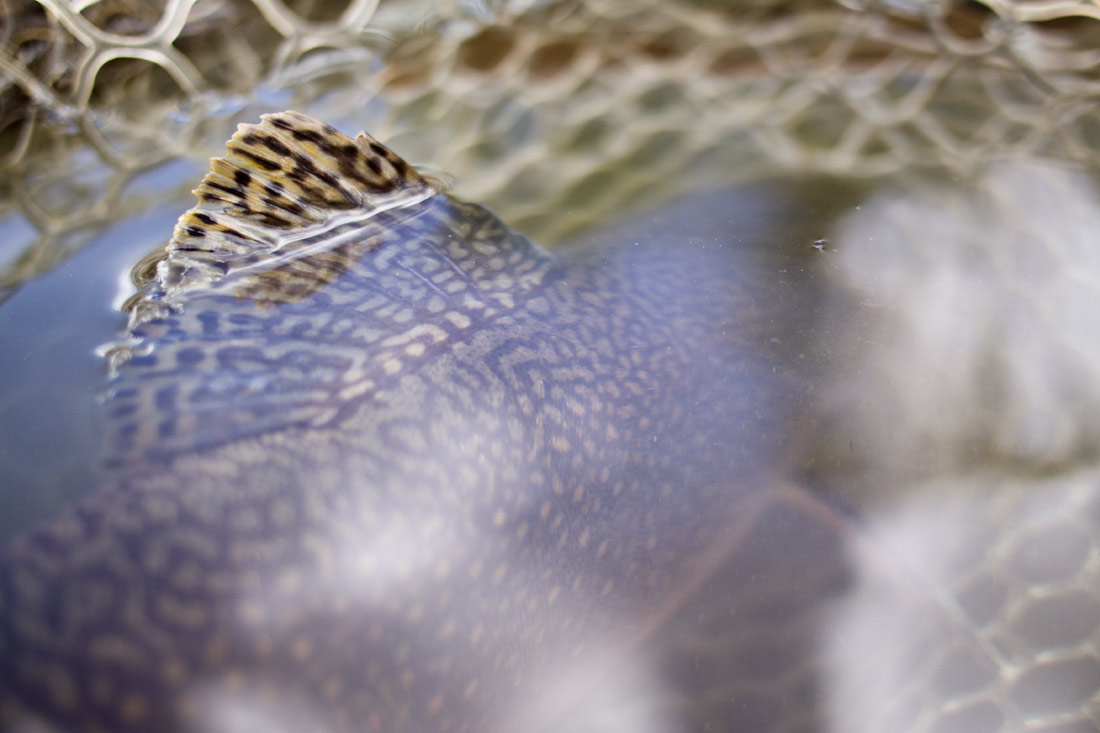 After landing our share of fish it began to taper off and we decided to make the trek back to the car. What a satisfying day. A great day out on the water is fun enough, but one with the woman of your dreams who is also catching fish? Shoooot dude. Life is good. 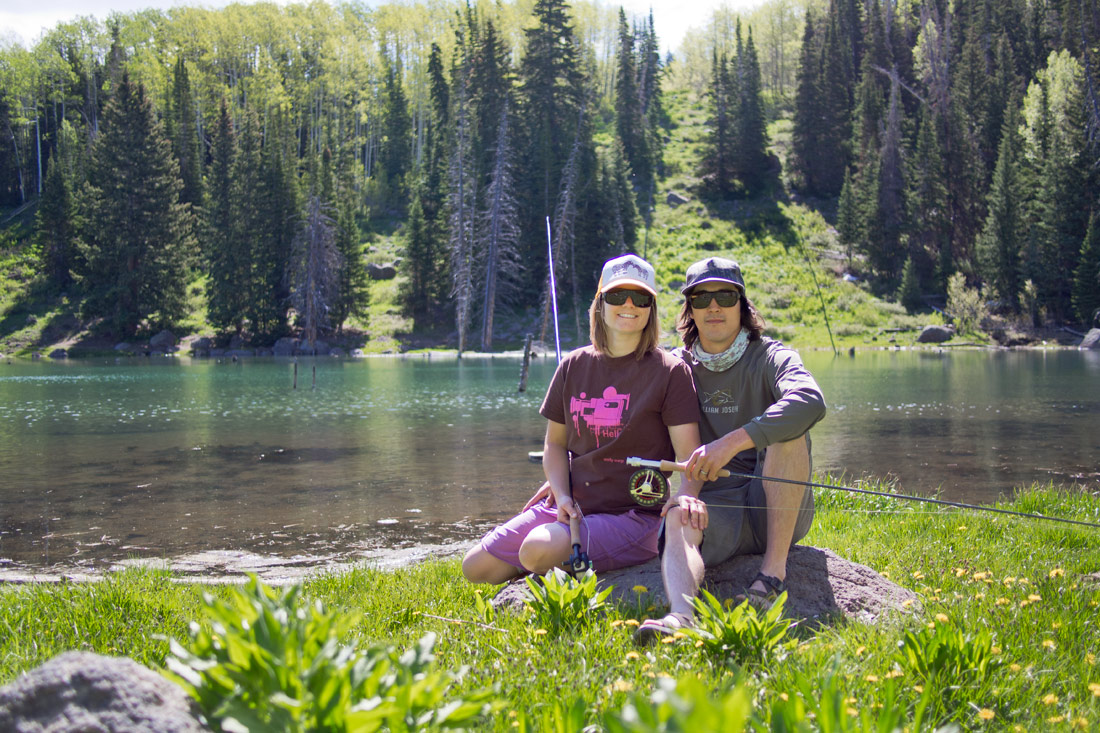 The day/trip couldn’t have gone any better. Well, I guess I could have done without that misstep that ripped my toenail completely off my toe. Hiking, wading around for hours isn’t quite as comfortable when you got some fresh flesh soaking in the mud/water. Scraping that clean when I got home wasn’t fun at all. And I’ll leave you with that beautiful visual. Maybe scroll back up and look at a brookie or two before you close this window. Or better yet, check out this old brookie post now that you’re probably jonesin’ for some brookie love! Thanks for reading ya’ll! 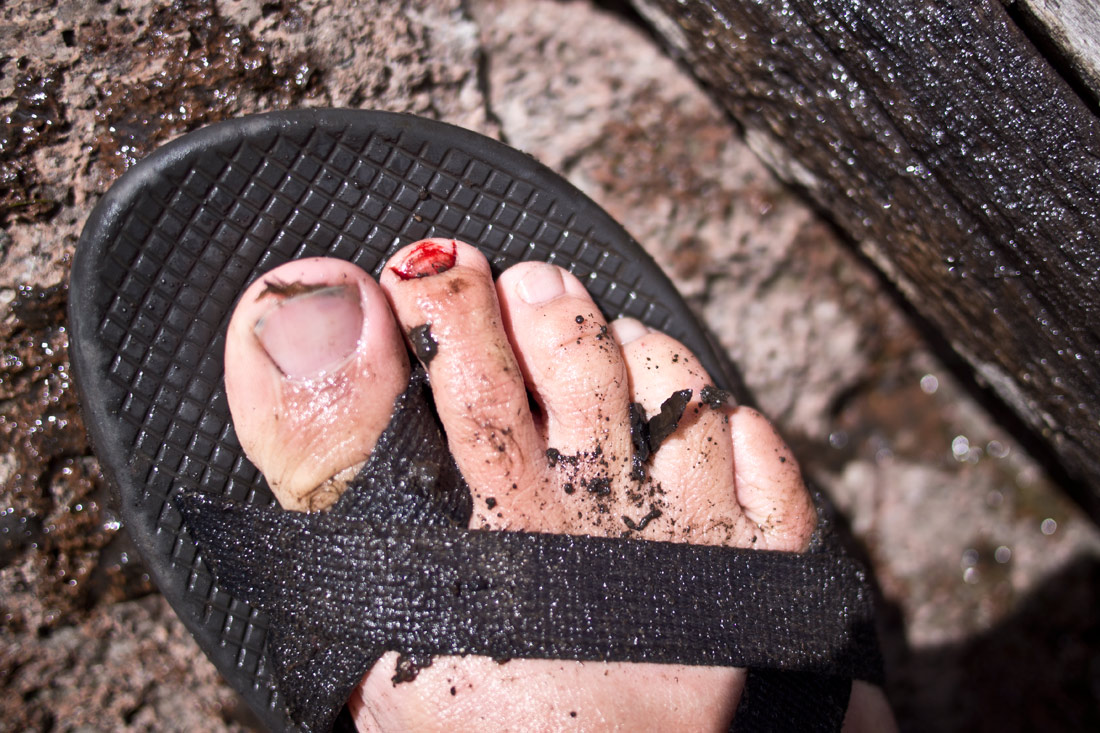