It was Super bowl Sunday…at least to me. Today I would get to see Argentina’s fabled Jurassic Lake and find out if it was all I had imagined it to be.  Stories, fishing reports and videos: today I would experience it for myself.  I rigged up as though heading to battle, I strapped on my WillyJ Coastal pack, made sure my my chest pack had all the necessary ammunition for the day and assembled my weapon of choice.  Dirt flew in my face as we ripped down the steep, rocky trail on 4 wheelers toward the lake but I didn’t mind, I was minutes from catching the biggest Rainbow Trout of my life.  I expected harsh winds, crashing waves and pounding weather but as the lake came into view all was calm.  The lake known for white caps was flat and the wind, non-existent. She seemed to welcome us, promising more than what seemed real.  As we began casting I waited, arms tensed ready for lightning to strike at any moment.  I knew there was a fish over 20 lbs with my name on it.  My heart leapt as the fly stopped and I set the hook but, rocks don’t fight back. I broke off, retied on a fly and kept working the shore.

Nothing was happening except the clouds slowly rolling by.  I had seen all the Jurassic Lake videos of the Loop camp and guys catching fish on every cast, I thought what is going on here?  Are there not 20 lb fish everywhere in this lake? Isn’t fishing a no brainer here?  I glanced at the sky and watched the clouds pass as we moved down the shore, the clouds seemed to be thinning.  As we came to a small point with a steep drop off the sun slowly broke free from the clouds and warmed the air, all of the sudden the my line went tight as an explosion blew water everywhere, I WAS ON! The fish jumped several times in succession which gave the appearance that it was raining boulders.  Always feeling it better to be over gunned than under, I had my 9wt. in hand and lined with 20 lb maxima. None-the-less the rod was doubled to the cork as the fish quickly pulled line from the reel.  Minutes passed before a quick scoop of the net let me hold my first Jurassic Lake rainbow trout for a few pictures before being spayed in the face as the picture perfect creature speed back into the depths. Mind blown and in complete bewilderment, I sat down on the shore to take in what had just taken place. This first fish was about 11-12 lbs and shaped like a muscle built torpedo. 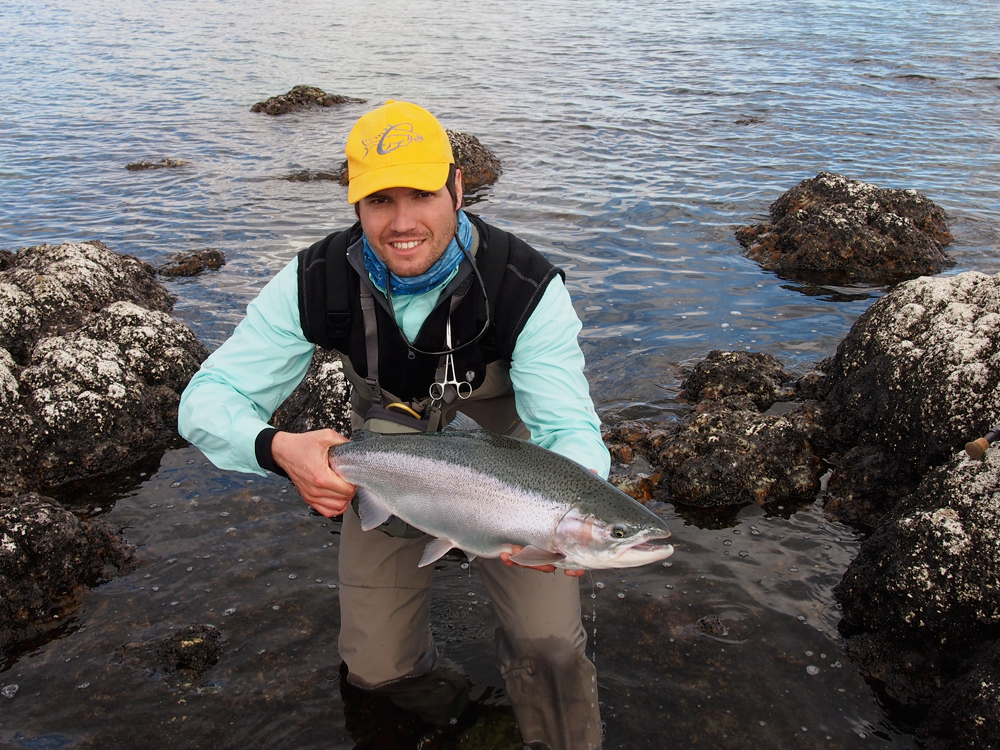 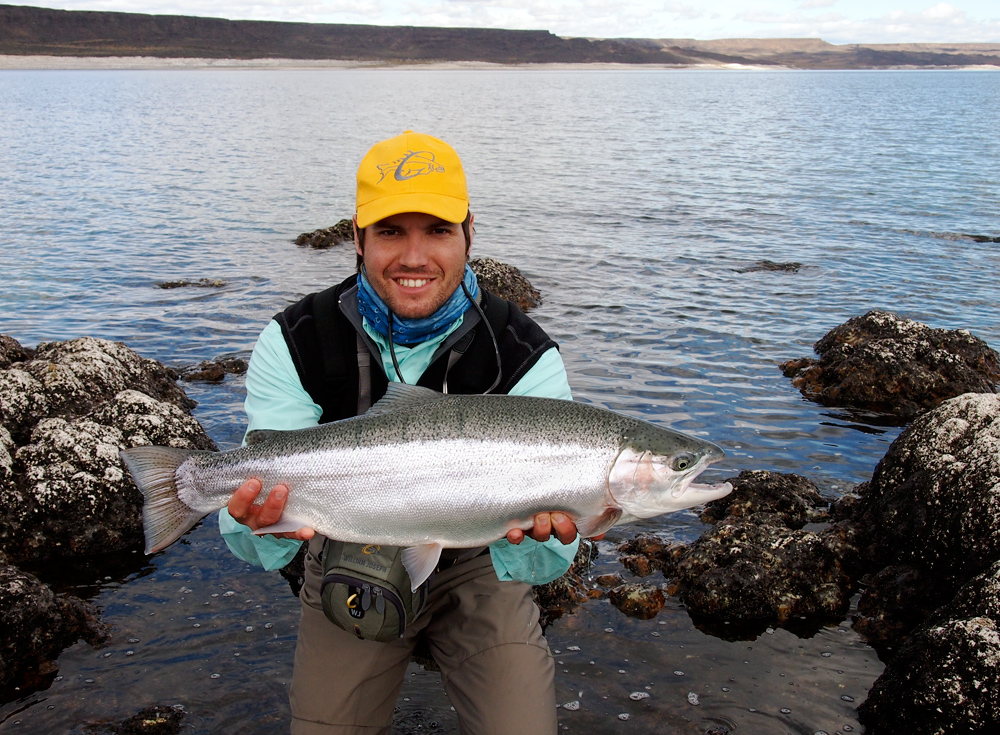 The fishing stayed steady through-out the day, but it was not the easy every cast produced a 20 lb rainbow as the Loop camp would have you believe…. it was better.  We had to work for every fish which made each one memorable and special.  They all hit like a hammer, exploded upon the set and fought harder than I have ever seen a freshwater fish fight. The calm lake also allowed for us to sight fish pods of cruising rainbows (more to come on this) . By the end of the day between my dad and I we had landed roughly 15 fish, the biggest being 14 lbs.  The fish truly averaged 8-10 lbs and we had lost many more due to massive jumps, powerful head shakes, missed hook sets or whatever else could go wrong, none of it mattered when you just experienced the best fishing day of your life! I couldn’t believe I actually experienced Jurassic Lake in the flesh!