It’s the Fourth of July and my family doesn’t really have any traditions so that left me free to hit the water. My little son is only a month old now so the lady is more than happy to stay home and sleep in. I figure most will be at the parade or similar activities. It was a beautiful morning. I decided to hit a stream that I had passed a million times (many times on the way to fish other waters) and never fished. I had heard many different things about this stream and so I didn’t really know what to expect.

Once summer hits I try and fish hoppers as much as possible. I fish them probably more than I should. I don’t care I love it. I’d rather catch fewer fish on hoppers than fish another fly. I parked and made my way across a field to the river. It was morning but I was amazed at how many grasshoppers were flying around left and right as I walked through the field. I hoped the fish had been keying into them already this year. I got to the water and it was running slightly off color but the water looked great.

I started fishing likely spots to no avail. I covered about thirty yards or so pretty shallow water with a few decent looking holes hear and there when I spotted a short undercut bank that looked like money. There was a spot on the opposite bank where the water shallowed and sort of eddied out. Where the eddy came back in there was a protruding undercut bank with tall grass growing on it and a branch hanging out over the edge. The water at the undercut was probably a foot or so deep. I placed a cast about a two feet up from the protruding branch where the bank started. My hopper floated down under the bare branch and I saw a form come out from under the bank and come up and sip my big hopper. It was beautiful take! It couldn’t have played out any better. It was the type of spot, cast, take that I dream about. It was a nice 18-inch fish. I brought it in and got it in the net. It was a gorgeous, densly-spotted male. It had amazing blue markings on the gillplate. I got it back in the water and proceeded upstream.

Over the next hour or so I became very confused. I fished some great looking holes and got no takers. No hits, no spooked fish, nothing. I din’t see anything. I switched flies numerous times. Tried streamers through the deeper undercut bends, some caddis, hopper-dropper, and got nothing. I really couldn’t figure it out. Had I not landed that nice fish early on I would have doubted the existance of fish at all. It didn’t seem right. How could I not be getting fish in these money holes?

I continued upstream with the same results. After awhile I got a couple little cutties to take. One of them came up while I was talking with my wife on my cell. I missed the take and tricked him into coming up again. Sorry, lady, I gotta go and reel this fish in. A little bit later I came up on a stretch with a long undercut bank. It ran straight for about thirty or forty yards. I thought to myself, “Ok, this is it now.” I couldn’t imagine fishing this whole bank and not getting a fish to come up. I started working it inch by inch, making sure that I got the drift I wanted over each inch of that bank. Finally, about two-thirds of the way through the bank I finally got a take. Finally! He shot downstream. I chased it. I finally got him in and it was another 18-inch fish. One of the lightest and pretties browns I’d ever caught. 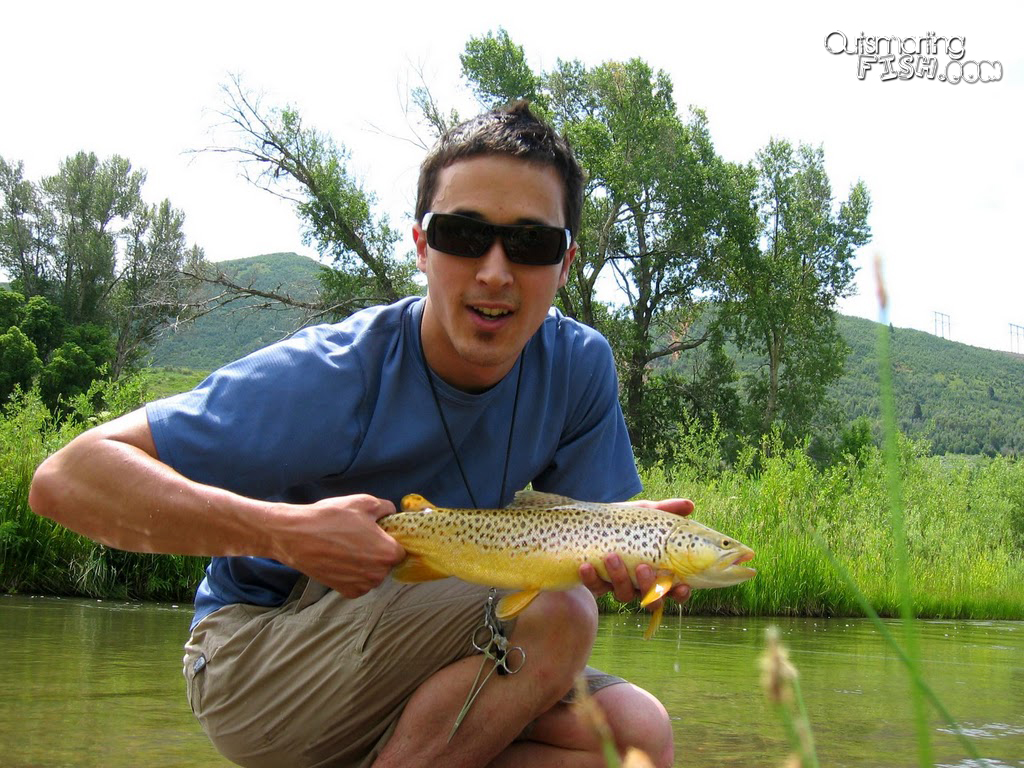 I ended up throwing in downstream from where I started on the way back to the car. I got into another decent fish. A thick very sparsley spotted 16incher. It was a nice fish to end an interesting day. I covered some great water

and didn’t get into as many fish as I expected but they mostly really good fish considering the size of the water. Another great day of hopper fishing on some new water.