The task seemed daunting at times, almost impossible to tell you the truth. It’s the hunt, the challenge, the reward, those rare times when things just come together. I am talking about hunting trophy brown trout. Unfortunately, there’s no foolproof rulebook on how to catch big brown trout.

15 days. 15 days and/or nights spent chasing the elusive monster browns that reside in certain western waters. The research started by scouring the internet in order to find places to target these browns and later consisted of calling friends, stopping by fly shops and ultimately scouting water. Throughout the summer I had been traveling across the western states working, going to weddings/ other family events, and of course fishing. Any chance to travel always means an excuse to bring a fly rod and test new waters. This time the destinations would all be centered around targeting the biggest, baddest browns my research produced. Travels would include Utah, Idaho, and several places in Montana – each with trophy brown trout water near (enough) the summer’s events and destinations to merit a day of fishing. Calls were made to friends and family to meet up with me when possible and other trips were made solo when a fishing buddy couldn’t be talked into spending a day prospecting for one fish, Old Leroy Brown.

As summer wore on there was nothing to show for the effort that had been put in. It seemed that I hadn’t come any closer to figuring out how to catch big brown trout. There had been close calls but none such trophy brought to hand. It was frustrating to see nothing come of so many hard days of fishing. For example, on a day of sight fishing, there were 8 browns over 24″ spotted and despite hours of casting nothing materialized. On another trip, Nate drove through the night to meet up with me and fish for 2 days on a stillwater that has produced some huge browns in the past. We walked for miles fishing to the most spooky pre-spawn browns I have ever seen. Our guess that the fish would be starting to patrol the shore was spot on but only one brown showed a casual interest in our flies. On yet another trip I put in 3 nights of mice/ streamer fishing without a single bite!

Needless to say discouragement was sinking in, doubts about my sanity and whether or not a fish (that was beginning to seem mythical) would ever be caught began to creep into the mind. The thing is, quitting was never an option. Stubbornness to accomplish the mission was the only real ending that could be acceptable. I remember working a weed bed  and seeing a brown clearly over 24″ appear out of nowhere to engulf my streamer then erratically swimming past only to feel the line go limp after the trophy’s first burst of speed. These moments threaten to break that stubborn spirit. The list goes on; waves that could capsize a 16 foot fishing boat, strikes that come between strips as your hand releases the line, blistering hot sun that breaks through the clouds on a cool fall day sending browns blitzing for cover. Sight fishing from early morning until evening to a brown estimated at 26-28″ that refused to leave his precious stretch of shore line or howling wind that kicks up just when you spot the biggest fish of the day as you are preparing to get into position to cast. One evening as the sun started to drop below the mounains I watched as twice on 2 sequential casts an absolute brute brown made atemps to eat my streamer with no more than 5 feet of line left in the retrieve and ended when I wiffed the hookset. On another occasion, any on-lookers would have thought I had lost my mind after I came unbuttoned and screamed at fish, threw rocks in the water and chucked my net into the bushes. Sometimes everything seems to work against you, but sometimes, just sometimes things come together. 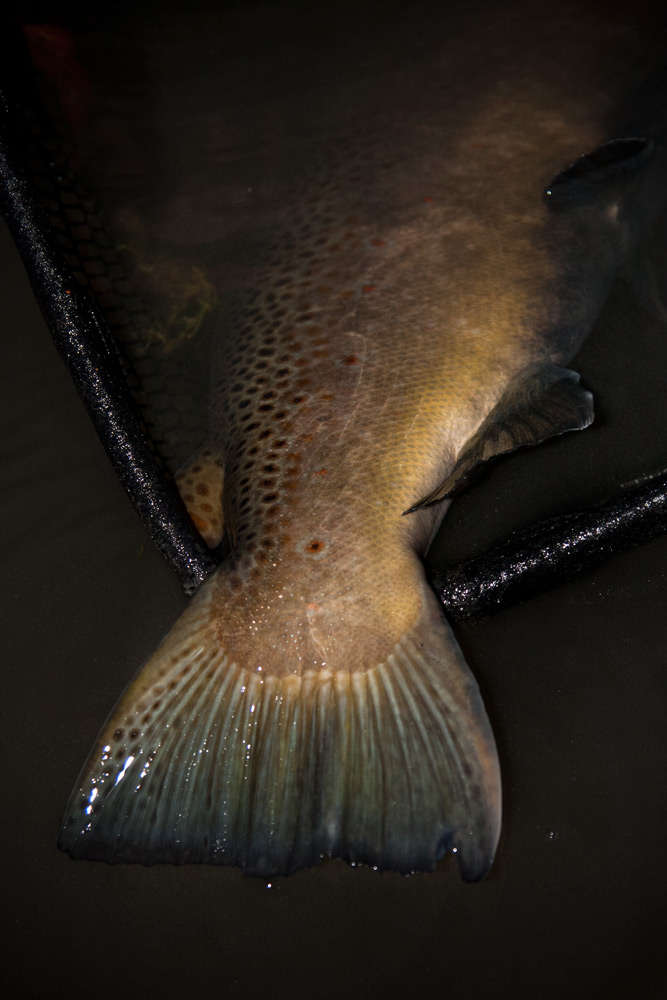 My alarm sounded – probably the most annoying sound in the world! I dozed off for a few more minutes and then crawled out of bed and dressed for the freezing cold darkness that awaited me.  The early morning darkness was spent getting into prime position and warming my hands that were losing feeling. Finally, once light appeared on the horizon I was just beginning to cast. The first cast further froze my fingers as my fly line wet my already cold hands. The thought came to mind, can’t keep this up for too long! As the streamer seemed to struggle toward the shore a dark shape suddenly came into view, it was mostly dark still but the light on the horizon gave just enough light to watch as a BIG brown casually closed in and ate the feathery offering. Fish on! Watching this fish throw water in everywhere as it thrashed on the surface suddenly made the cold morning worth it. Once it was safely in the net a small victory dance may or may not have occurred as shouts of celebration echoed through the still morning air. Mission accomplished!!! A quick tape of the fish and a few photos and he was on his way. I was done for the day, completely content with my 2 casts! Proof that on those rare occassions things play out better than you could have dreamed. 29 inches and thick to the tail, my personal best brown by almost 2 inches! The entire process was humbling and reminds me to appreciate every solid trout I catch. I think I also realized the secret of how to catch big brown trout. Persistance. 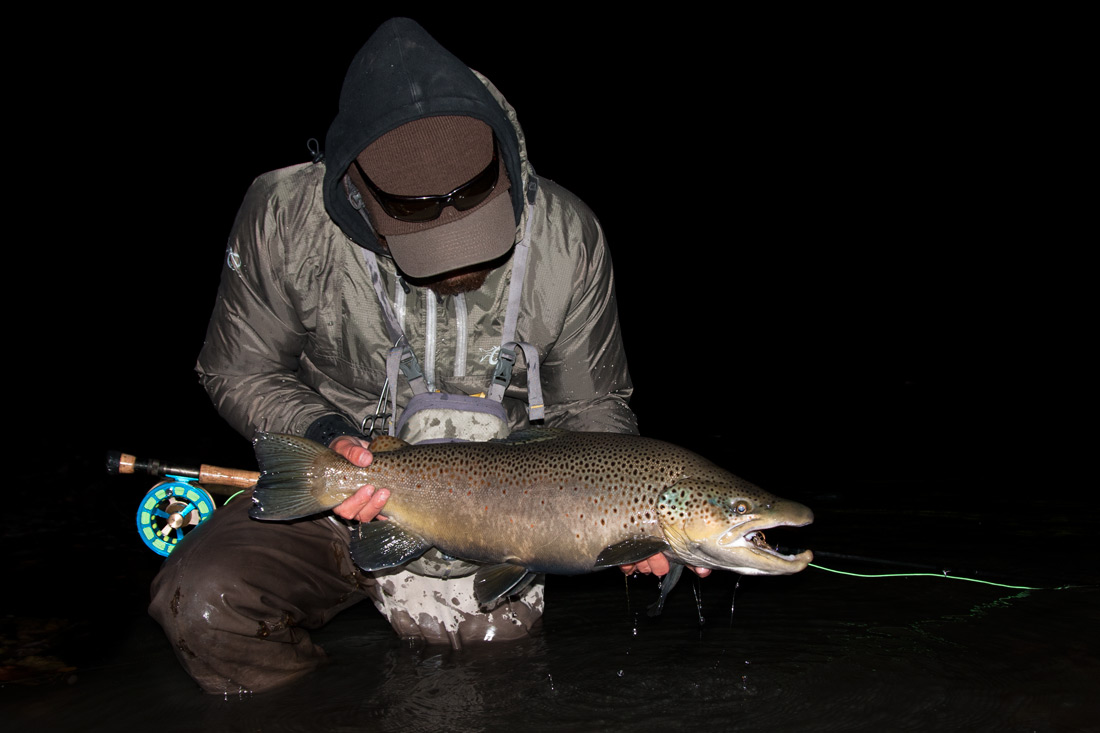 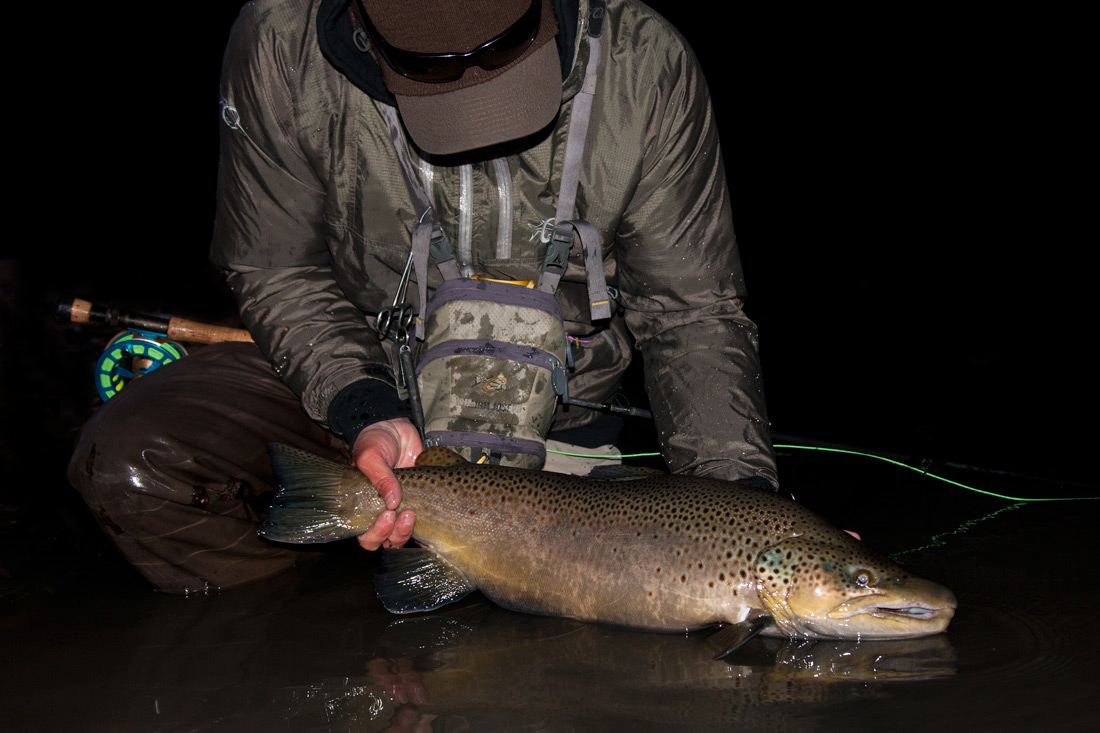 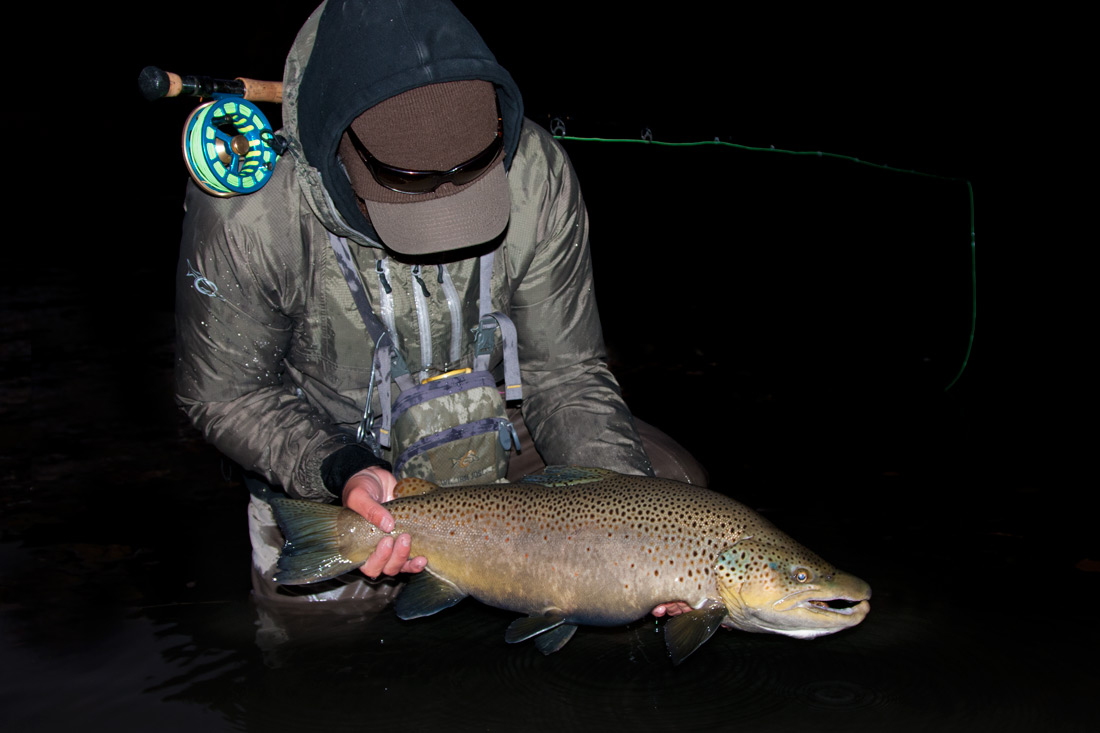