Already this year we’d put some time into fishing this challenging water. Derek and I are addicted. I haven’t spent too much time fishing stillwater and we’re determined to figure out all the ins and outs and ultimately get to witness the ultra pigs that this water holds. After running it through the chain of command a good friend of mine, Matt, drove up to join us for some spring fishing.

We met up at the usual spot at the usual time. We were all amped for an epic day. We planned on fishing all day. We talked fish the entire drive out and arrived as it was rapidly getting lighter. The weather wasn’t bad as we rolled up, but we knew we’d be in for some rain and junk. Either way it didn’t matter. It was gonna be an epic day with two really good friends. Matt just started his fly fishing addiction a few months prior and has been frequently fishing some of the great skinny waters that southern Utah has to offer. After his short time fishing he was completely stoked to try and chase some pigs. He asked advice on fly choice and we all rigged up some streamers. It wasn’t long before Derek got bent. As the sky lightened none of us had much luck as we eagerly stripped our bugs.

Derek and I have been putting in a lot of time into trying to figure out this tough water. I switched over to a rig that we had found to be quite productive. I walked over and scoped a bankline that I like to see a nice male Colorado Cutthroat cruising less than a foot off the bank in about eight inches of water. I’d seen this fish before and gotten snubbed. I got into position and made my cast about six feet in front of him as he slowly cruised away from me. I made a few short stips and the fish spotted the chunkly little morsel that I had tied up especially for him and his fat buddies. He quickened his cruise and I felt my line stop. I set the hook and he took off. Yes! It was gonna be a good day. As I got him closer I saw just how beautiful he was. One of the fish I’d been waiting for. 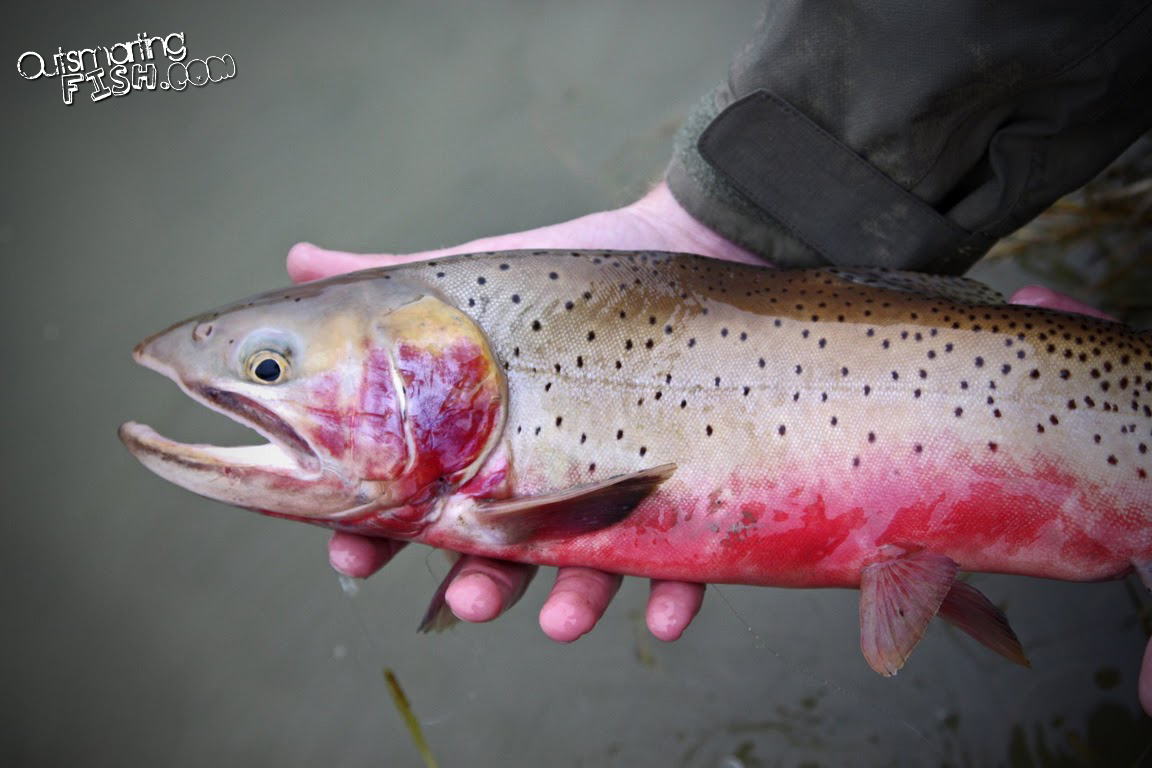 I gave Matt a chunky morsels and we worked the spot together. A few minutes went by and I was interupted by a somewhat confused Matt. “I…I got one?!” The water erupted and as quickly as it began it was over. Matt threw his rod down and held back the eff bombs. I completely empathized that feeling of getting this close to getting what you’ve been dreaming about. He got busted off. I was bummed. I was really excited for him to get his first tiger and get his first big fish. It wasn’t long before I heard him yell to me. Yes! It was still early and we all had the skunk off our backs. Now it was time to get to work. 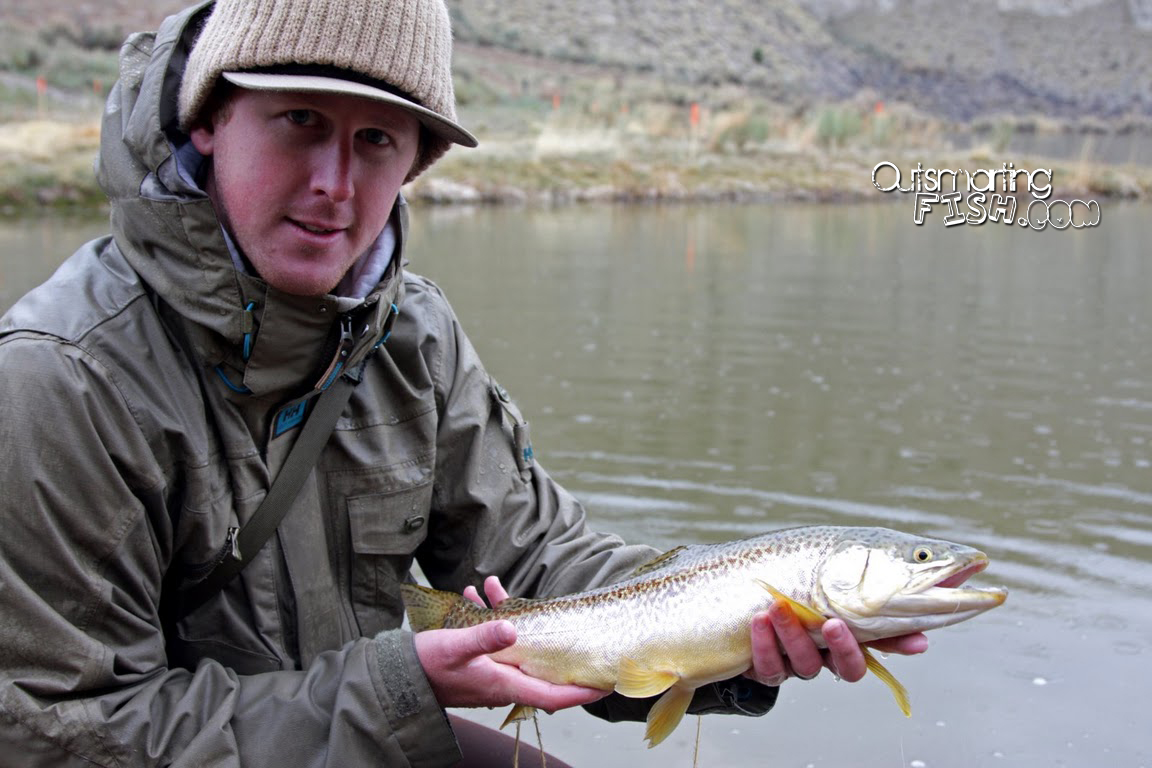 It was Derek’s turn. Derek always comes through. We got a yell from a ways down the bank. A fat lady over two feet with a hunchback. The fishing continued to be pretty sweet and time actually seemed to go slower than usual. I got excited everytime I looked at my watch to see that the day was already so radical and we still got over ten hours of fishing left!

Derek told us he was going to go fish another part of the lake. After a while a shrill, girl-like scream broke the silence telling us to come over. As we approached I saw in his net one of the biggest trout I’d ever laid eyes on (the last biggest fish I’d ever seen was one he caught last fall). He’d done it again. We were so stoked. We high-fived and just stared at the beautiful lady he had coaxed into his net. I shot some photos and we sent her on her way to be hooked by us again next year when she’s even bigger. It was only 10am and the day had already been epic. 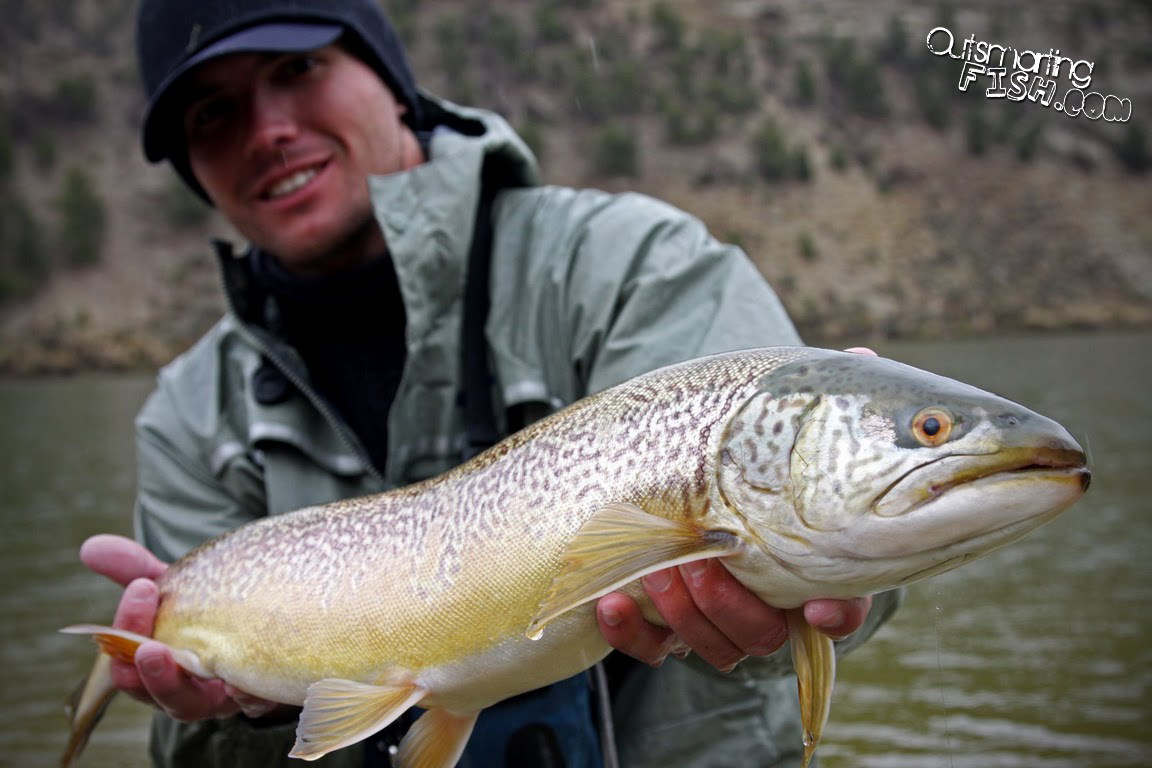 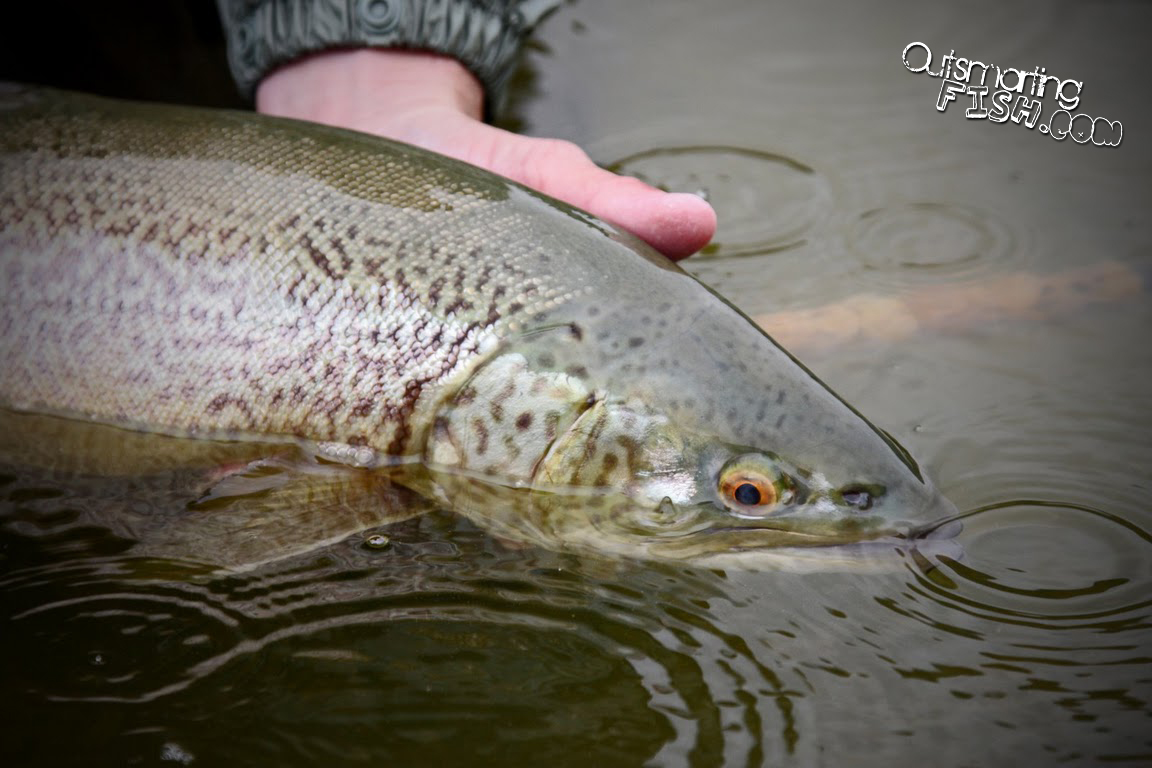 We fished all our favorite spots and the day continued on with some doubles, fish pulling line off our reels, and a good mix of tigers and cutts. I got a good portion of the cutts, which was fitting as I’ve been dubbed the “cuttie slayer.” 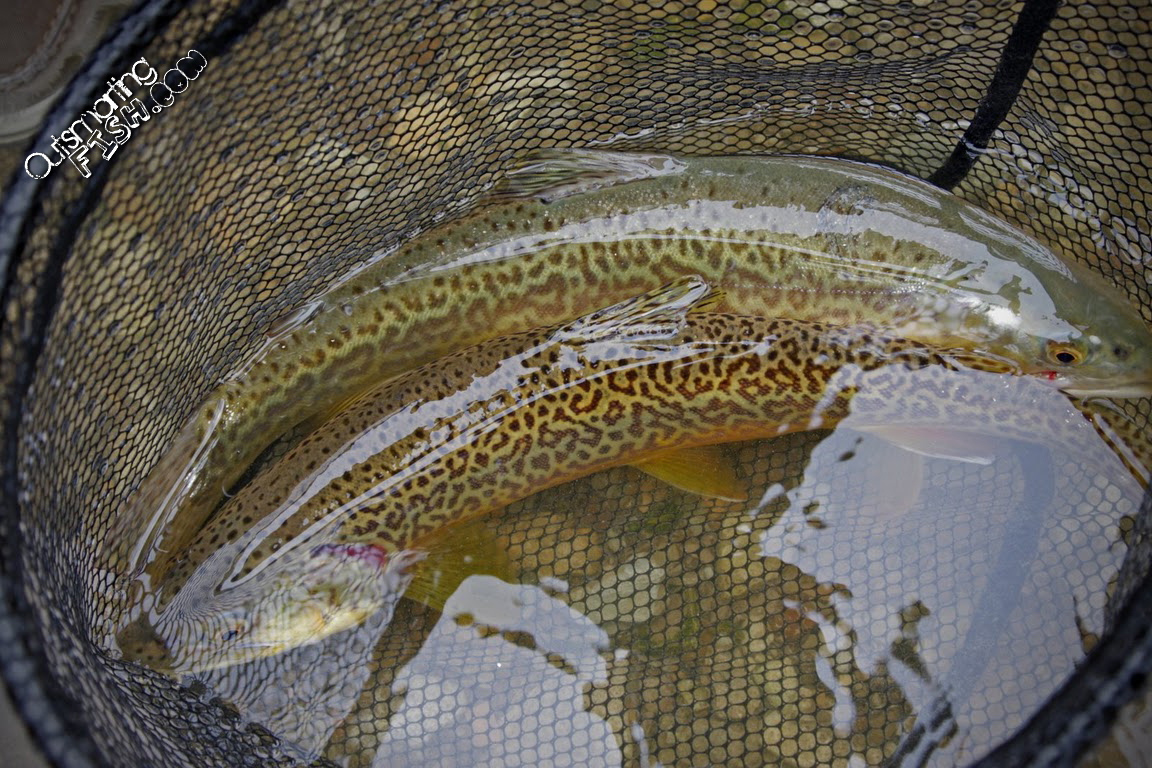 As our time grew short we stalked a shallow bay that had some nice tigers cruising and munching away. Matt and I were still seeking our big fish of the day. I kept my double rig on and cast into the wind that is our frequent companion at this lake. After getting denied by some fish I decided that the two flies probably weren’t getting the action that I was looking for in this situation and I clipped of my bottom fly. I waited for the big male that I had been eyeballing to come back. He did. He slowly cruised along, occassionaly going tail up to much some snacks off the bottom. I made a cast and a couple short strips. I dropped my fly right next to him. Seconds later he went tail up and I thought, “that’s gotta be me!” I set the hook. He bolted off. Booya! He was a strong fish. Slow, strong pulls.  I soaked in every moment of the fight. As I got him in he was bigger than I thought as I had been stalking him. A beautiful and well propotioned male.  An overall awesome fish. 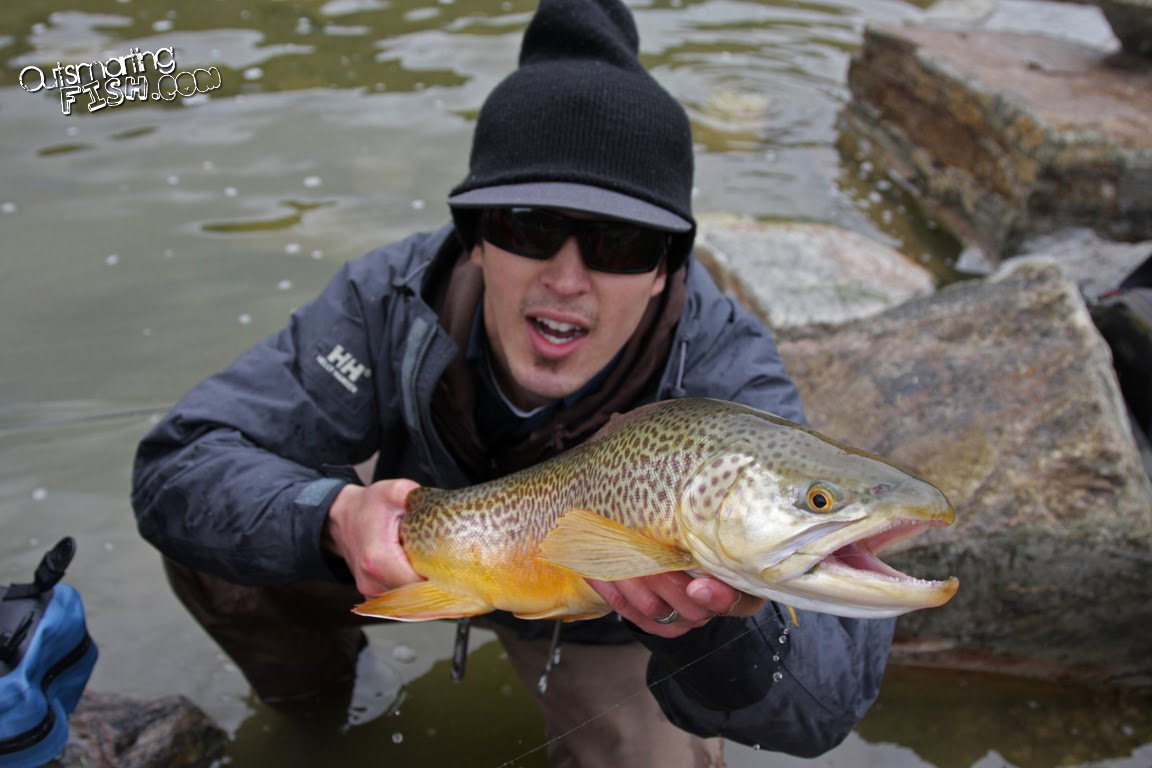 Matt’s came a little later just before we ended our day. He had switched rigs and was fishing a white streamer. He had an amazing follow as a nice tiger followed his bug almost the full length of his cast – a mighty fine cast for a guy that’s only been at it for four months. He recasted and this time Matt watched as the tiger followed and absolutely slammed his streamer. He landed his biggest fish to date. A gorgeous male with a large kype. Well done, Matt. 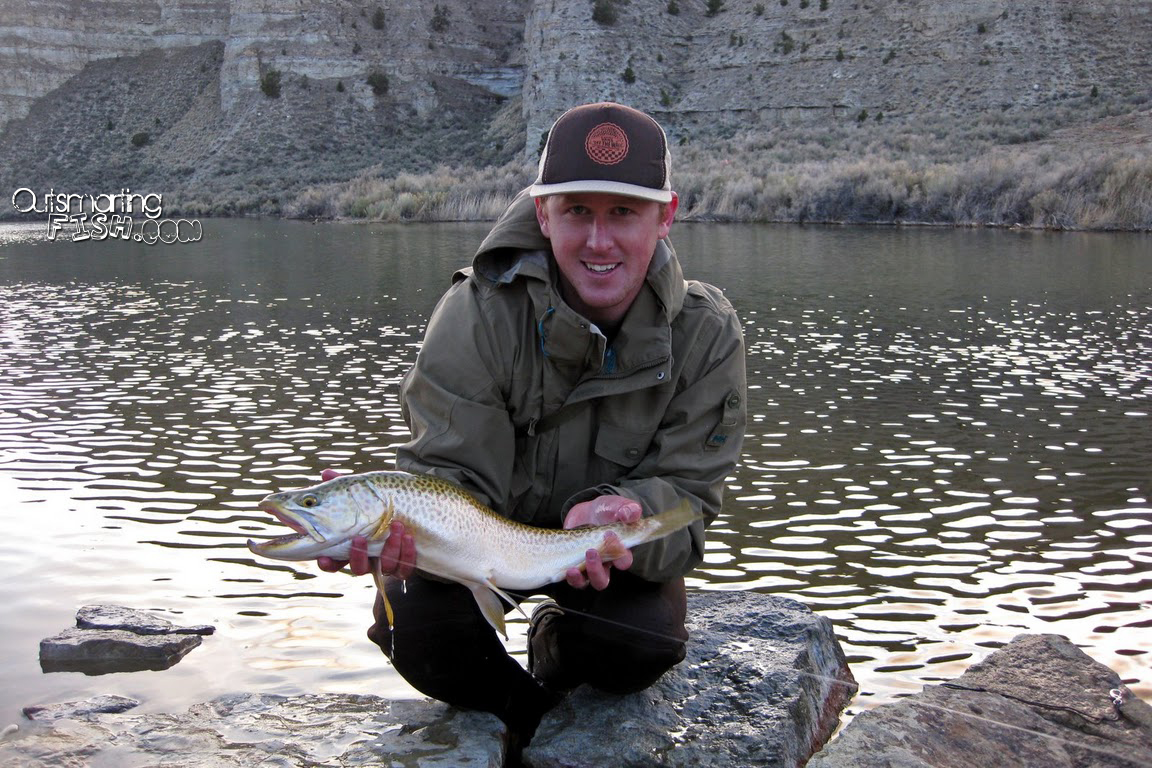 I hate leaving this place. Even though this trip couldn’t have been any better, I still had the hardest time loading up and heading for home. A handful of cars had come and gone throughout the day. Most of them seemed to experience the tougher side of this little lake, I think. We came and gave her 14 hours of lovin’ and we were stoked. Thoughts of this trip will linger and frequent my mind for years to come as it was an epic day with great friends and great fish. Can’t wait to do it again in a couple weeks! 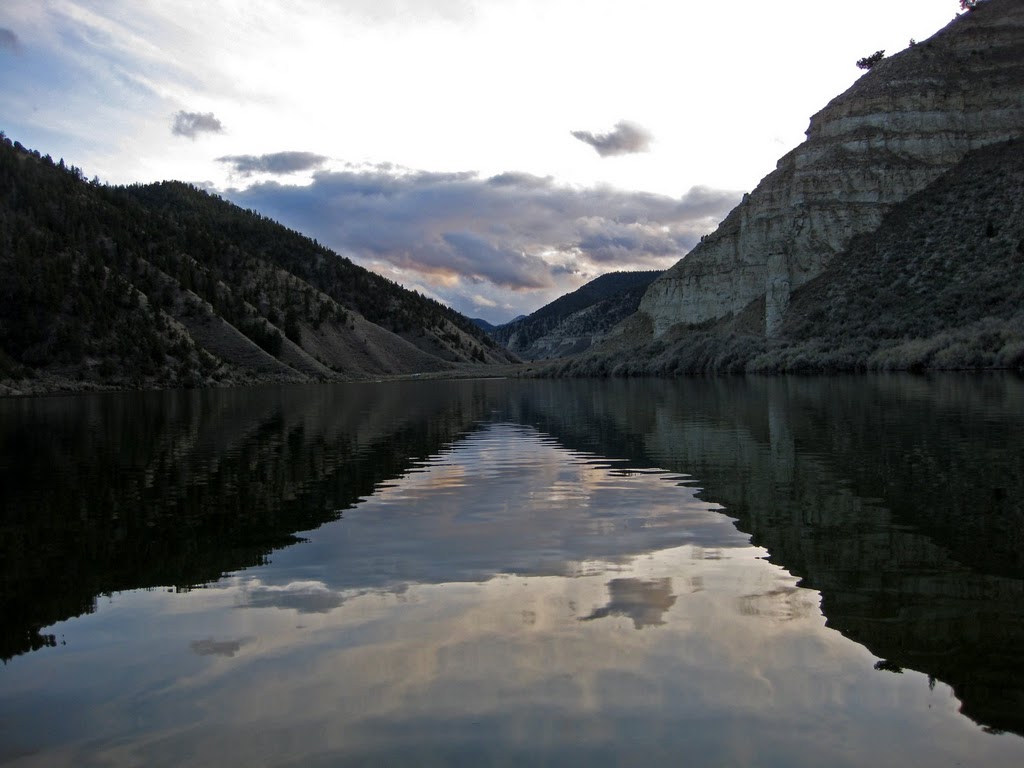