A year ago I heard about the idea of french nymphing for steelhead from a buddy, Gilbert Rowley. You are probably thinking the same thing I thought… “YOU’RE PSYCHOTIC!” However, having partaken of the goodness that frenching has to offer, I ultimately concluded that it could definitely produce some steel… For those of you who aren’t familiar with french nymphing, it is basically the idea of using a really long leader (21-25′), no added weight aside from HEAVY tungsten nymphs, dead drifts, and no attached indicator. Instead, a mono “sighter” of pink, chartreuse, and yellow monofilament built right into the leader aids in strike detection. It takes some practice to cast the thing, but in the end it can produce SILLY results. Anyways, I’ll save detailed euro theory for another day….back to the story.

The absorbing thought of steelhead has always haunted me. You could simply say that it has been on my mind, but that would be understated. It has consumed my thoughts this past year mostly due to a warm spell that caused chocolate water spoiling my first ever trip last year. I simply couldn’t get the thought of crazy red gill plates and screaming reels off my mind.
Spring neared as did the steelhead. Myself and a couple buddies (Bart and Gil) decided to put euro nymphing to the ultimate test. The alarm erupted at 2:30, but I must admit, I was already awake. We made the drive and got on the river at about 8:30 in the morning. Five minutes later, Gilbert hooked into the first fish…a decent hen. I thought to myself, “That easy huh?” We continued to fish throughout the day when I started to feel just what I had feared… Steelheader Syndrome! This perplexing disease causes anglers to begin asking themselves dumb questions and making idiotic comments like, “Are there even fish in this river?” and “I should just take a nap” or, my very favorite, “The next rock I snag, I’m gonna fight it like it’s a steelhead!” ………….. Hours upon hours went by without as much as a nibble. Mind games and statistics…….. statistics and mind games.

The sun dipped behind the mountains and we kept pounding the river. At about 7:45, I was fishing a seam where a smaller trib entered the big water. I snagged the bottom right under my feet and began to slowly lift the rod…………you guessed it……up came the dark silhouette of steel. I didn’t have any more “lift” to set the hook and as soon as he felt the resistance he shook twice and was off, racing back into the white water…………. Words do not describe. That’s all I have to say about that…….

I was, however, back on my A-game. Within a few casts my sighter stopped…. check…… set….. zzzzzzzzzZZZZZZZZZZZZZZZZZZZZZZZZ! FISH ON! The fight was fantastic, the pull was surreal, and before I knew it, I was holding a 28” buck with colors to match! 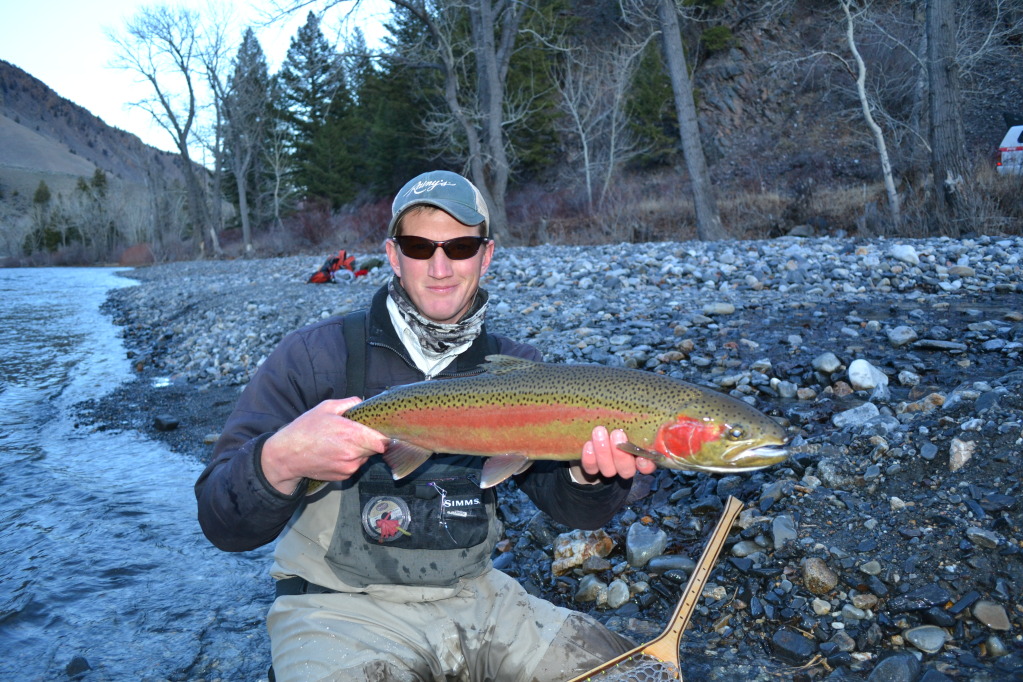 The fishing improved as increased numbers of fish moved upstream over the next couple days. We each caught a handful of steel. After multiple 200+ yd down river sprints and a broken net, we sat quietly in a burger dive in Challis, smiling smugly and marinating in triumph.