Back on the road again, the first leg of the week long fishing adventure had concluded. More than content to have caught an amazing fish, the rest of that night’s drive passed quickly. It was about 6 hours in total to meet up with the rest of the crew and drive to our next destination to begin the second leg of the trip. We had long since talked of doing a multiple day trip into one of our favorite lakes, yet had never made it happen. Finally after years of talking about it the opportunity presented itself and we found ourselves hiking toward a brook trout paradise high in the mountains. 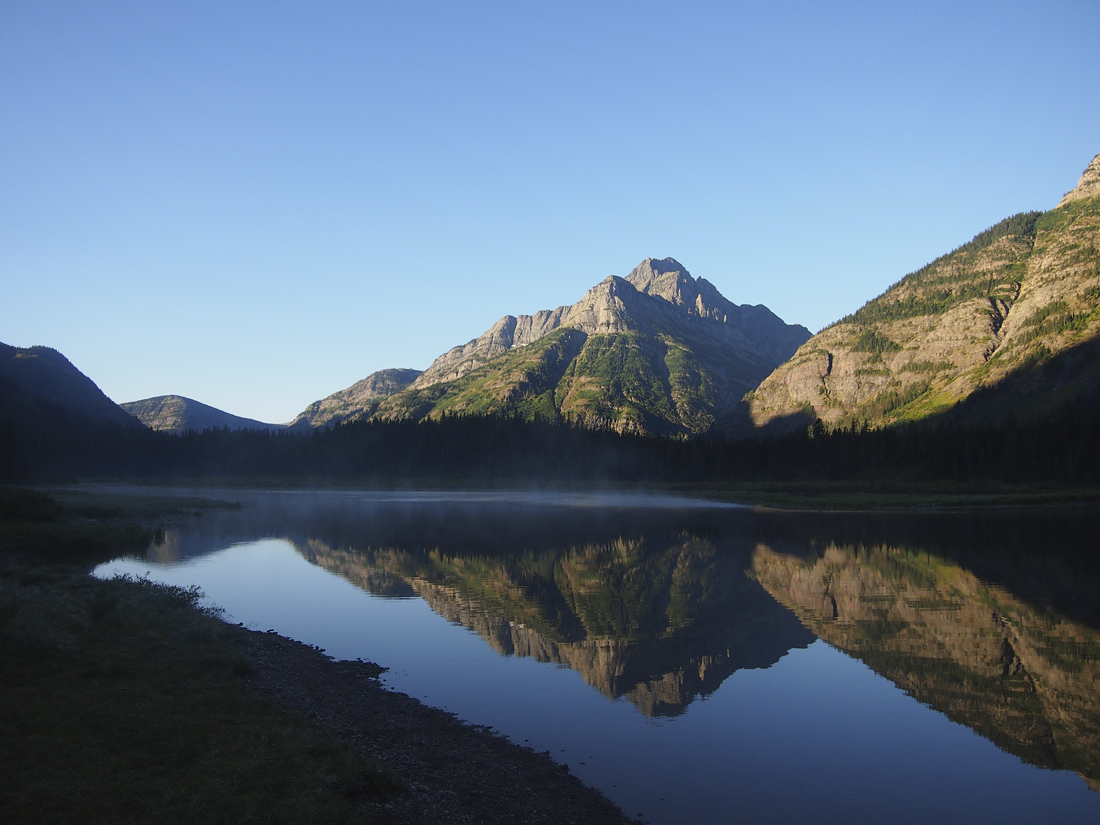 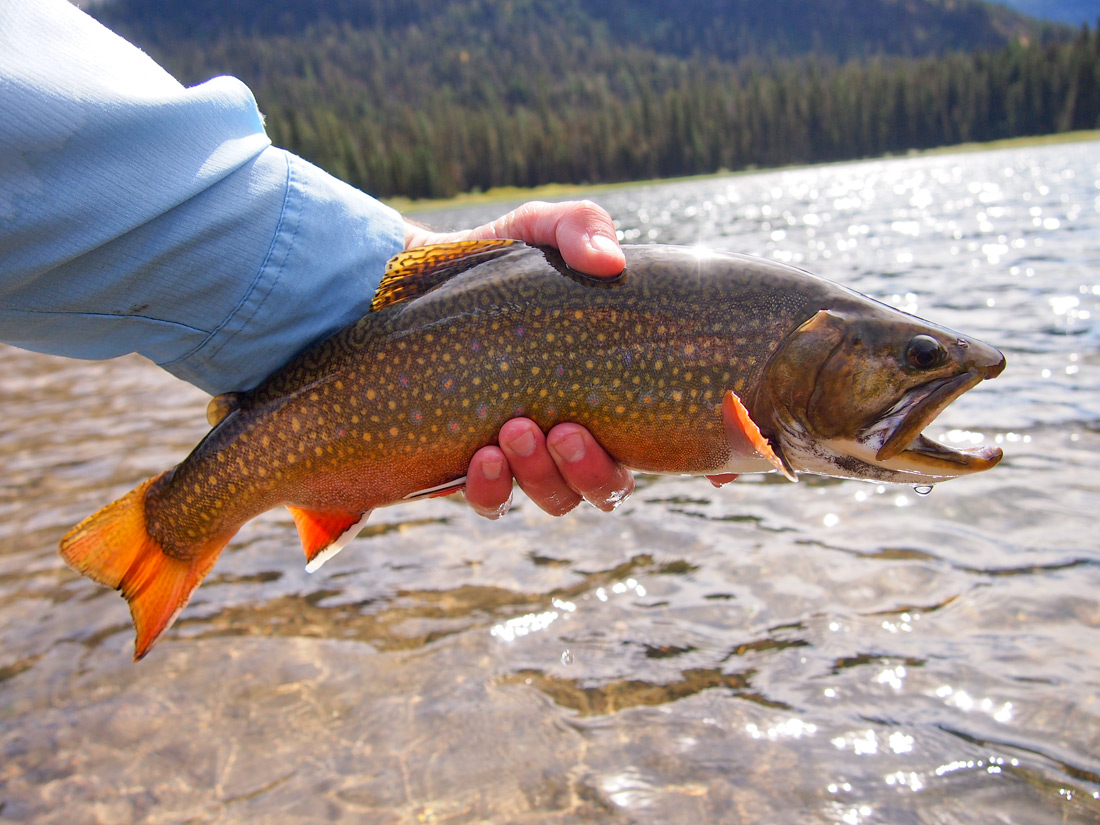 The trail seemed far longer than usual carrying a pack filled with gear for 4 days and 3 nights fishing. No matter, all the gear would allow for some long awaited exploration without feeling rushed. Setting up camp a few hours before sun set we relaxed, ate some dinner and enjoyed camp knowing we had plenty of time. The next morning the sun beaned brightly through the tent, breakfast cooked as the morning chill faded, then to work. The first day of fishing was honestly one of the best days of brook trout fishing I have ever experienced. It was sunny and warm for a September day and the fish were trying to prepare for winter by eating anything possible. As the sun sank toward the mountains a storm quickly rolled in and sent us hustling back to camp. Just in time! The air suddenly became heavy and cold as the rain began pouring down on us. 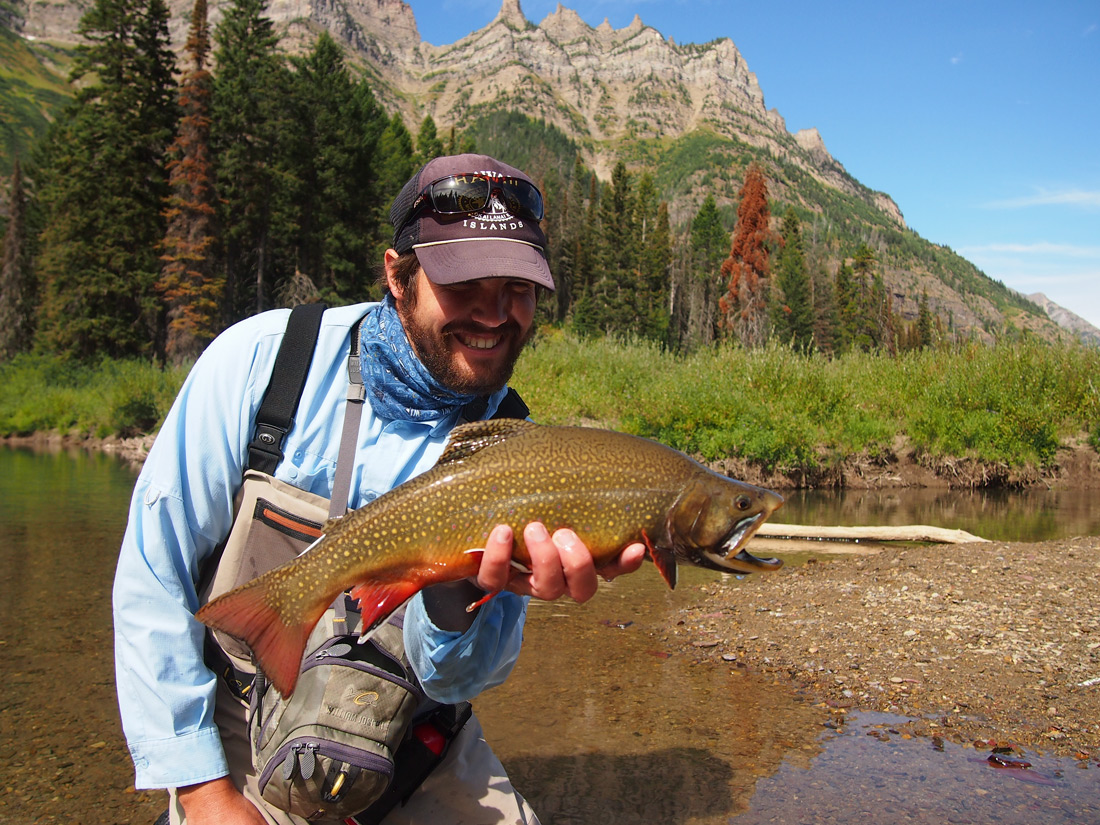 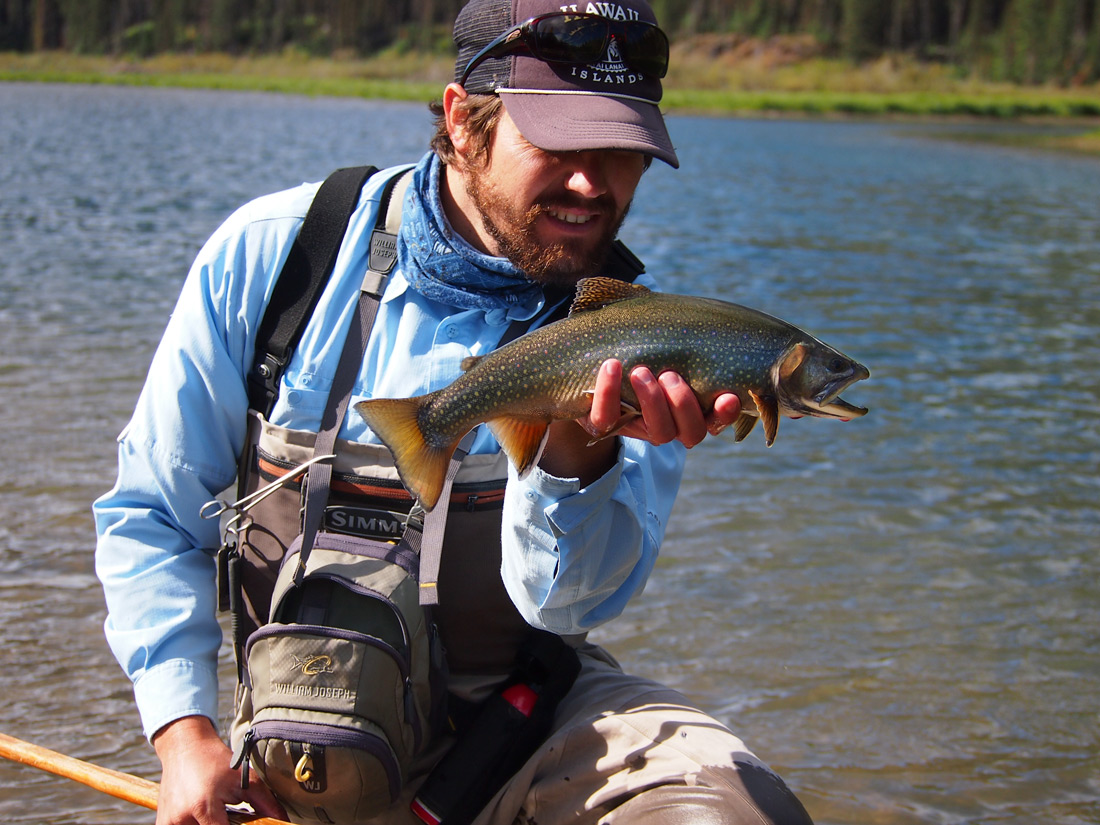 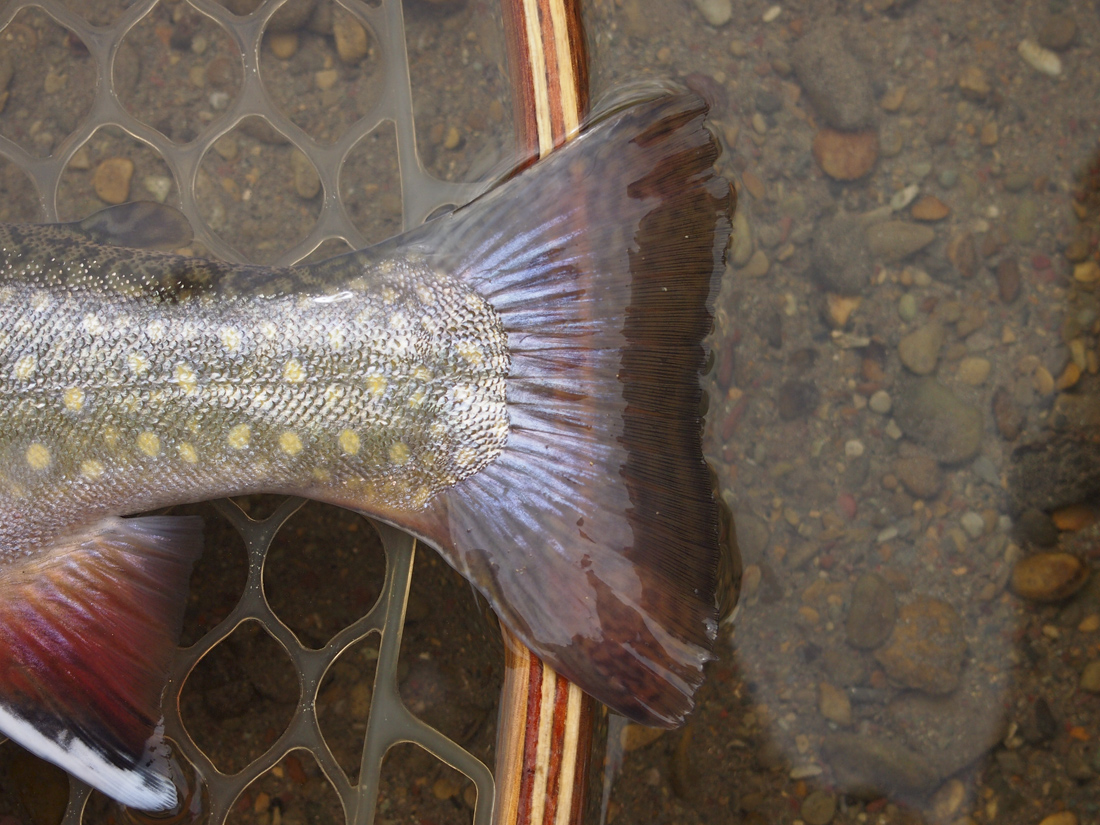 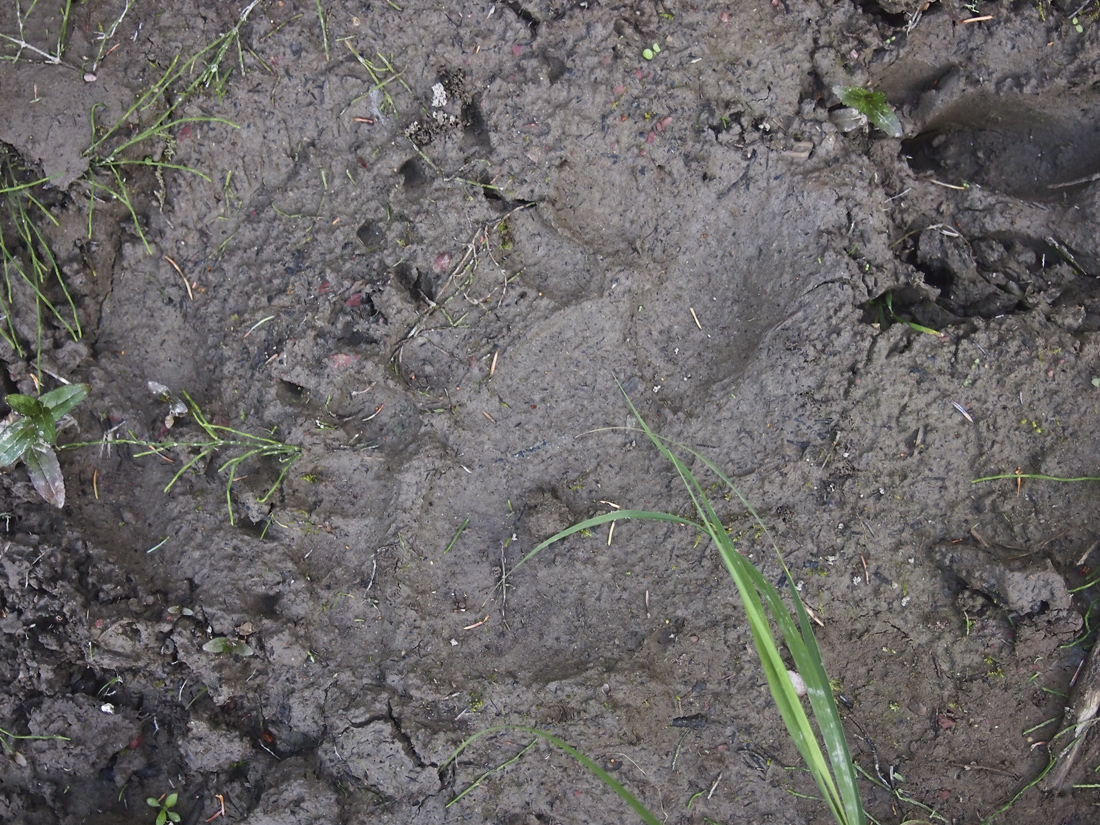 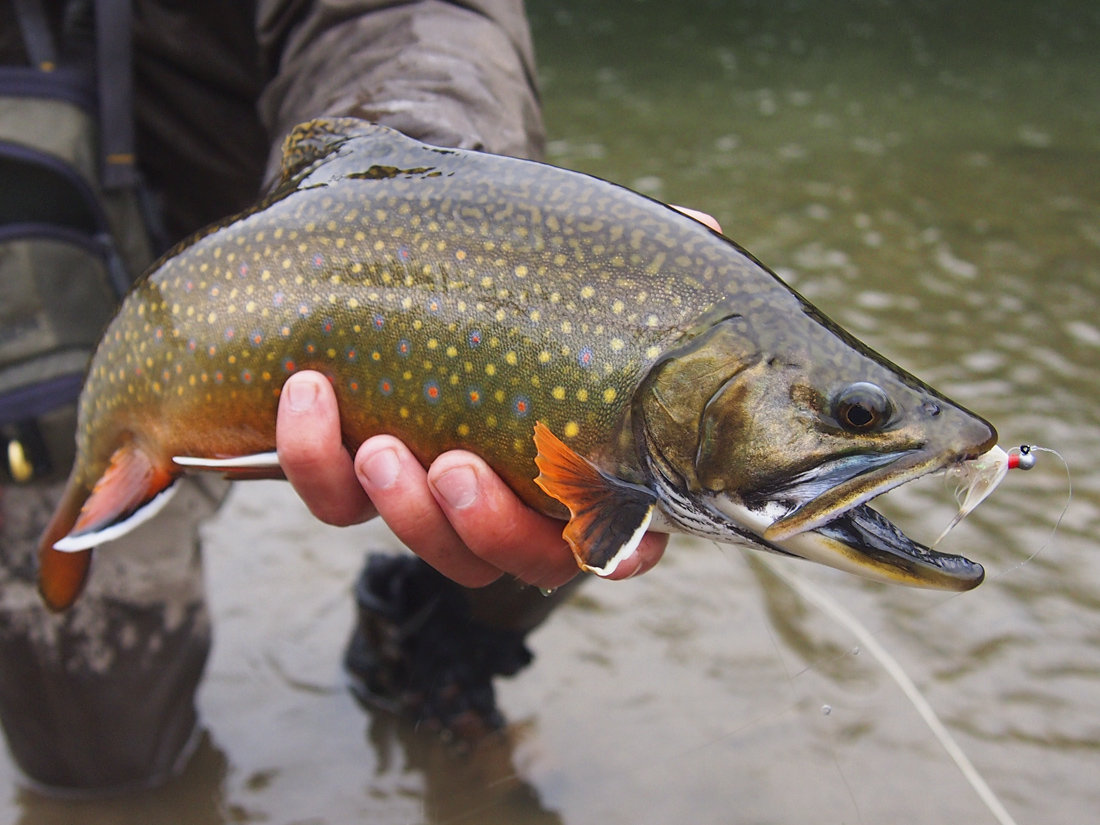 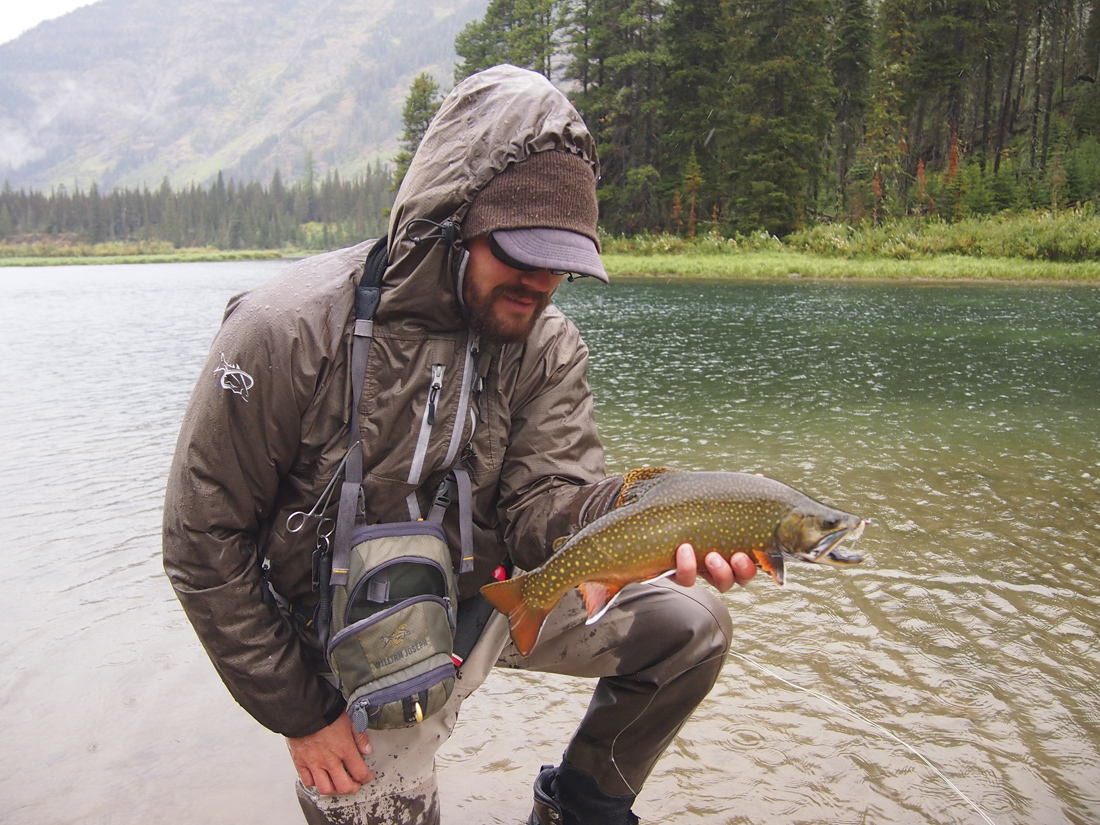 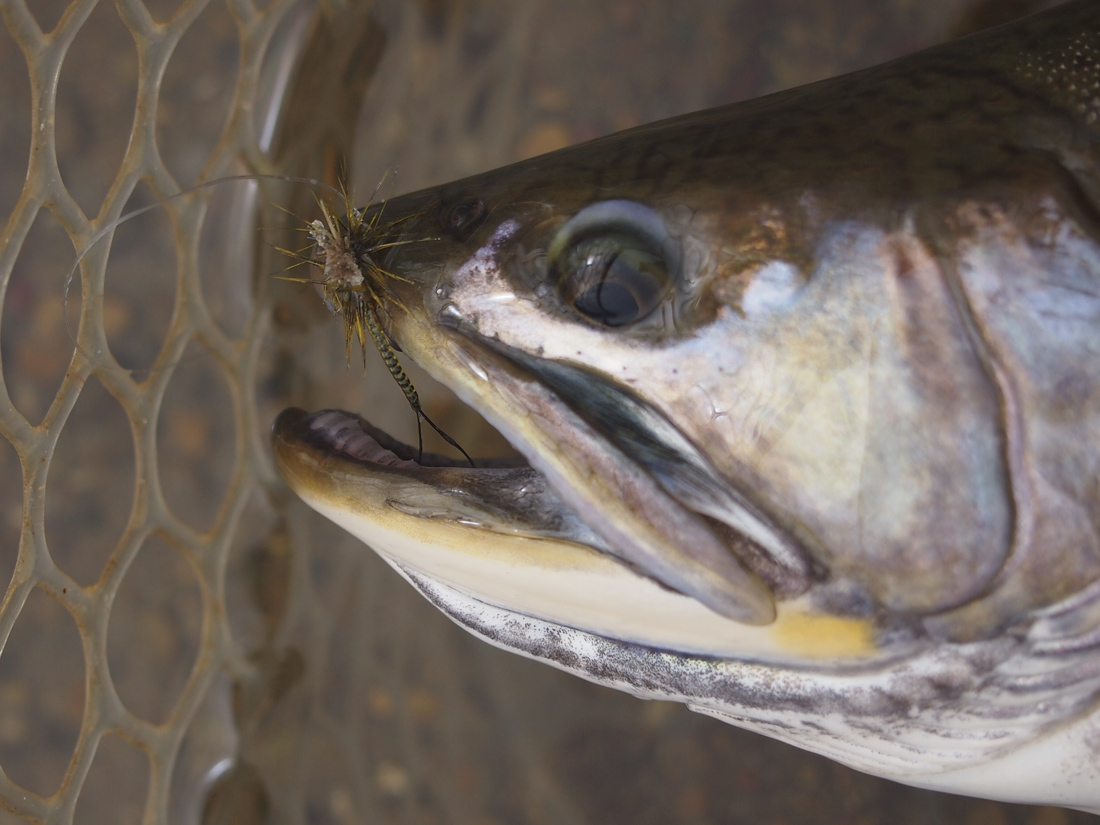 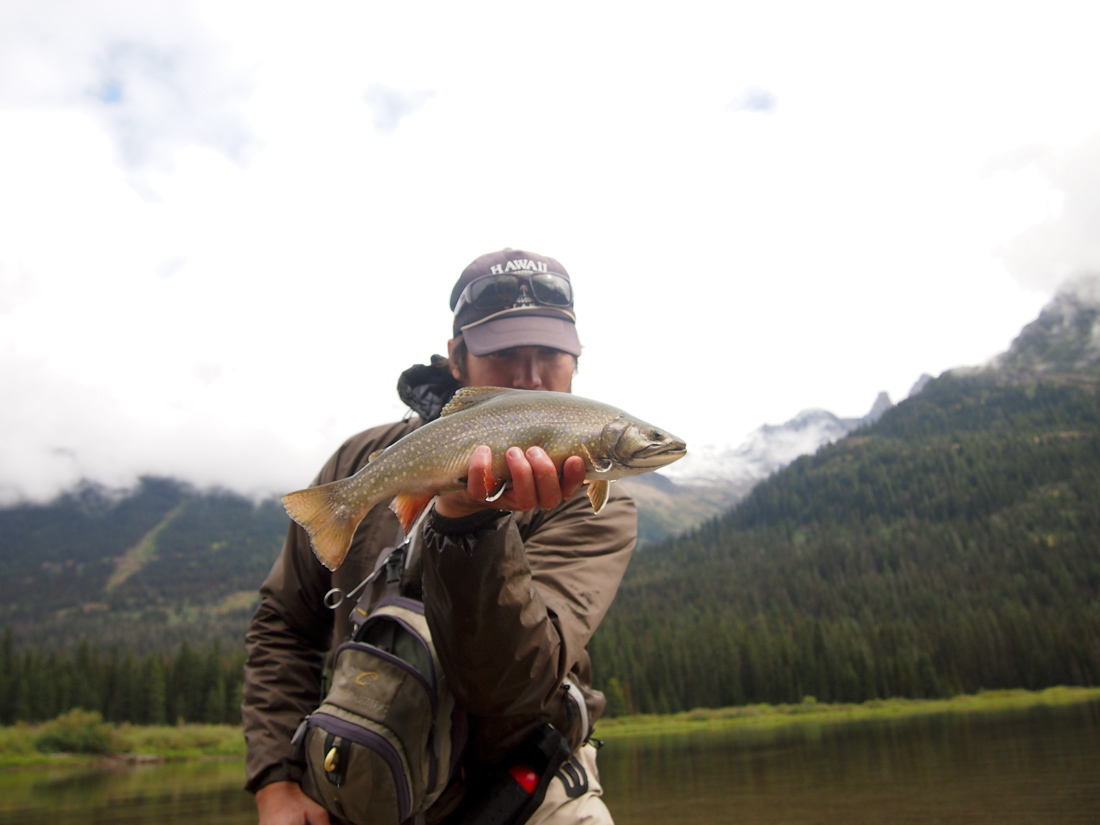 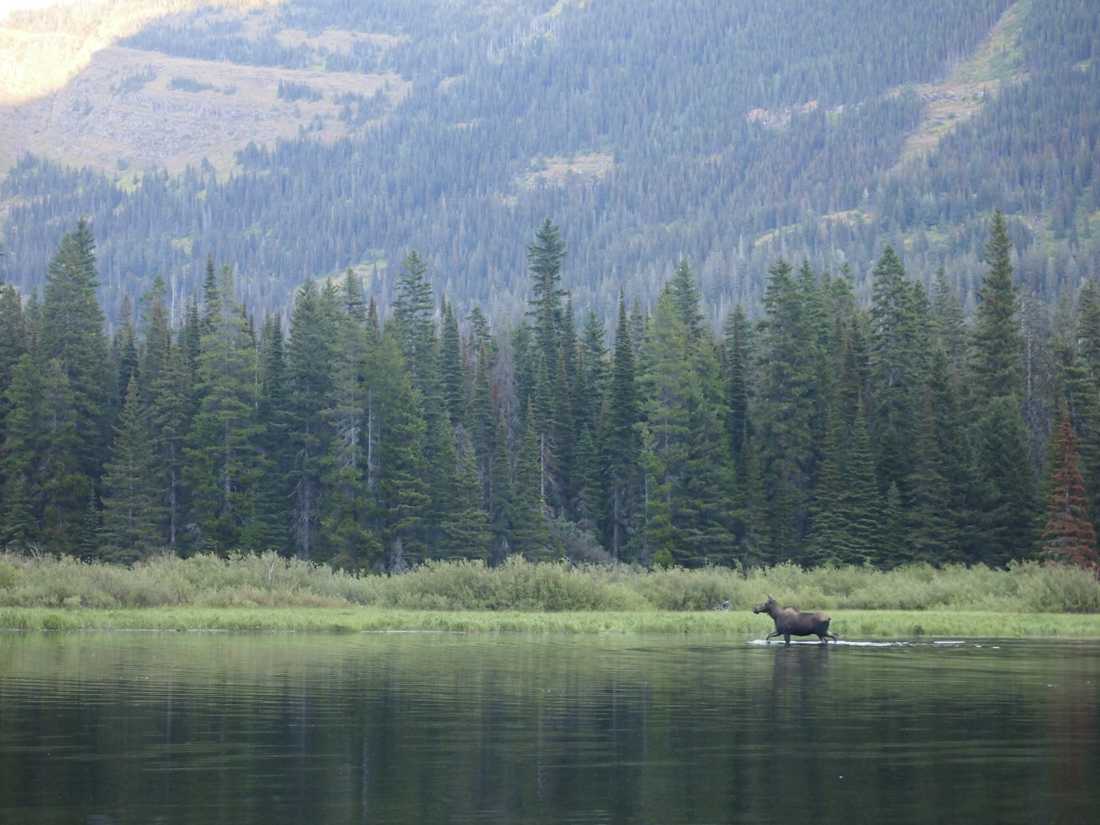 It rained all night long and as morning approached it was with a much different feel. No longer sunny and warm but cloudy and frozen. As the clouds lifted slightly snow could be seen just above camp. Luckily we had come prepared and suited up for a day of freezing weather. Walking around the lake brought a surprise, fresh grizzly tracks in the mud not far from camp. Fishing was slow, the weather seemed to have the fish incapacitated, laying up along the bottom just like brook trout love to do. The rain came and went through out the morning but began to clear in the afternoon. There was not even a breath of wind the day which set up an incredible event. As the afternoon sun would briefly break through the clouds, drakes began to hatch! I couldn’t believe it, one of our group had been fishing the lake for over 40 years and had never once seen a hatch occur. The fish still remained glued to the bottom for the most part but a few were taking advantage of the large insects fluttering on top of the lake’s perfectly calm surface. I did something unusual for me and quickly dug through my pack to find my box of dries, clipping off my streamer and to tie on a dry. It felt good to work a dry to the rising fish. It took a bit to catch a rising fish as there were not a lot eating but it was amazing seeing healthy brookies eat on top. The game was fun, cast out and wait until a riser would show itself then quickly place a cast in the area and hang on. One fish in particular was rising fairly consistently on the far side of a shallow section. In position and still 50 feet plus to cast. I lined up and made a cast, right where I hoped it would land! Almost instantly a head appeared and then disappeared with the dry. The hook set sounded like silk ripping as line peeled off the water and brought the fish to the surface tail slapping as if pretending to be a beaver. It was the largest brookie I had ever caught on a dry! As evening approached a cow moose came out from the bushes to graze in the lake. This was the beginning of the moose rut and we all made sure to watch for Bulls that would surely be in hot pursuit. During the rut a bull moose is the craziest, most dangerous animal in the woods. Although fishing was not as fast paced as the first day it was every bit as fun and rewarding. 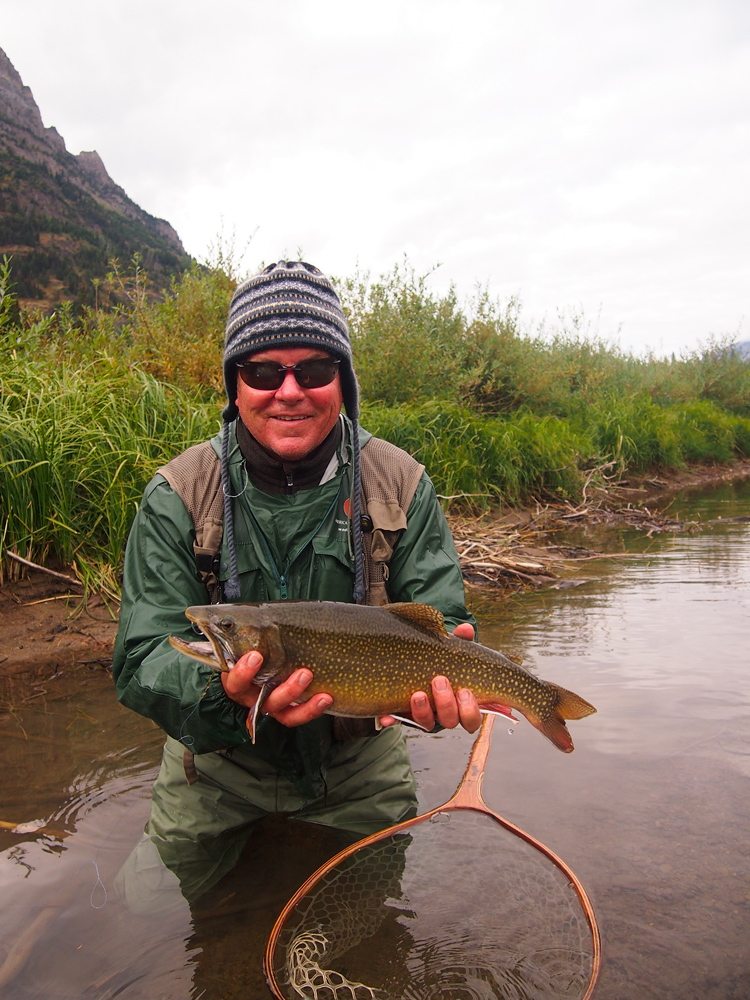 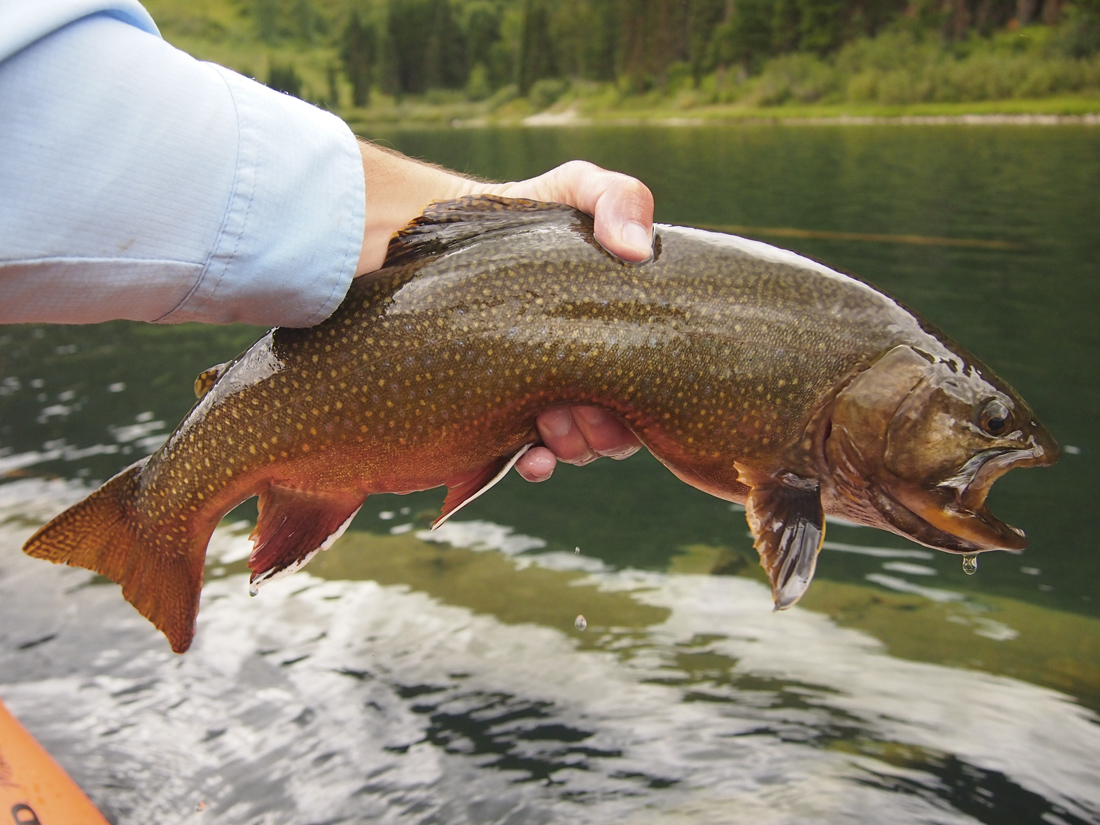 On our last morning we decided to fish the morning and then break camp to head out after lunch. The fishing was nothing special but we did manage to spot a wolverine. Unfortunately, it ducked into the bushes before I could snap a picture. On our way out we spotted one of the coolest things I have ever seen. A bear eating another bear. We talked to another group that said that both bears had been in the area and then in the morning the one was eating the other. It was one of the most incredible displays of nature imaginable. What a privilege to witness the harshness and beauty of mother nature first hand. 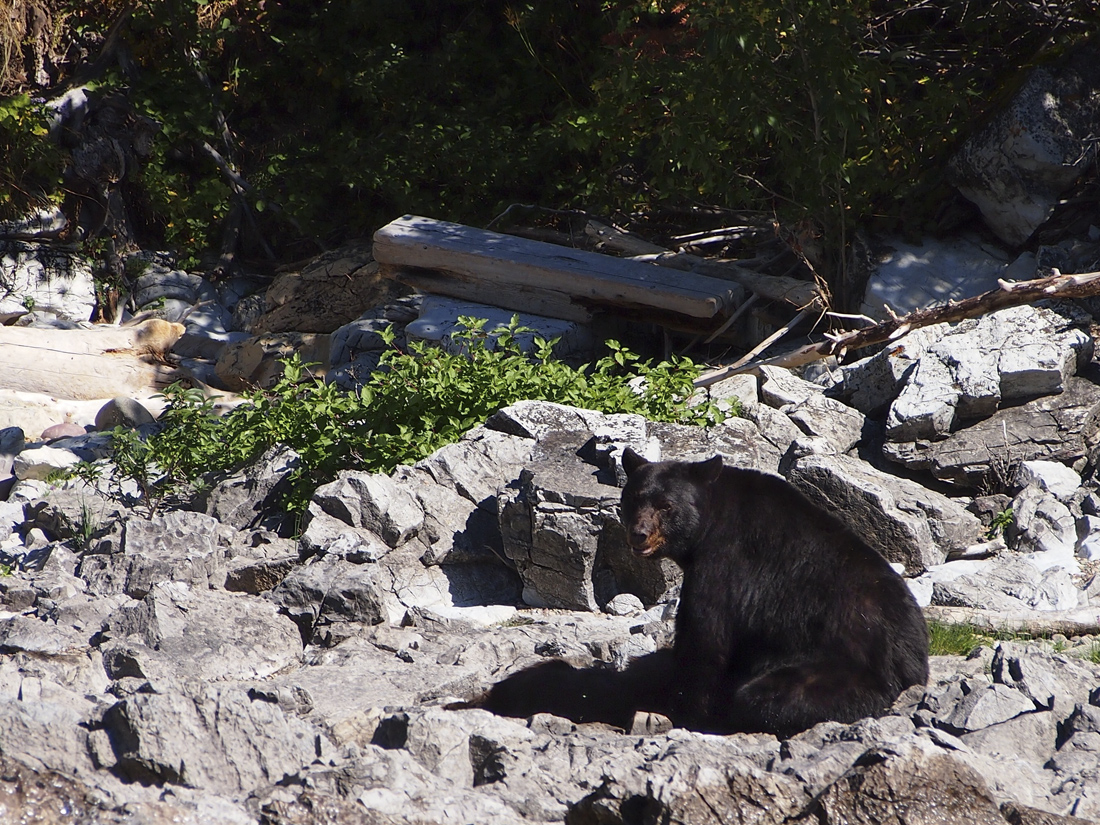 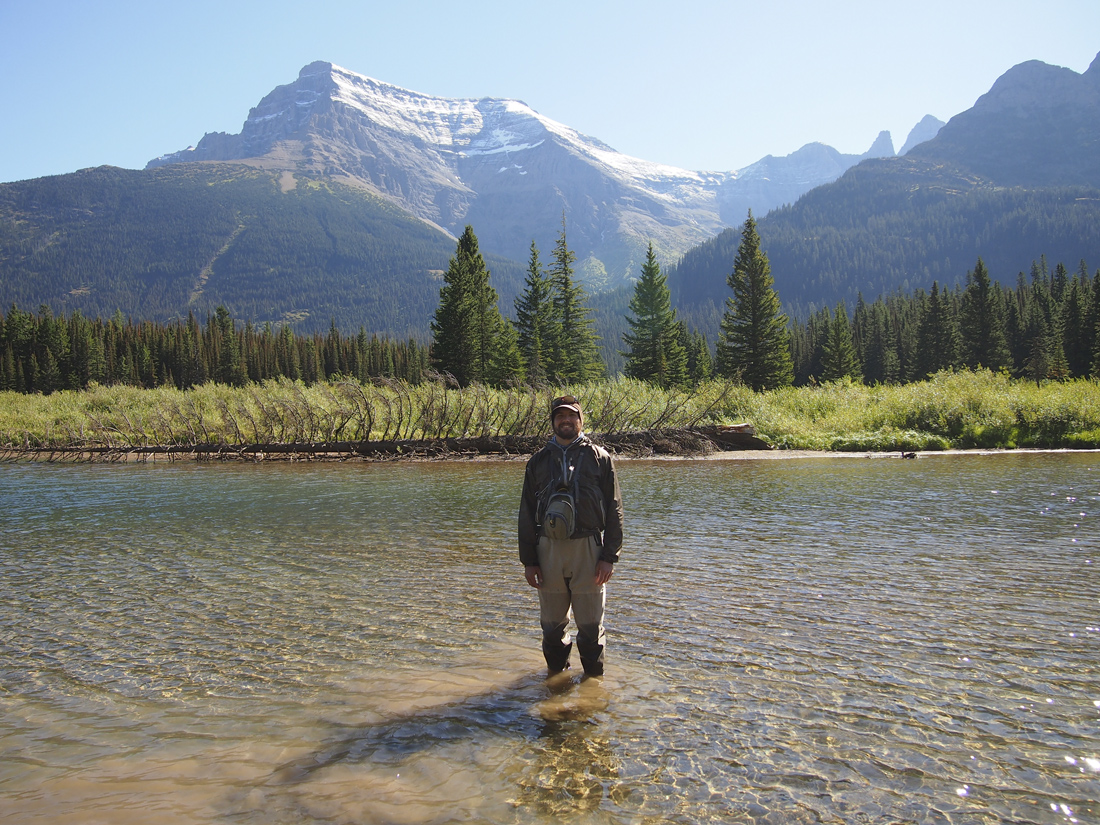