You look so stupid. Buffs are dumb. Why are you wearing that trout fishing? Are you trying to be a gangster? Just wear sunscreen! Any of these sound familiar? They might if you’ve ever worn a buff or a flat-brimmed hat while fishing and posted a picture online.  Now, I’m going to get this out of the way now and say that I wear both buffs and flat-brimmed hats, but that’s not why I’m writing this. This isn’t a “tell me why you’re being mean to me!” post cause I genuinely, from the bottom of my heart don’t care what some stranger thinks of me (a stranger) based on what I wear. Not even a little bit. It’s a topic that’s come up in a number of different ways lately and I just wanted to open up a subject that I’ve poked fun at for awhile for discussion. This post is about the weird infatuation that anglers have with critiquing other anglers’ wardrobe.

The Haterade Distribution Network Seems to be Growing

Now where’d this come from? Well if you’re an avid angler and spend time online or around fishy circles you may have heard the phrases mentioned above or the term “bro” thrown around referring to a “type” of angler. The first time I heard an angler use the term “bro” my eyes rolled to the back of my head, did a floaty no-grab 180 and I shook my head. Maybe I’ve had my head in the sand but I didn’t even know that was a thing (in fly fishing)! Apparently we recently stepped into a new age of elitism. Now it’s not that serious. Elitism doesn’t really effect me. It doesn’t effect my love for fly fishing or how much I enjoy my days on the water. However, it does cause a face palm every now and again when I’m perusing the internets. Example: the pic below was posted online (happens to be me). One of the comments? “I hate bros.” I was dumbfounded. #15ish laker on the fly and the only thing dude can muster up is “I hate bros”. Fur realz? Don’t know the dude, nor dude know me – I think that most hater/hatee relationships are the same. What possesses one to overlook everything in a fishy photo and focus on someone’s choice of apparel? In short, I have no idea. Do they not even like fishing? Are there a bunch of closet Joan Rivers fan club members in the fly fishing community? Are dudes wearing flat-brimmed hats actually gang members that steal and sell drugs to children? 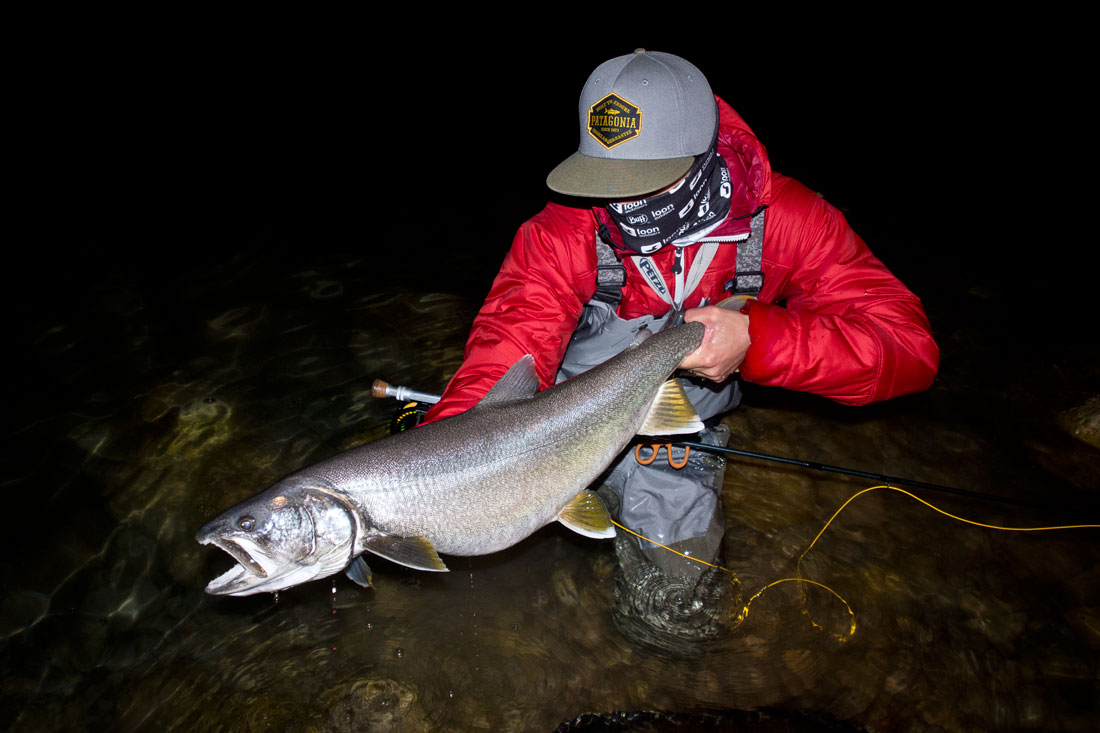 So there’s a lot of mixed feelings out there regarding these small pieces of tubular breathable fabric and uncurved pieces of headwear. Is all the hoopla justified – both the popularity and the accompanying hate? I’d like to briefly address both separately.

Flat-brimmed hats – a very common style of hat that’s been around for decades. I personally don’t think I’ve worn a “traditional” curve-billed hat in 20 years. Don’t really know what to say here. They’re hats. Their brims are flat (or less curved) instead of fully curved. Some say it’s a trend but I’d strongly beg to differ. I think it’s just more reflective of the individuals that are fly fishing. There are obviously more young folk getting into our sport as well as those of  different walks of life.

For a good portion of my life I was immersed in the free skiing/snowboarding community. This type of “hate” was common there. Whether it was pants that were “too tight”, skiing with no poles, and the list goes on, it seems that there were countless reasons to bag on other skiers/snowboarders. There is a big difference, however. The snow-sliding community consisted mostly of people between the ages of 14-25. With the buff and hat ordeal (and all the other trivial nit-picks in the fly fishing world) we’re talking about mostly guys over 25 – with a good portion over 35. So why are grown men bickering and back-biting over each other’s choice of apparel? In short, I have no idea. How is it different from bagging on people for wearing collared, button-up shirts? Or t-shirts? Or basketball shorts under their waders? I don’t hear people talking about that.

Fly fishing is rad. For a million different reasons. Why is it that we let the most insignificant parts cloud the awesomeness of the sport? Any ideas? I’m fresh out.

We want to hear that you think! Take the poll and share your feelings in a comment!