Perched atop my lookout, I’d seen this fish cruise in and out of this backwater. A healthy rainbow wandering slowly and occasionally swallowing suspended morsels or going tail up for one off the bottom. It’s always fun watching fish doing their thing – especially when they’re actively getting their eat on. While surveying the water patiently for him to return, I tied on just what I thought would do the trick – a scud missile. Afterall, the troutskies love scuds! Before too long he came moseying back and I promptly fired the missile and it plummeted a few feet ahead of him. It’s hard judging distance when casting down to a fish but I lucked out. He immediately he showed more life than I had observed during my surveillance session and  swam right up to my bug that was slowly sinking near the water’s edge. From my elevated position I saw the white of his mouth as he chomped it in. My line seemed to come and come as I raised up for the hookset. It’s not often and a really unique feeling setting on a fish from high above the water. It was fun to have an undistorted view of his bout against me. He ejected himself from the water and my haul from above probably added to his boostability. After a moment or two of playing him from the top I scurried down to the water’s edge where I debriefed him accordingly. If you don’t do it often, I definitely recommend, where possible,  finding yourself a good vantage and be your own spotter and cast down to some fish. It’s a hoot. 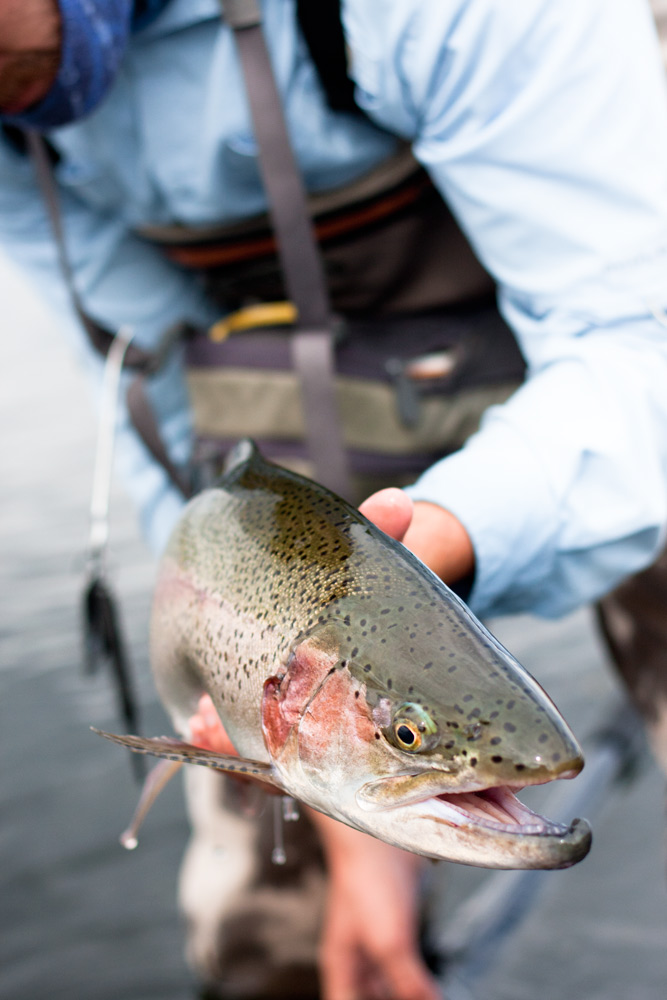 Those who know and fish with me know I have a problem, an addiction really…it’s called chucking streamers! There is nothing quite like a fish tagging a streamer. Sure, dry fly fishing is amazing but given the choice to me its clear: I’d choose a streamer take over a dry fly eat pretty much any day. Hold on people, to each his own and there are many that would disagree but to me there is nothing like the aggression of an all-out assualt as a trout lays the smack down like a WWF wrestler on some poor little streamer. The wake, splash and water spraying everywhere as a trout loses all caution just gets the blood pumping. 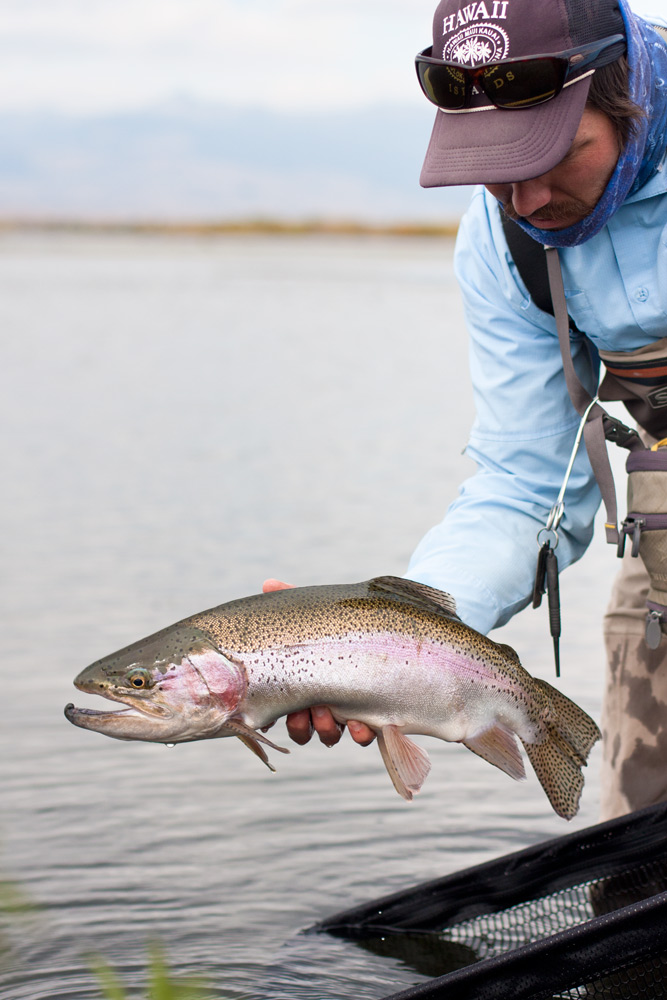 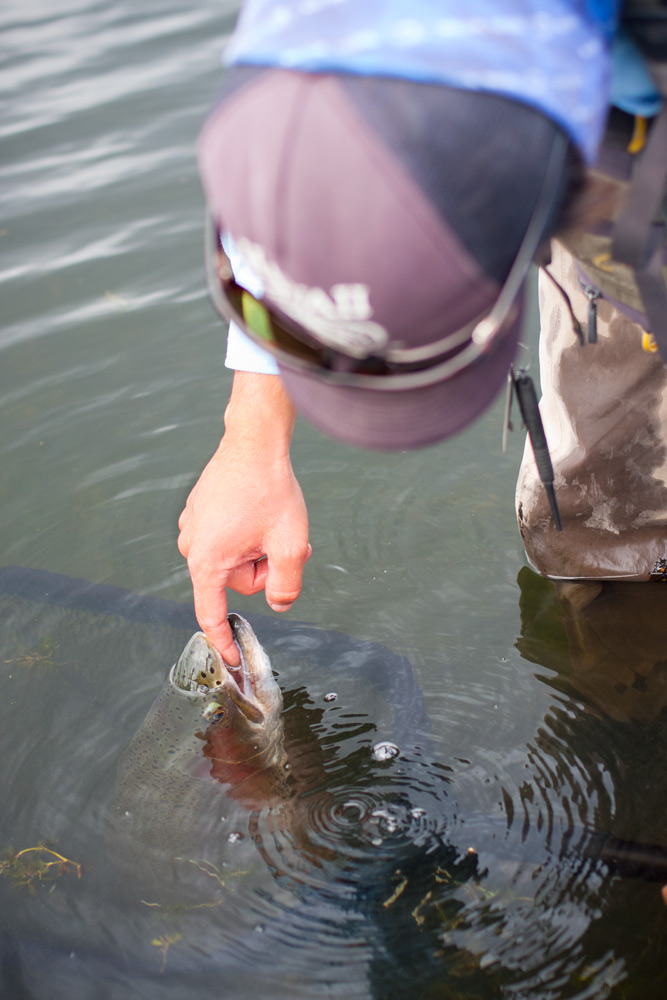 The name of the game that particular day was tossing meat chuck and duck style. Nate and I were chasing big bows in a familiar body of water that we fish far too little to satisfy. Not much was happening but honestly that was less than a surprise as quick fishing is rarely the tempo at this system. Skipping around locations until things started happening was the norm. As I came to a new section of bank I thought, “this looks fishy”. Making long casts to a moss bed along the bank produced a few follows and one hook-up and then…. nothing. Changing location yet again with the thought that on the way back this area would get another workout with a streamer. A few hours later working back toward the car brought me to the now rested area. Nate had walked over and we both began casting. Working that same weed bed proved productive with one of the coolest takes I’ve expierenced! As the fly made its way along the weeds a GIANT wake formed – like  rollers through a kelp mat on the California coast. Swing and a miss as a thick trout blew out from beneath the green astroturf and slashed wildly. Slowing the retrive almost to a standstill gave chubbs peterson the chance he needed resulting in a hookup with only a few feet of line hanging from the rod tip. Water and weeds flew into the air as the battle began. A few runs later and a last ditch atempt to burry himself in the safety of a matted plant mess ended the engagement with a chunky bow laying prisioner in the net. Highfives, pics and a release! Boom, that was awesome son! “What a take”, I yelled. As previously mentioned, I heart streamer fishing!!! 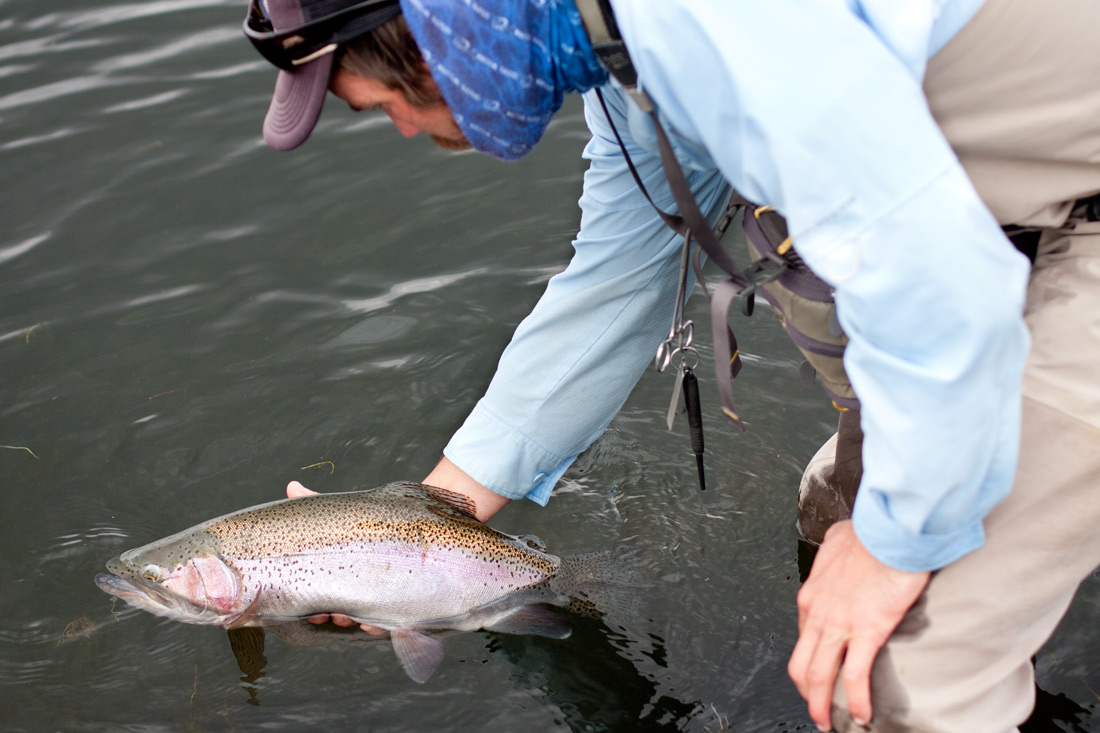