It’s one of those experiences you can’t believe even happened.  I think back and simply shake my head.  Hours and hours of preparation for what was to be one of the best trips of my life – even if it played out completely different than I originally thought.  Here was the basic idea: float the river of my dreams with good friends.  The outcome was a lot of hard work, crazy situations, amazing fish and friends that are now even closer!

I looked down the canyon at the raft we had just abandoned that now lay on the side of the river and thought, “how did it all end up like this?” Rewind a few days earlier and three of us (Jesse, Richard and myself) were floating down some of the best trout water you can imagine.  The cutties were rising to the dry and Jesse was all over it.  In every nice pool where you knew a good cuttie would be, there was, and he hooked them.  I was on the oars making sure we stayed in position, constantly looking for the next pool or hole we could pull over and fish.  At each deep hole we would pull the boat up on the gravel and prospect the water to see who was home.  If anyone knows me I am a streamer/nymph junkie who loves slinging big stuff for big fish.  There I said it, I am one of those quote on quote big fish elitist types.  I like the challenge of finding big fish and trying to get them to hand.  Now don’t get me wrong, the dry fly has its place and I enjoy seeing a fishing rise after my bug but let’s be honest…who doesn’t love a solid game of tug o’ war? Back to the subject at hand, things were working out.  Everyone was having fun and getting into fish.

Toward the end of the first day we rounded a bend into a familiar pool, and there were a few guys fishing it.  We pulled over and hauled the raft through the shallows to preserve their hole, as we did one of the guys asked what we were doing in a concerned voice.  We chatted as he warned us that the river ahead had some technical water and the last people ended up taking out and spending hours hiking all their gear up the side of the mountain to get out.  Not really an option in my book.  During the planning, looking at maps and studying out the trip there was never anything that stood out as a red flag but, the concern in his voice was apparent and genuine.  We discussed and decide the only thing would be to keep moving and fishing until we hit the bad section and assess it ourselves.  The current lazily floated us through deep pools and long riffles, some yielded fish and others were not so generous.  There were a few holes that were so full of big fish it would have been insane not to fish them even with the looming danger down river.  After all that is what the trip was all about right?

I have heard a picture is worth a thousand words so I will not make you read thousands of words when the camera will do it for you.  I will only say this, coming tight on big bull trout in a deep pocket is something that keeps me coming back every year and luck was on our side.

As the sun began its decent we decided it was time we got moving so we could check out the water while the light remained.  It couldn’t be far from what the guy had said so…onward.  Sure enough, there it was, right where he said it would be. A big nasty mess of boulders the size of small houses with logs thrown all over for good measure.  There was no way around it so we unloaded the boat and began lugging stuff around to set up camp for the night. 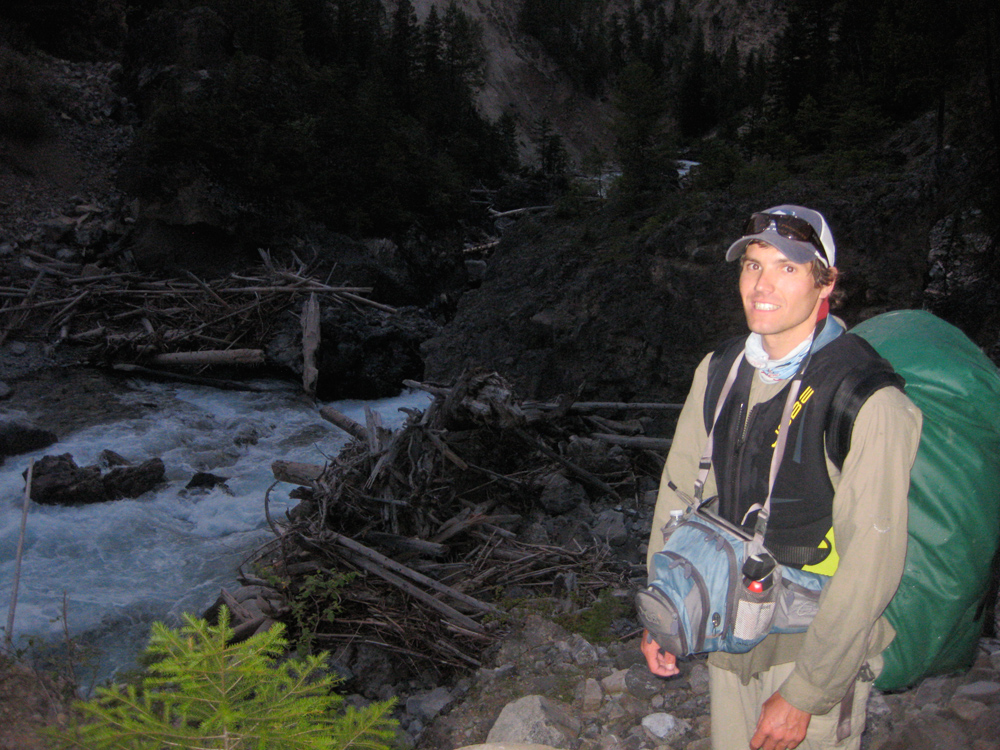 In the morning we portaged the raft for maybe half mile of the roughest shoreline I’ve seen in a long time. We eventually got on our way, but smooth sailing was nowhere in sight.  Over the next 2 or 3 mile of river we went over, under and around logs and rocks that were too hazardous to try and float.  It took some serious sweat, but we made it and soon enough the float was on again.  As fishing commenced life was once again good but…of course it would not last.  Later that day while fishing a good hole we talked another guy who was working the bend below us.  He informed us there was a spot downriver that would most likely flip our boat, but other than that there was no apparent danger.  Oh great, I thought. 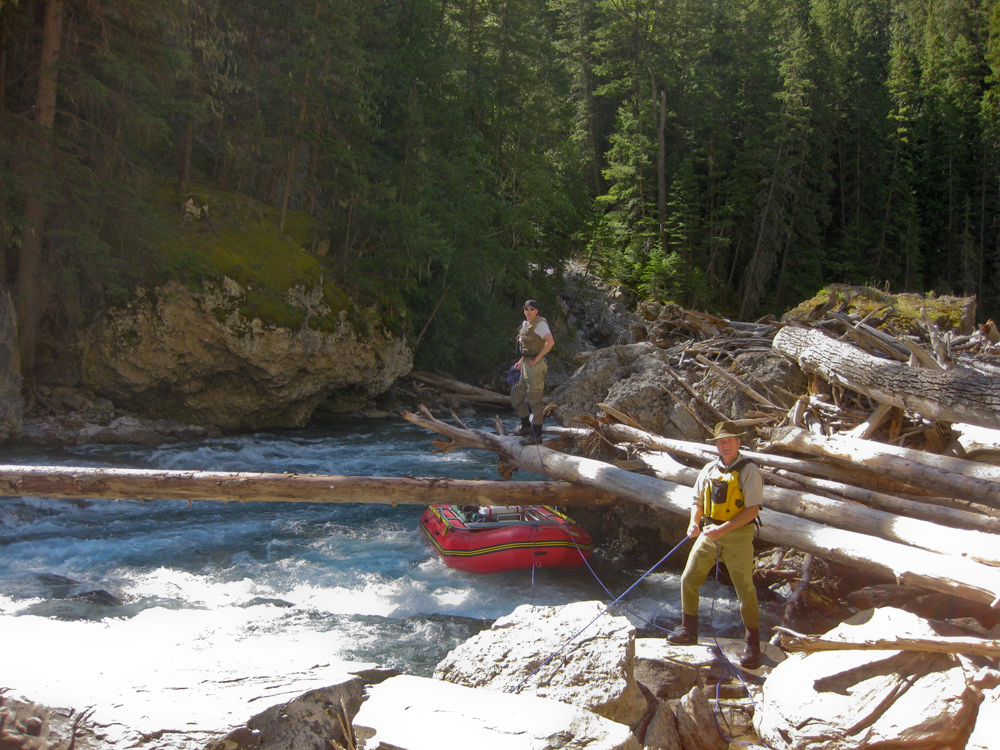 We had planned to end the trip that night and we hoped to still make it to the take out as Jesse was supposed to leave for home and Richard and I would be continuing on, but the river had other plans.  We started down and were making good time, I paddled hard even in turbid water to ensure we would make the take out by dark.  The river slowly began changing on us again.  The rapids started to get more and more technical with rocks scattered all over.  Around one bend a bear was spotted running for the trees as we came into view.  The perfect way to see a bear: at a distance and floating as to almost eliminate danger.  Time marched on and some 3 hours later the river had gone from a nice mellow float to me rowing the most technical water of my life.  There came a point when the rapids were too much and the choice was made to allow the raft to go down being led by a rope.  Things were moving along until the boat hit a tight spot and a strong current flipped it like as though it were nothing.  We scrambled to right the boat but it was too heavy.  I ended up crawling under the raft to unstrap all of our stuff one piece at a time.  Everything was still in place although when I pulled the dry sack out the force of the water peeled it open, leaving our sleeping gear soaked.

This is were the fun begins!  We talked it over and made a plan to walk out of there since we were now only a few miles from the take out.  We gathered what we could carry and started to walk out, but something just didn’t feel right.  Now, I know some readers may not believe in God but I do.  I felt we needed to pray to make sure walking out was the right thing for us to do.  I offered a quick prayer and the distinct feeling came to my mind, STAY!  With that in mind I looked around and said ok guys this is what we need to do.  The canyon is getting dark and we only have about 2 hours of light left until the sun starts going down.  We need to get to the top were it is flat and hang our stuff out to dry.  Here is the problem, the way up was steep and it was all loose rock and we are carrying heavy packs full of wet gear.  We began climbing out of the river bottom to a huge flat meadow at the top, but as we started up I could see we were not alone.  There was a black bear climbing down the steeps toward the river.  We shouted and yelled at the bear and he headed back up.  We followed suit, but about half way up we saw him peering over a small cliff at us.  We scared him off a second time and continued upward.  Once at the top we picked a spot to leave our food and walked a little ways to our camp site.  Sleeping bags, clothes, shoes and everything else that was wet was hurried and hung out to dry.  There we stood, 3 men in underwear with all our gear drying in trees.  A nice warm breeze came in and helped begin the drying process. 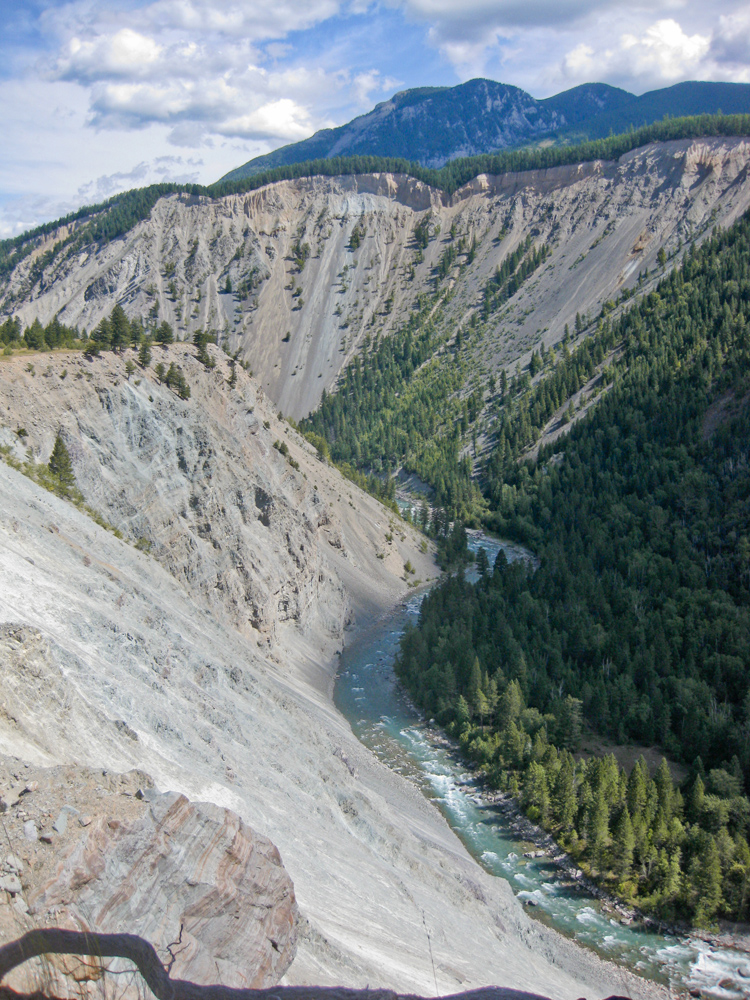 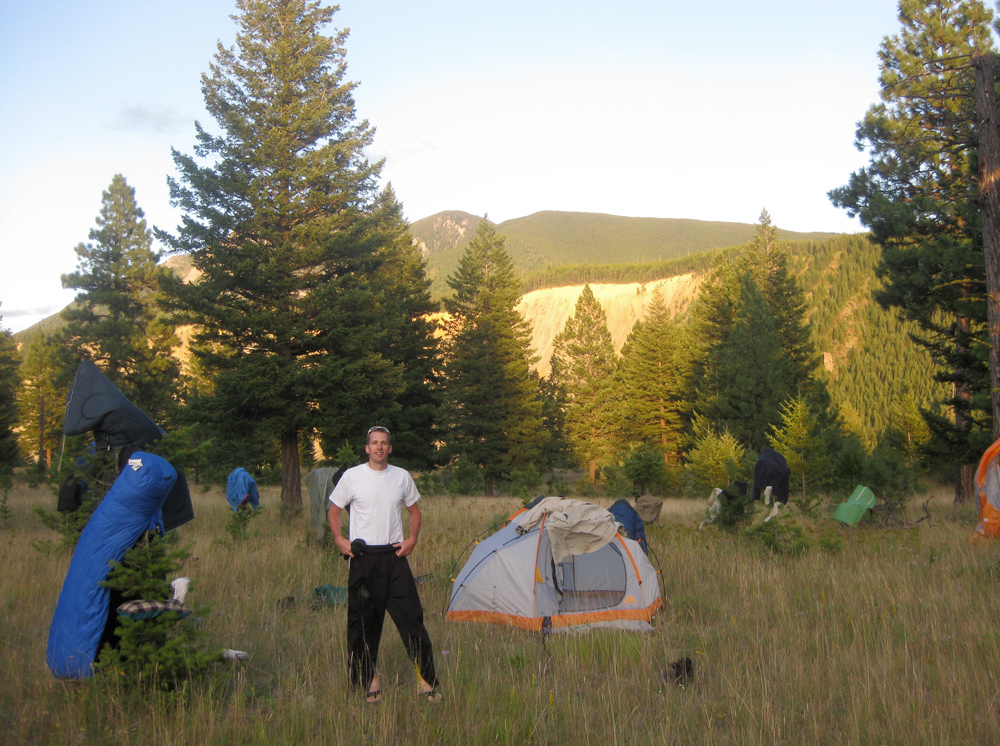 Back to the kitchen to eat while the dyer was running.  After a hard days labor food never tasted so good!  It must have smelled good to because not 5 minutes passed before our friend Mr. Black Bear was snooping around.  Screaming seemed to finally work, he took off and that was the last we saw of him.  Shoeless and in my underwear I climbed a tree and hung our food in the dry bag 30 feet off the ground to ensure we would have something to eat in the morning.  Unsure of how wet our things would be back at camp we started back. It was a miracle but all of our soaking gear was dry in little more than an hour.  Warm sleeping bags and a dry tent were an amazing way to finish the day – it could have been a rough night.

We talked about a battle plan for the next day and decided to play it by ear. Jesse’s wife can be a worrier so we figured that because Jesse was supposed to be home already that search and rescue would very likely be on their way in the morning.  Sure enough, early the next morning we spotted a chopper in the distance but it passed too far to the side to see us.  Around noon it went by again but was in the canyon scanning the water and missed us a 2nd time.  We stayed put as they were obviously looking for us and about 5 o’clock they spotted us and picked us up.  All the guys were super cool and although we were super embarrassed they were happy to find 3 healthy people rather than bodies.  “All’s well that ends well” said one of the search party as we packed our stuff before they choppered us back to our car.  All and all it was an amazing adventure and I am so thankful everything worked out well! A huge thanks goes out to search and rescue guys all over the world, especially the amazing team that picked us up!  I have been looking for adventure all summer and I guess it is safe to say I got it.